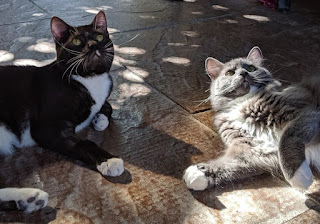 Kilo & Daphne - LBF
Old Aids (aka the Leukemia area) received quite a number of new residents this year. Grey and white Daphne came in during the spring. Long-haired tuxedo Cooper arrived, was caged briefly and was adopted within a week of release.  Short-haired Kilo arrived in the summer and appears to be a tuxedo, but on closer inspection has smoke tabby markings. Spry siblings Domino and Banshee were transferred over from the side room of the Moore House, and very shortly afterwards adopted. All were youngsters, and very lovable additions to the FeLV playground. 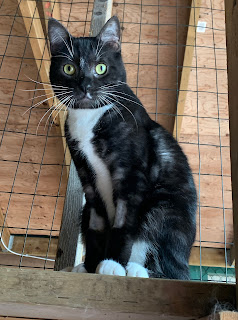 Kilo on the catwalks - PC

Kilo is a friendly boy with a happy outlook on life.  His pastimes include: exploring the catwalks and staring out the window, in hopes of grabbing attention, playing with or without the other cats, being held, and sneaking onto your back if you’re next to his perch.  He’s another oddball feline who likes being picked up and carried - most of the time.  With winter on the way, he makes a wonderful cuddle buddy and hand-warmer. 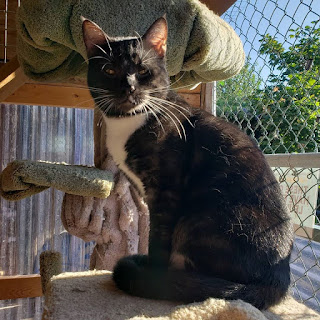 Initially, Daphne was known to be skittish, but super playful.  Now, she’s part of the door dasher club.  Want to be her favourite?  Bring her toy offerings.  Daphne’s hobbies include: testing out every toy in the room, looming behind you when you’re sitting on a chair, mooching for treats, giving humans leg rubs, and giving every cat a body rub, whether they want it or not. 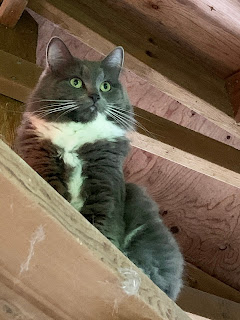 Queen of all she surveys - PC
You’ll notice both cats bravely hover around for treats.  Daphne might even push her way to the front!  Most new cats stay wary and remain furthest from the treat dispensing hands. I have yet to find food they don’t like.  Maybe some duck or lamb?  And be sure to bring enough for everyone! 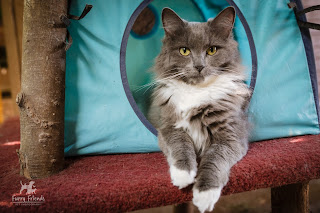 Come play with me....   MW
Playtime is always a thrill for Leukemia kitties!  Being young, Kilo and Daphne will try anything.  Wands, balls, catnip, crinkle toys, crumpled paper… they’ll chase and pounce on everything that moves!  As far as playfulness goes, Kilo competes with Daphne on who gets first dibs on new toys.  Smoochie might join in the fun, although he prefers one-on-one time.  (He’s a wise, older gentleman.)  While Kilo will share toys with other cats, Daphne prefers to keep them to herself.  Her favourite colour seems to be pink and she won’t hesitate to snatch those toys and carry them off. 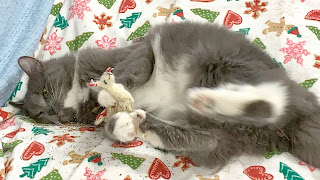 With a favourite toy - PC

When visiting the new cats, it's only fair to devote time to the long-time regulars Smoochie, Bear, and Dexter.  It would be upsetting if they see the new guys stealing attention away from them.  Being keen observers, Bear and Dexter will make very loud complaints that your ears won’t soon forget.  Twenty or thirty minutes of visiting time is plenty to enough to spread around to the dozen plus cats.  We want everyone to be in good spirits, since stress is detrimental to their health. It's a good place to make a new friend or two.  Perhaps there’s room in your home and heart for a FeLV+ kitty?