As many of you have probably heard, either directly from friends at RAPS or via the RAPS Facebook page, the sanctuary lost one of our most prominent residents this week: our dear Mario.

Mario was famously loved by the other cats at the sanctuary, and would rarely be seen without a few members of his harem trailing after him as he sauntered around the place or tucking themselves in around him whenever he paused somewhere for a snooze. Shy ferals were particularly fond of him, and his laid-back ways even taught a few of them to like us humans a bit too.

Sadly, all the love in the world, both human and feline, couldn't stop the cancer that took him away from us.

Mario was such a big presence at the sanctuary that we'll all be feeling his absence for a long time to come. Here are a few photos from the past months celebrating our Romeo and showing him in all his glory, surrounded by cat friends who adored him. 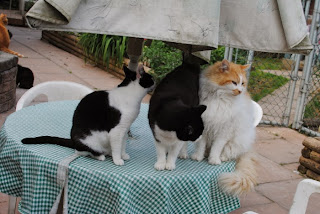 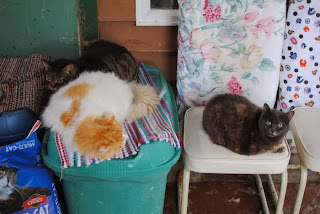 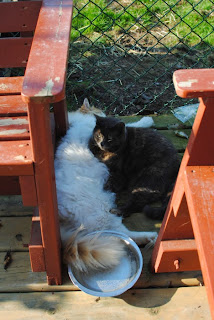 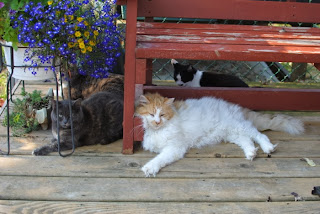 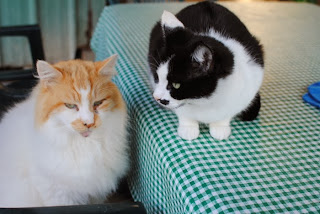 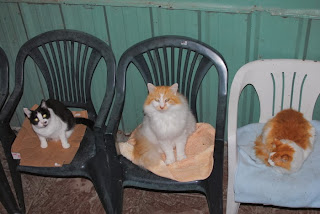 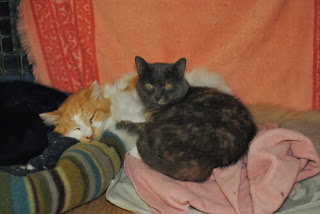 Thanks for all you've done big, fluffy, gentle buddy. We'll miss you like crazy.

Email ThisBlogThis!Share to TwitterShare to FacebookShare to Pinterest
Labels: Mario

Buster, who was very upset and aggressive when he arrives at the cat sanctuary back in April, has made some baby steps in the past months in the direction of being a nice(er) cat. 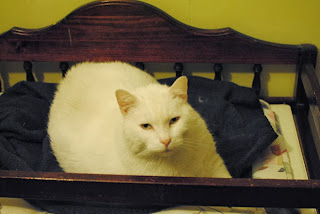 Staff has been working to help him be more comfortable and to minimize his agitation. His hind end can be a bit sore (X-rays revealed a bit of a deformity on one of his hips), so we limit the pats to his front end. He was found to be scared of the full sized broom, so a small hand brush was tried. He can get scared when people move too quickly around him, so we aim for slow and gentle.

Buster still has his own room where he can be away from other cats, but recently staff have been opening the door so he can venture out if he wishes.

A nice enclosed porch area has been added to the building Buster lives in, allowing him to sit not just outside his private room but outside outside, where he can feel the wind in his whiskers. He apparently quite enjoyed the porch when he was let out there, staying for a few hours in this new territory before heading back to his room. 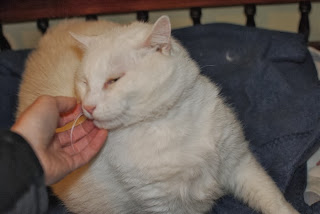 When I visited him tonight, he was welcoming and happy to receive a few chin tickles. And then he was done with me and my big camera, and let me know with a series of growls. Unlike when I first meet him in the spring, though, he didn't feel a need to follow and menace me on the way out. 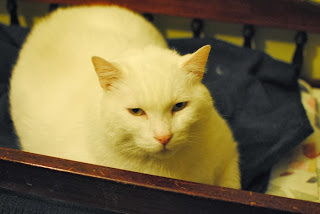 Email ThisBlogThis!Share to TwitterShare to FacebookShare to Pinterest
Labels: Buster

Sandy and Pebble arrived at the sanctuary in March as feral kittens. RAPS worked to tame them, and now they will allow pats from visitors to their cage.

The pair still hasn't quite got the hang of this whole comfortable-with-humans thing, and turns to hissing and hiding when the cage door is opened.

But there's a note on the door saying not to be fooled by the hissing. And indeed it turns out that these kitties don't mean it (much). Sandy stops hissing when touched and will tolerate pats, and Pebble's hisses immediately turn to purrs and show off dances.


Note - the two were never really comfortable with human contact, and were released into pen 4 with the other ferals. Let's see how they make out!
Posted by Claire at 7:23 AM No comments:

Luke is a feral who came to the RAPS sanctuary about 10 years ago. When he first arrived, he shared a cage with Mario. 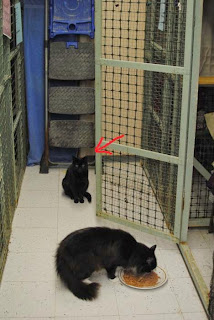 Luke has a clipped ear, which indicates that at some point he'd been trapped, neutered, and released back to wherever he was living. Later, someone must have felt the site was no longer safe or that he would be better off at the sanctuary, so he was trapped again and brought in.

He still won't let people get too close, particularly at ground level where he can't be sure that touching won't lead to grabbing. Up high, though, he's a little more confident, and allowed me to get a few photos of him before he scooted off. 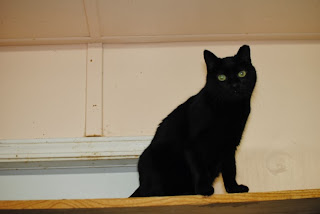 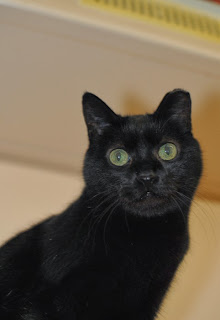 The weather's getting chillier and the cats have moved from sprawling on warm wood and stone to cuddling up in the many--many--cat beds around the sanctuary. Some cats love cuddling with as many cats as will fit in there with them, while others prefer to spread out in a bed of their own. Here's a sampling from the past couple of weeks. 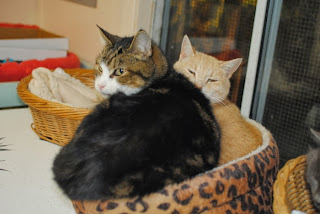 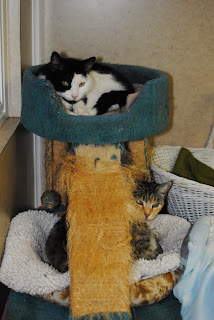 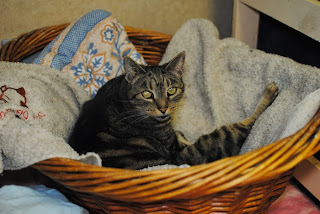 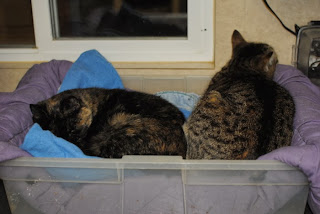 Sida is one of around 20 cats who came from a feral colony near Princess Street in Steveston. Others include Prince, Cha Cha, and Maddie (but, ironically, not Princess).

Sida usually hangs out in the tea room and is not interested in making friends with humans. Leslie says she'll occasionally come into the doublewide if she wants to be given a treat, but even then she doesn't really want to be touched. Most of the time she'll just hiss if approached.

I got a chance to photograph her today because she's in a cage after going to the vet to have a couple of teeth extracted. She let me take a photo or two of her behind her drape. And then she me dismissed me with a hiss. 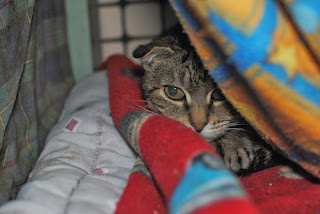 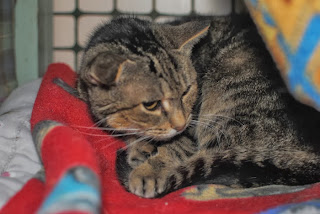 Posted by Claire at 8:56 PM No comments:

Sambuca came to RAPS at the beginning of October. It was hard to tell if she was semi-feral or tame but scared. Now that she's had a bit of time to settle in, we still can't be sure how she'll ultimately feel about us, but it's clear from her behaviour that she's had at least some experience of being near people.

Leslie's been able to pat Sambuca and even get her purring. I was able to get in a pat or two when I went into the cage with her dinner, but she was clearly fearful of me and seemed to hope I would go away quickly so she could safely venture out of the corner she'd retreated to and eat her food. She didn't mind me standing outside her cage, though, and even seemed curious about me. These photos were taken through the cage door. 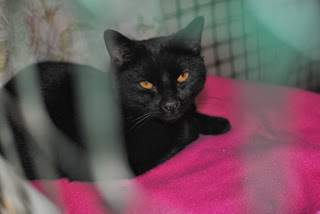 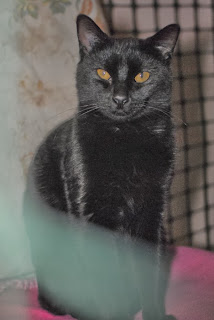 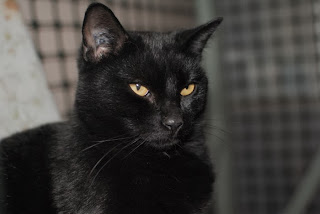 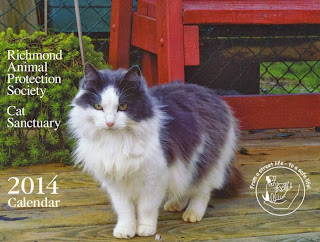 The calendar costs $15 and is available at the No. 5 Rd. shelter, the RAPS thrift store, and the cat sanctuary.

Can you spot the kitty? 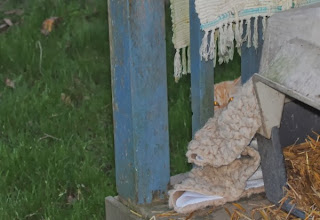 Yes, OJ is still feral and still not big on the trust. This was as close as I could get this week: 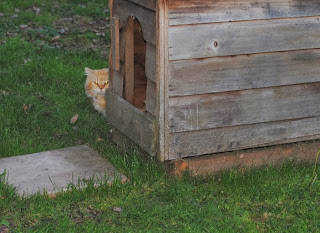 Others have had somewhat better luck, though, including Ann who's managed to entice him to accept a few pats. She's even heard him purr.

She makes it sound so simple! Still, we recommend leaving this move to the professionals for the time being -- during a patting session last week, another feral sitting nearby spooked OJ, resulting in either OJ or the other cat coming flying out at Ann in attack mode. I think all involved were rattled by the experience, but it sounds like Ann's already forgiven the cats, and I'm sure OJ is still open to to salmon-flavoured bribes.
Posted by Claire at 7:42 AM 4 comments: