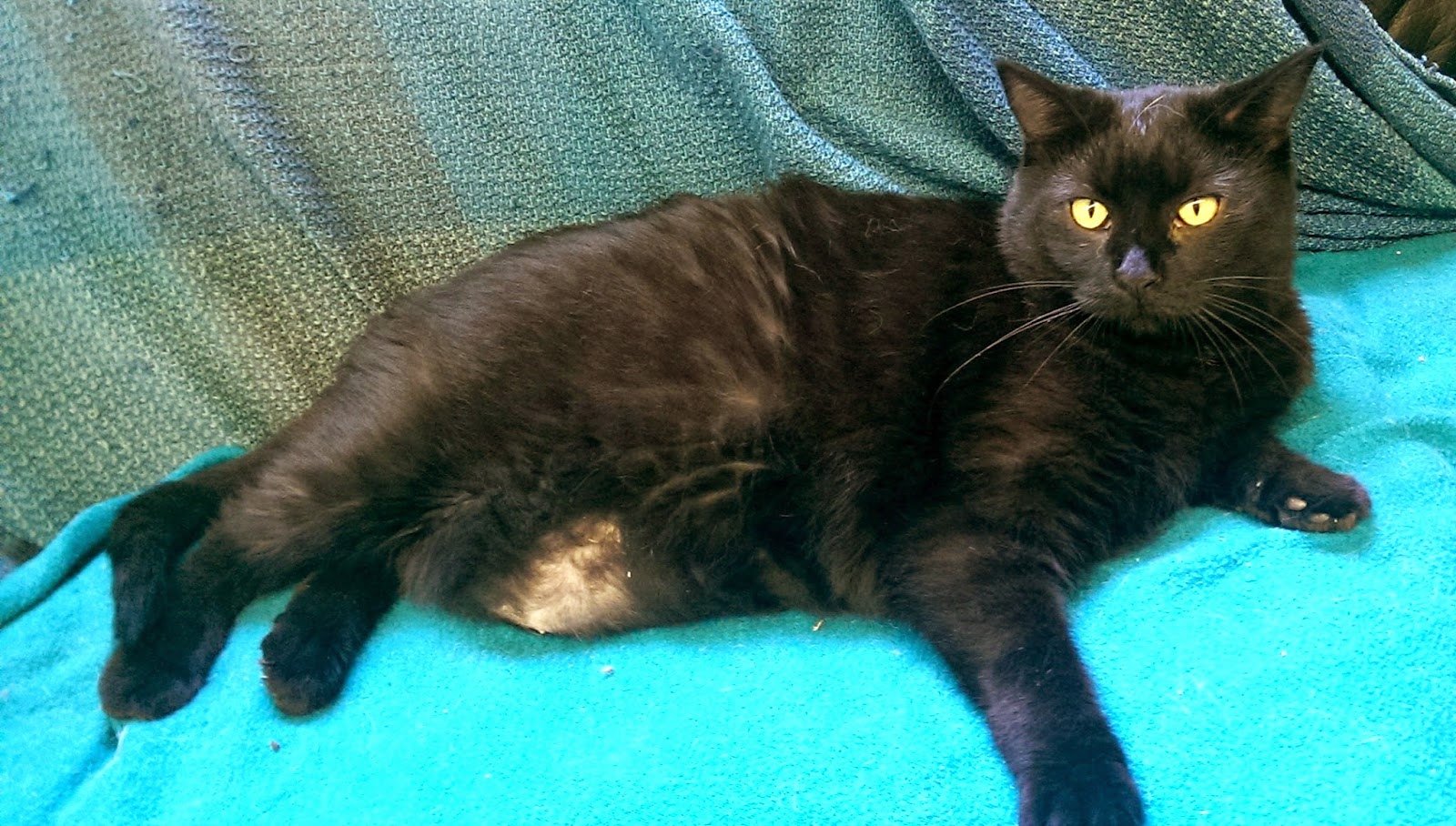 Since arriving at the Sanctuary in the beginning of July last year, Precious has charmed her way into the hearts of many volunteers and staff members.  Surprisingly, considering in appearance she is a nondescript black cat, she is easily identified by her outgoing and playful personality.  Her sweetness and adorably crossed eyes have made her something of a celebrity.  It’s a regular occurrence to see Precious take off from the far end of the double wide, charge out through the laundry room door and down to the back porch in the courtyard at top speed. 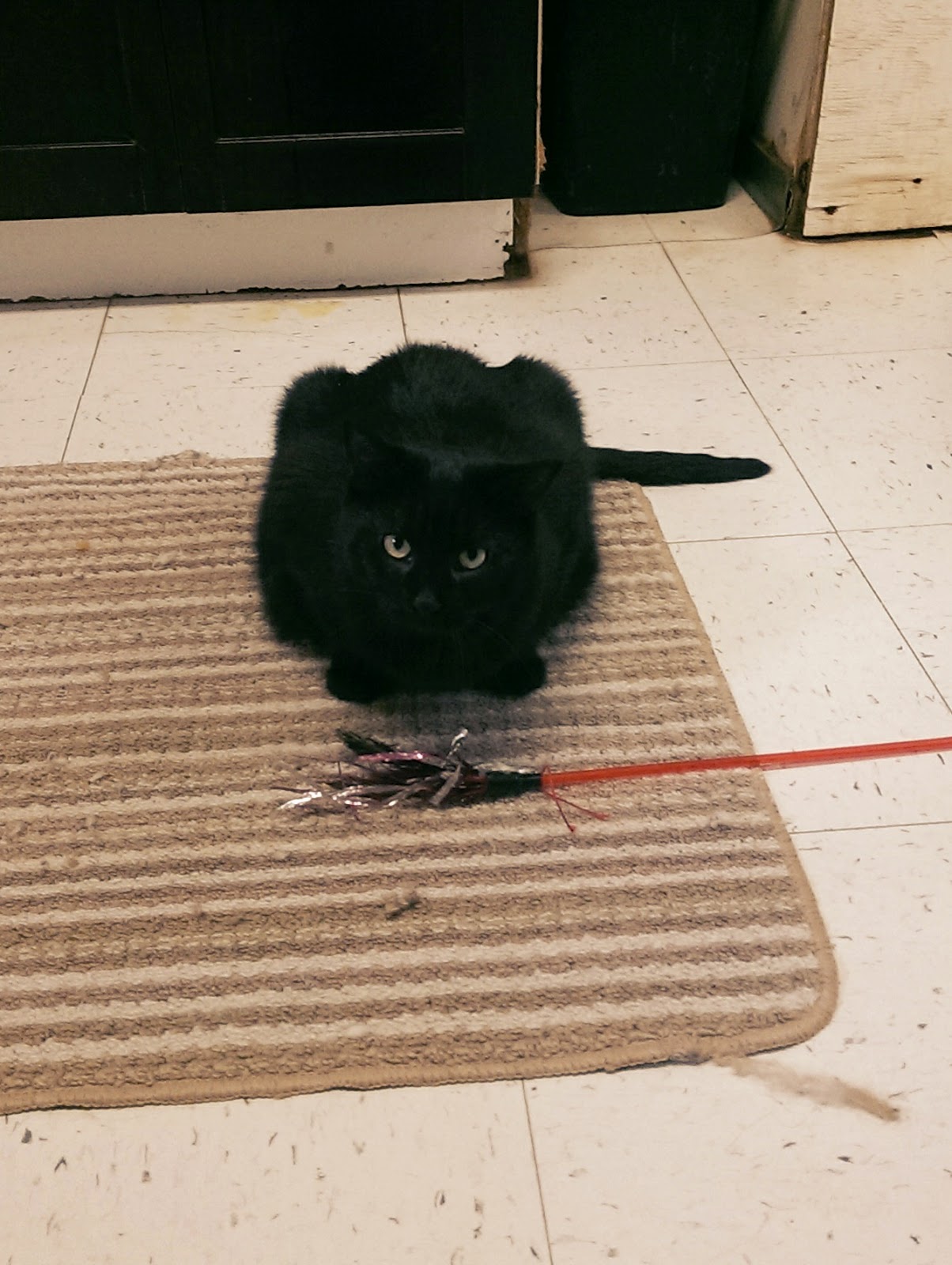 Along with being a sprint champion, Precious has claimed one of the red stick toys as her own.  When she hears the rustle of the feathers and tinsel on the top she’ll come out from wherever she might be sleeping to play.  Once she has won the toy out of your hands she will carry it triumphantly, either out to the back courtyard where you can’t take it back, or into the double wide where she will proceed to stuff it behind a scratching post. 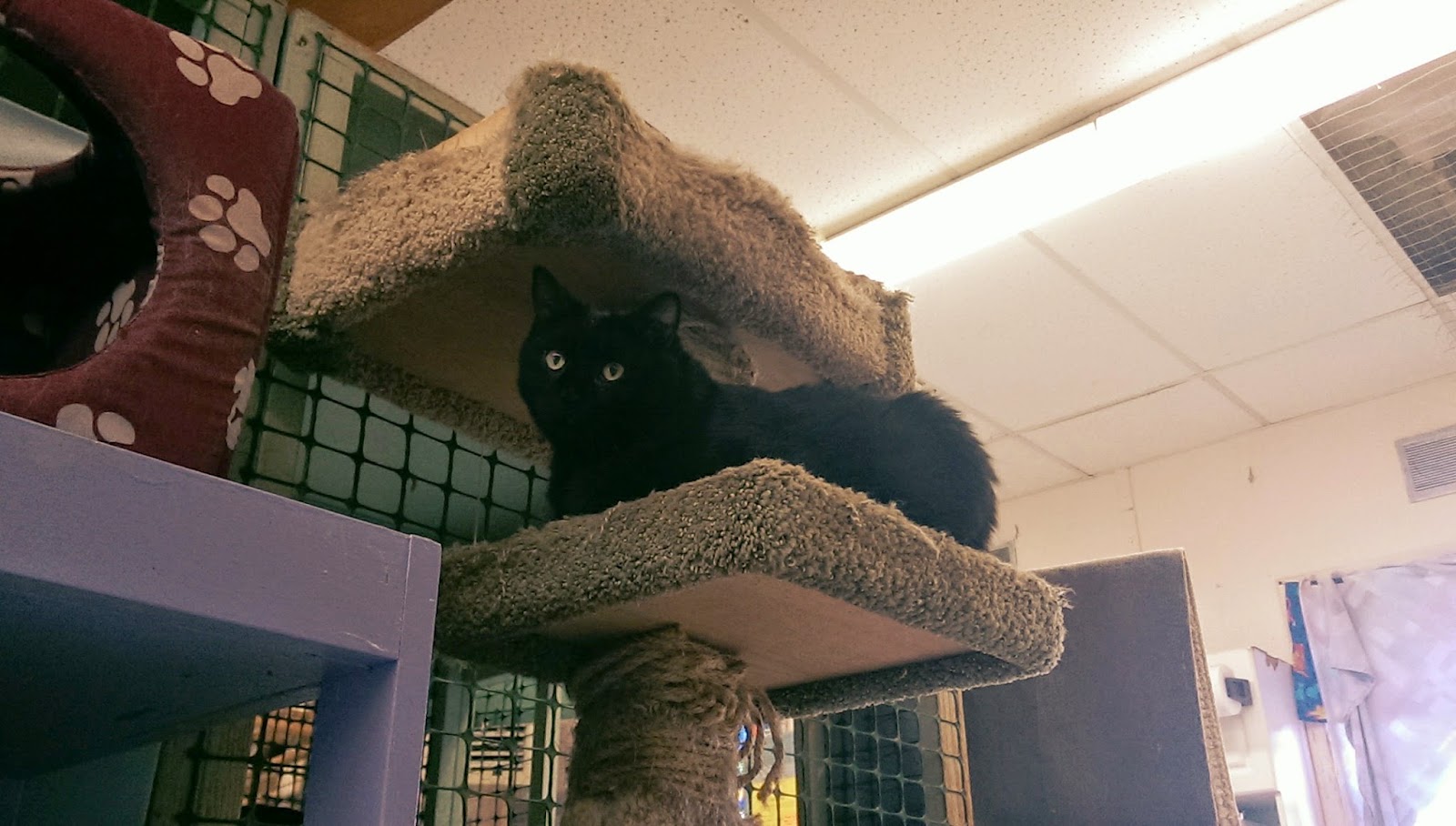 Today, while trying to get pictures of her for the blog post, I ran into the same problems getting her photographer as Claire had in previous entries.  She wouldn’t let me stop petting her to take the pictures!  At one point she climbed to the top of the scratching post in the double wide so she could put her paws on my chest and kiss my face! 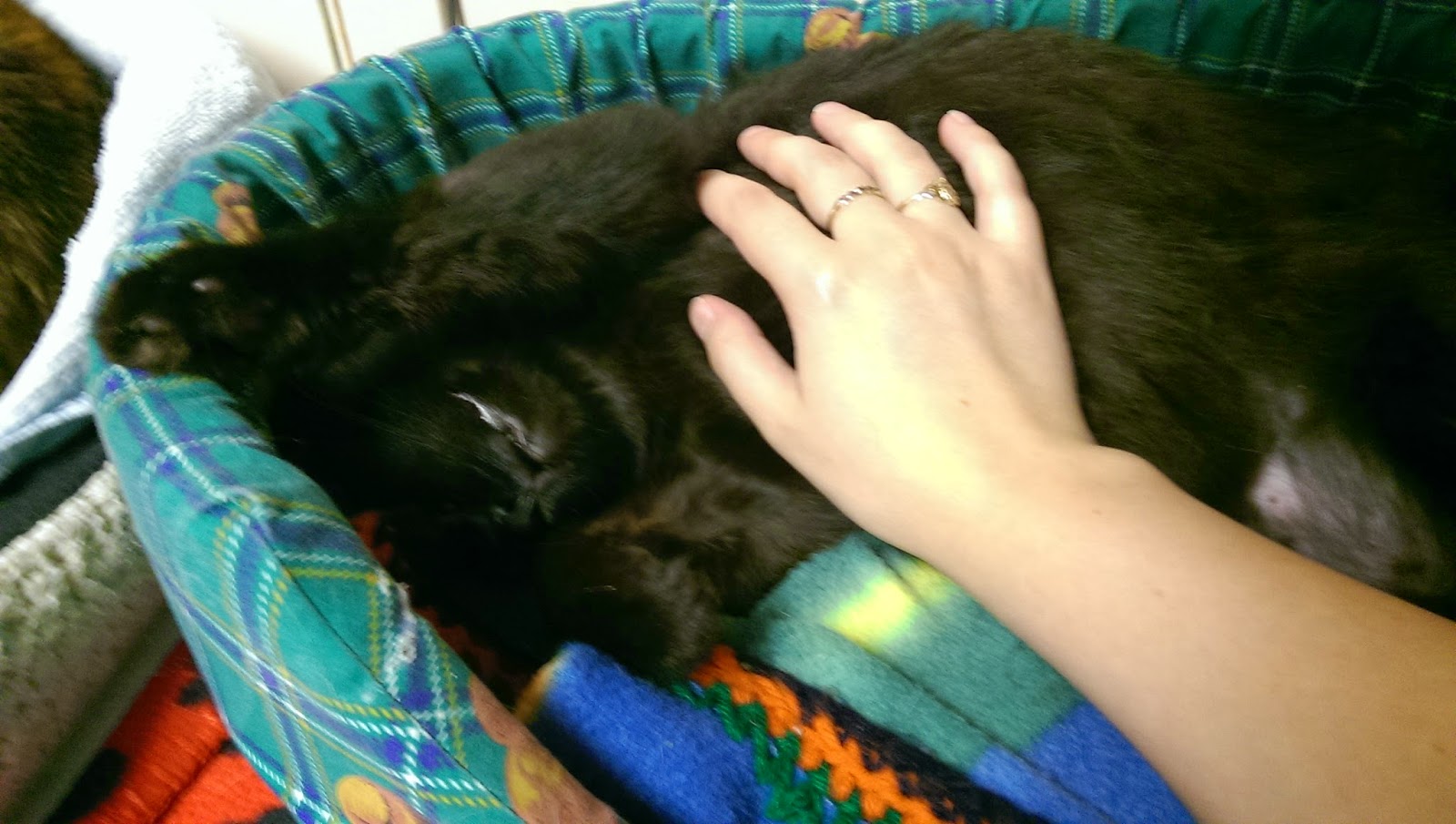 Precious also loves coffee time with the volunteers and can usually be found sitting with somebody lapping up attention or casually strolling around the table getting to know everybody who’s come to visit with her.

The Garbo Cats (“I Vant to Be Alone”) – front courtyard

Many people come to visit the Sanctuary with a certain amount of hesitation; they have visions of cats in cages and of feeling that they won’t be able to leave without “rescuing” one or more cats. They are usually blown away by the peace of the place, by the beauty of the surroundings (Club Med for Cats, one visitor called it) and by how well all the cats co-exist.
For the most part, the latter is true – cats have the reputation of being loners, and not pack animals like dogs. But that’s mainly a function of their hunting habits; you aren’t going to catch a mouse if you take a bunch of friends with you. Once the mouse is caught (and eaten) cats are quite happy to go back and lounge with their buddies.
At the Sanctuary, mouse-catching is (mostly) not an issue. Cats are all spayed and neutered, so have no battles to fight over mates; there is a constant buffet of crunchies, and canned food offered in the evening, and though territorial issues may come in, there are so many cat smells that most cats just give in and let be. 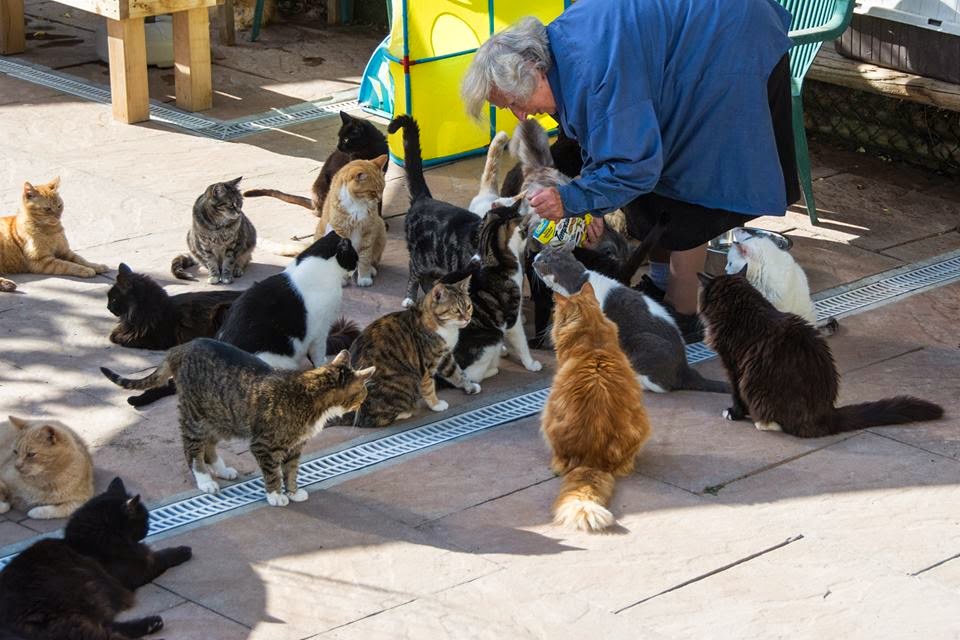 The Welcoming Committee - MW
But just like humans, there are introverts and extroverts in the cat world. Any Sunday visitor knows that there will be a welcoming committee at the gate, and a press of cat bodies saying “Stroke me! Feed me!” But look around the front courtyard and you will see a few cats who choose to keep themselves to themselves. 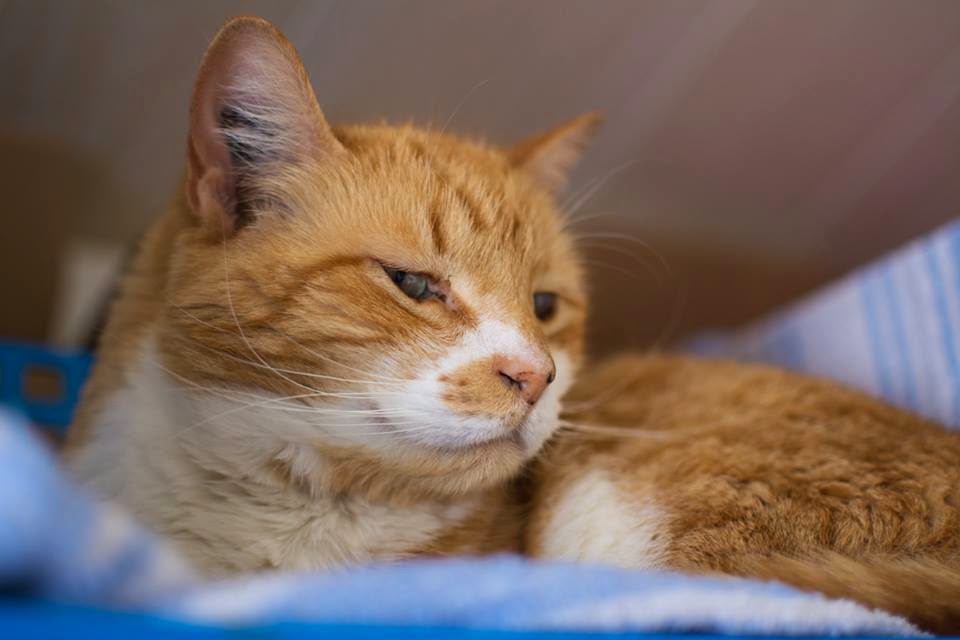 Tigger - MW
Tigger is often found by himself in a quiet corner, though he will sometimes come out and make himself more visible. He’s a beautiful big orange and white boy, who loves human attention just as long as other cats don’t get too close. Sadly, when that happens, the human is as likely to be a victim as the other cat. He loves to climb on a shoulder and nuzzle into the hair of his human carrier. 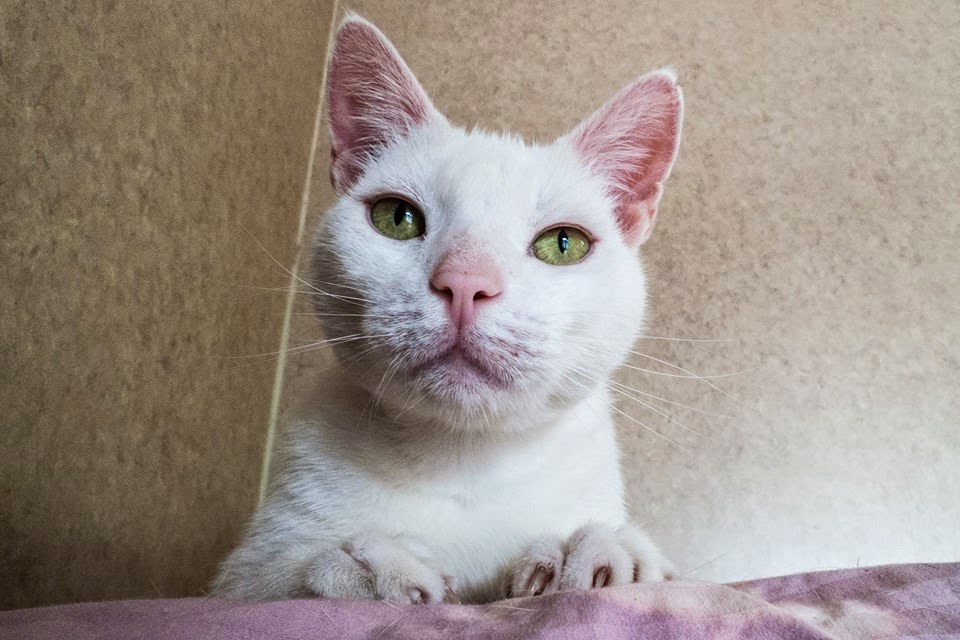 Timmy - MW﻿
Timmy came to us when his family took in an elderly relative who was allergic to cats. Timmy resented losing his freedom, and hasn’t settled very well – he often hangs out at the top of the stairs. Quite frequently on a Sunday, Timmy will pick one visitor and demand attention; that visitor is then expected to sit and cuddle for at least half an hour! 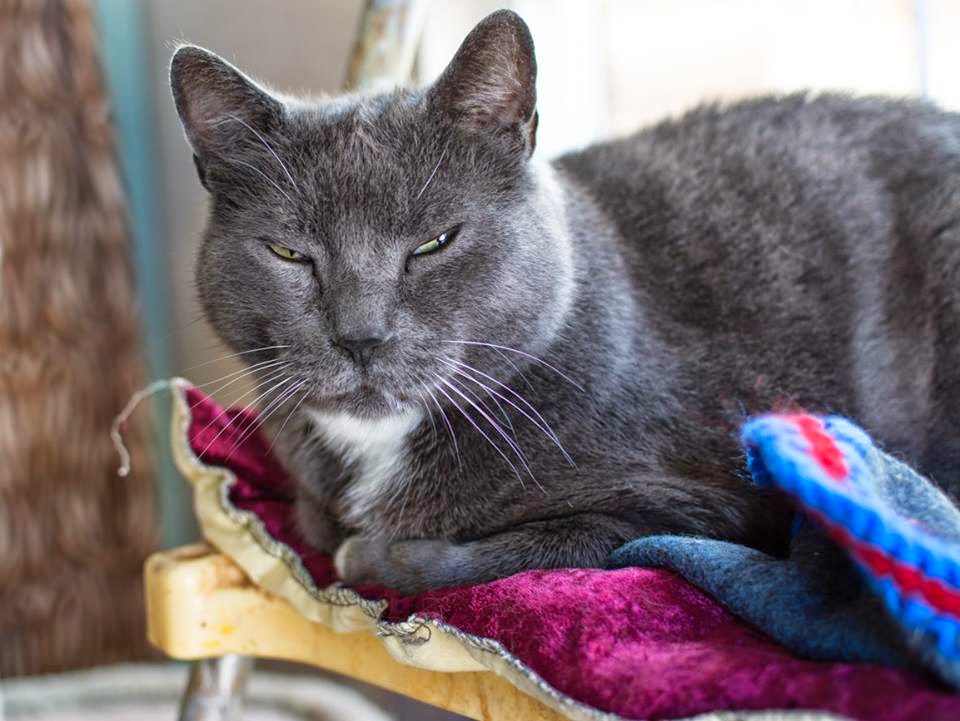 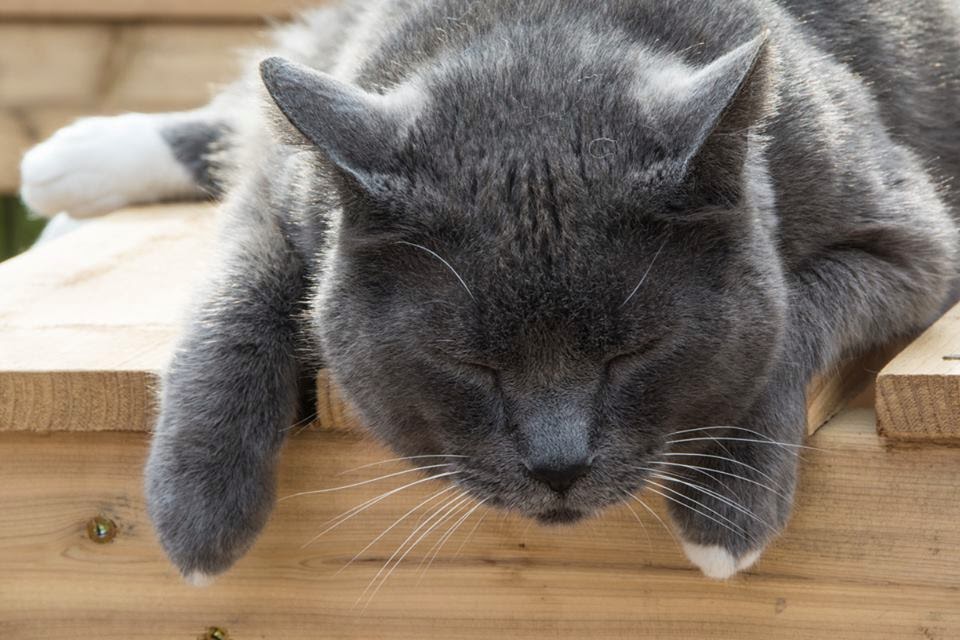 Leland - MW
Leland is still having a very tough time at the Sanctuary. This handsome grey boy does NOT like feline company, and lets us know it with a constant output of growls and muttering. He even needed to be medicated a bit at the beginning to ease his anxiety. But we don’t want to leave him on medication, and Leland just has to deal with other cats. He has his human favourites, though, and there are many of the staff and volunteers who will make time for him – in the right mood and with the right person, he snuggles like a baby! 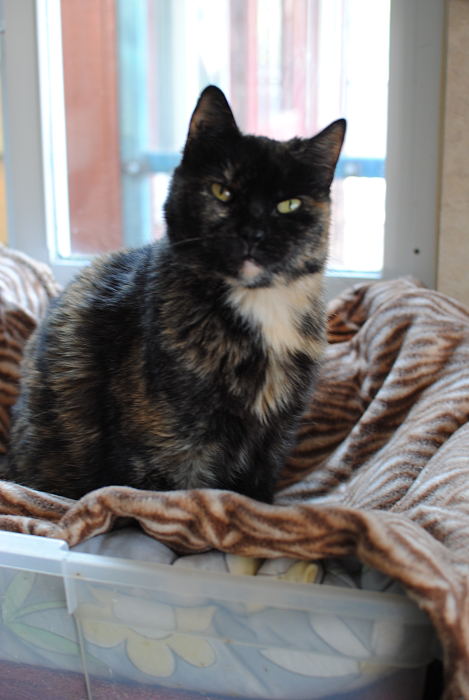 Treacle - CF
If you hear a spat going on around the Hill House, it’s probably caused by one of the smaller cats. Treacle is a feisty little older girl with plenty of “tortie-tude”. A regular supervisor of quality control at mealtimes, she’s one of the few cats that likes to be picked up and cuddled, but other cats get within paws-reach at their own peril. 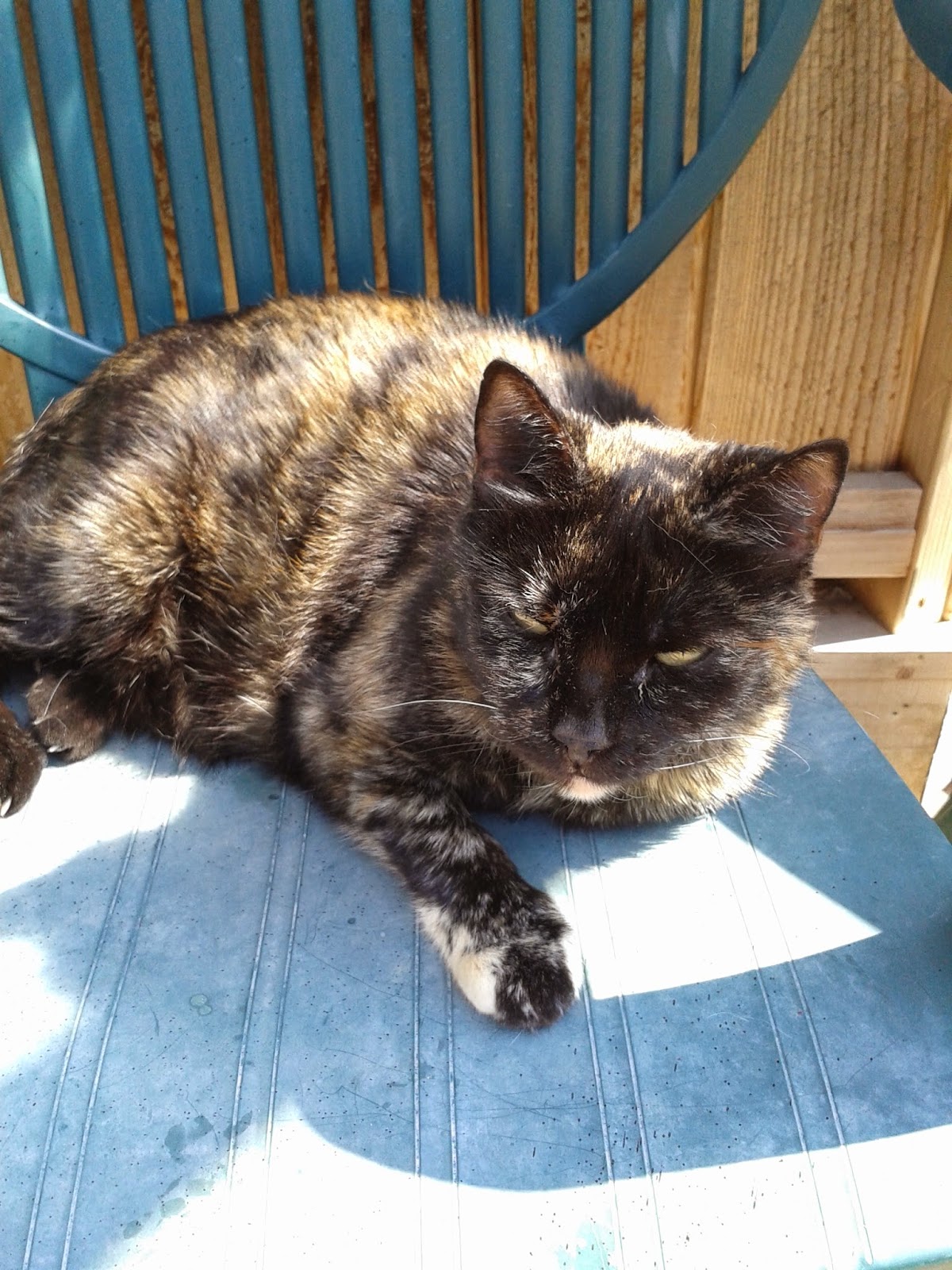 Treacle - DW
When we have a truly adoptable cat, we try to make sure it has its chance at the No 5 Road Shelter – the public face of our organization, and the place where all the adoptions occur. For these four, and for cats like them, the No 5 Rd Shelter can’t be an option – there’s nowhere for them to get away from other cats and they would be acutely unhappy. So they stay with us at the Sanctuary, where they can usually find their own sanctuary somewhere. Unfortunately, tension makes them develop some bad habits about where they poop and pee, which means that they’re often not a good adoption risk.  We love them anyway – and cleaning up after cats is just one of the joys of volunteering here! 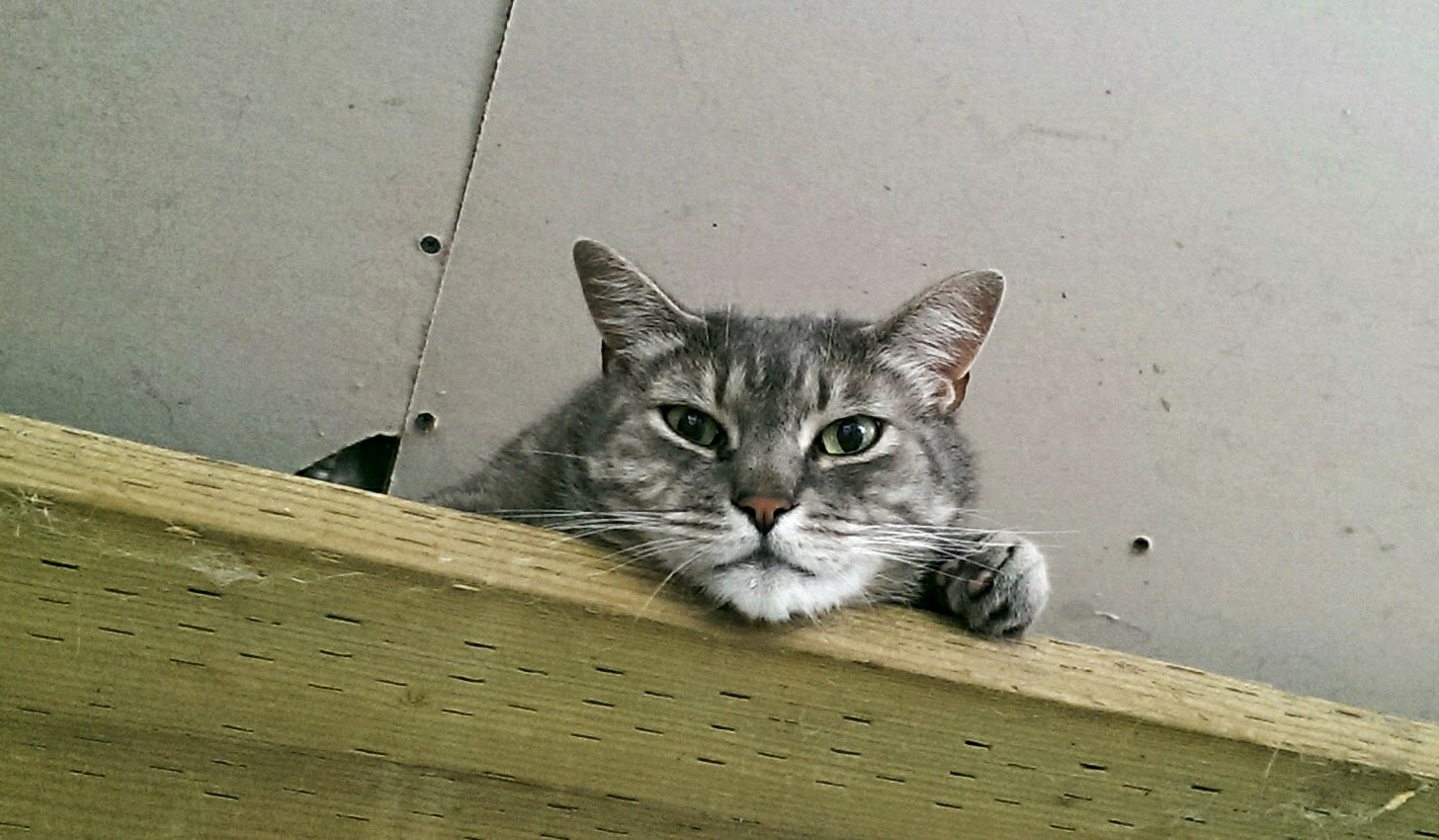 Due to his large size, beautiful green eyes and grey colouring Mad Max is a cat whose reputation is constantly preceding him.  Even though he is semi-feral he can be persuaded to tolerate some pets and human love when his friend Jett is around to make sure the humans won’t hiss or swat at him (the wheels of affection can also be greased with a discreet chicken bribery). 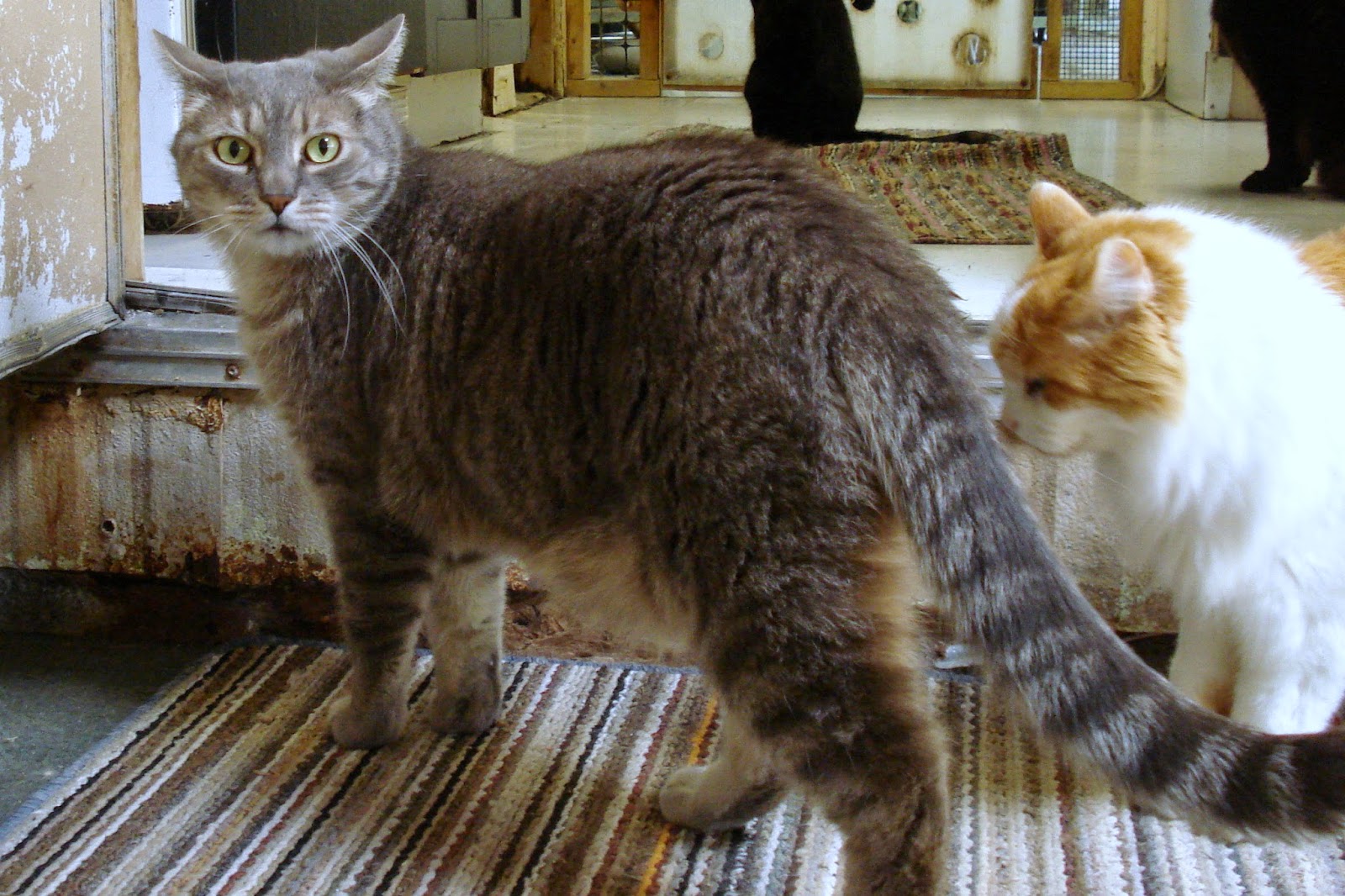 Max lives on top of the cages in the Double Wide, but during these hot summer days, you will most likely find him outside, on a mission to see his friends in the Cement Cat pen (I’m convince he has a girlfriend in there) or looking for a nice, quiet spot to sleep in the sunshine. 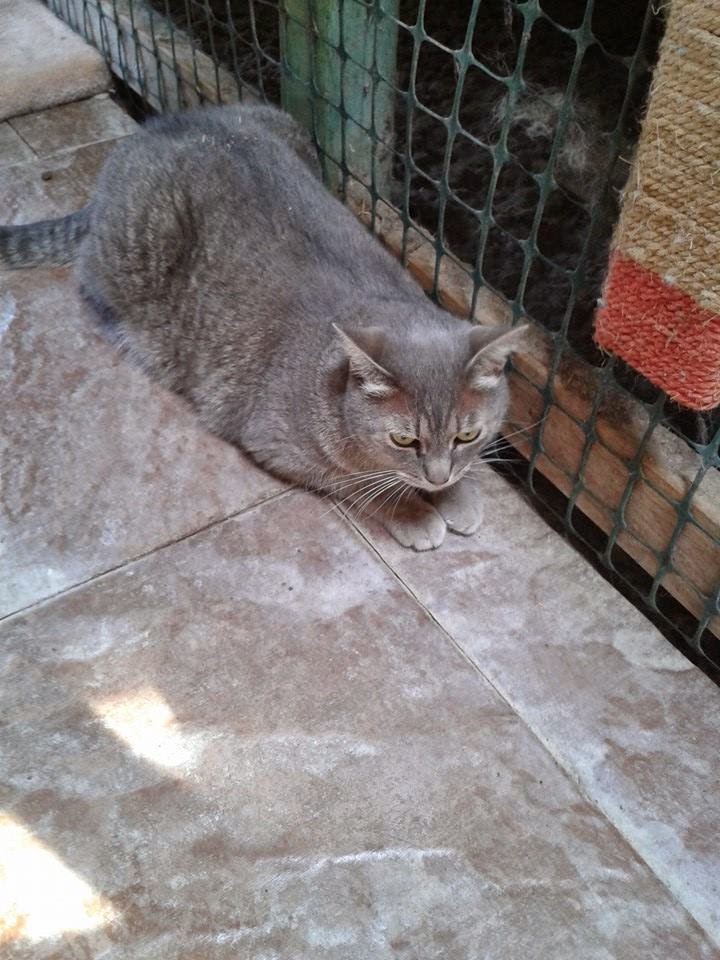 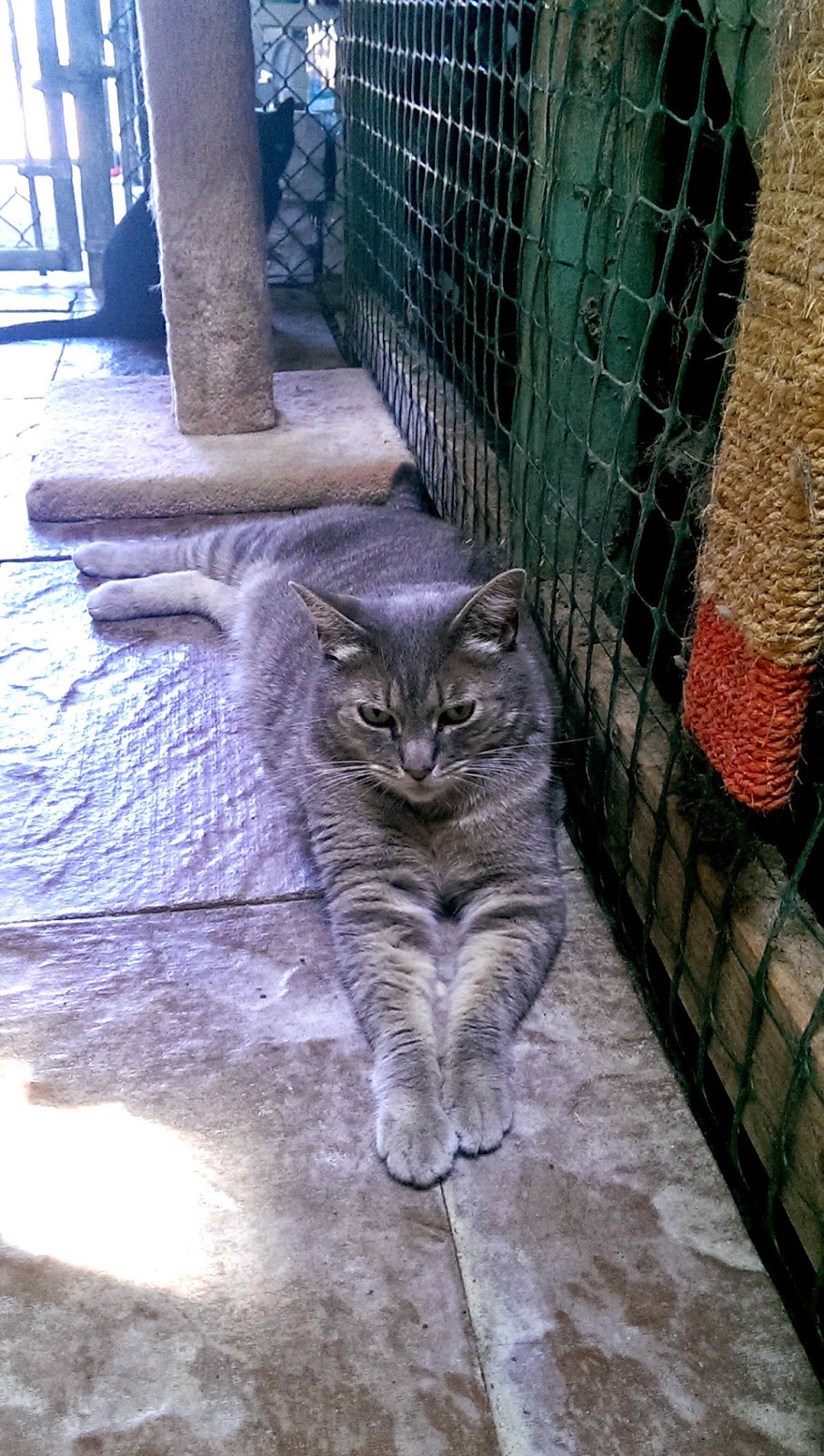 I first became friends with Max when I started working in the Double Wide on a regular basis.  While still too shy around me to supervise my cleaning closely, he would always watch me from a distance while I worked and would tilt his head and listen to me while I chatted with him.  When I asked Leslie and the other ladies about Max, I was told stories about a wild and rambunctious kitten who surprisingly grew and grew until he was at least double the size of his litter mates.  While still large in comparison to other cats, I find today’s Mad Max to be a quiet, mellow, gentle giant, who is shy of humans. 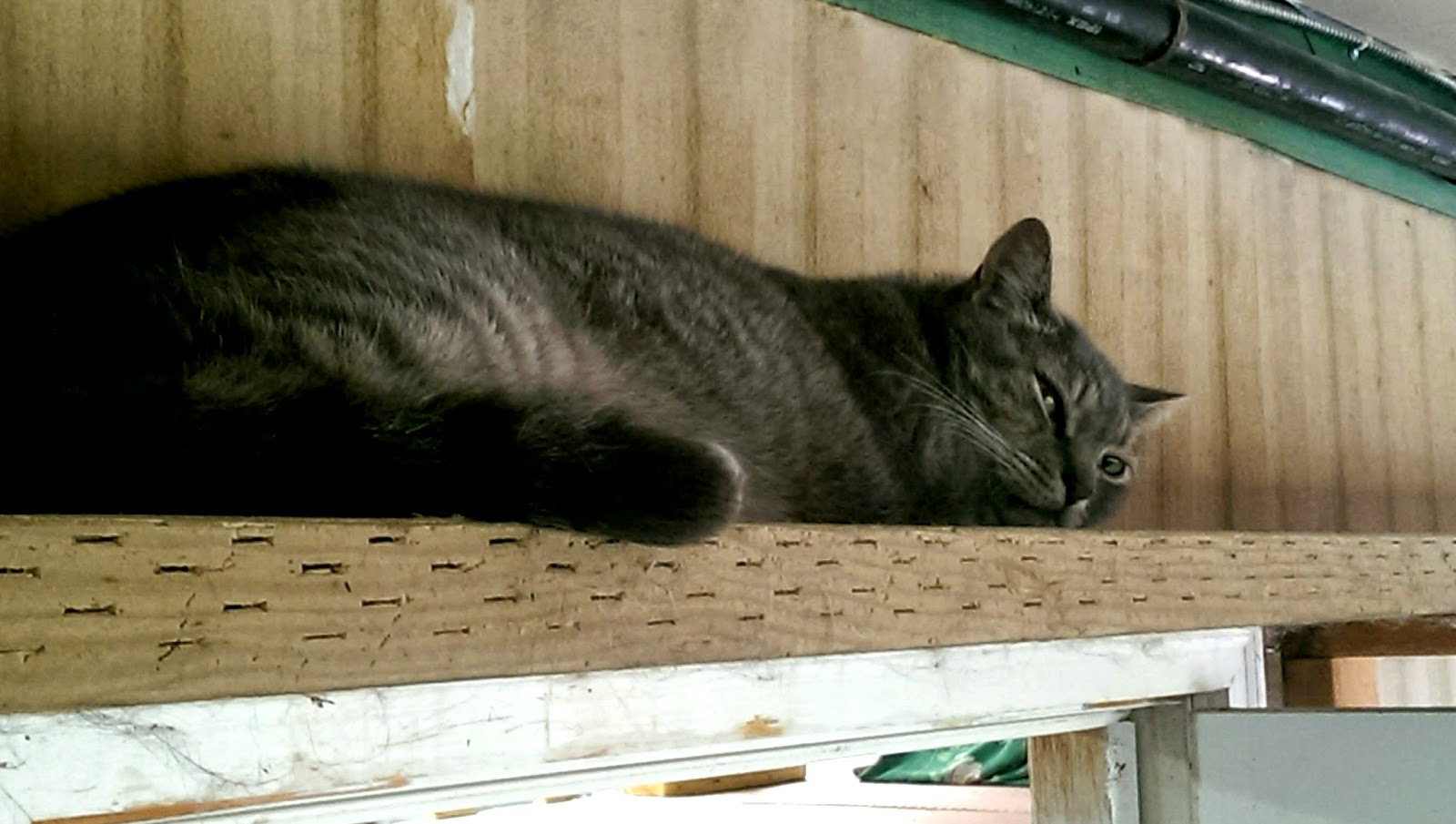 After hearing these stories, I decided that Mad Max would benefit from having another human friend and set to work.  It took a few weeks of persuading, but eventually, I noticed Max watching me while I cleaned in Waldies Hut in the back pens on Tuesdays. Then he began to lead me to a comfortable spot outside where I can pet him.  I was overjoyed a few weeks ago when during one of our petting sessions he began to purr very softly. 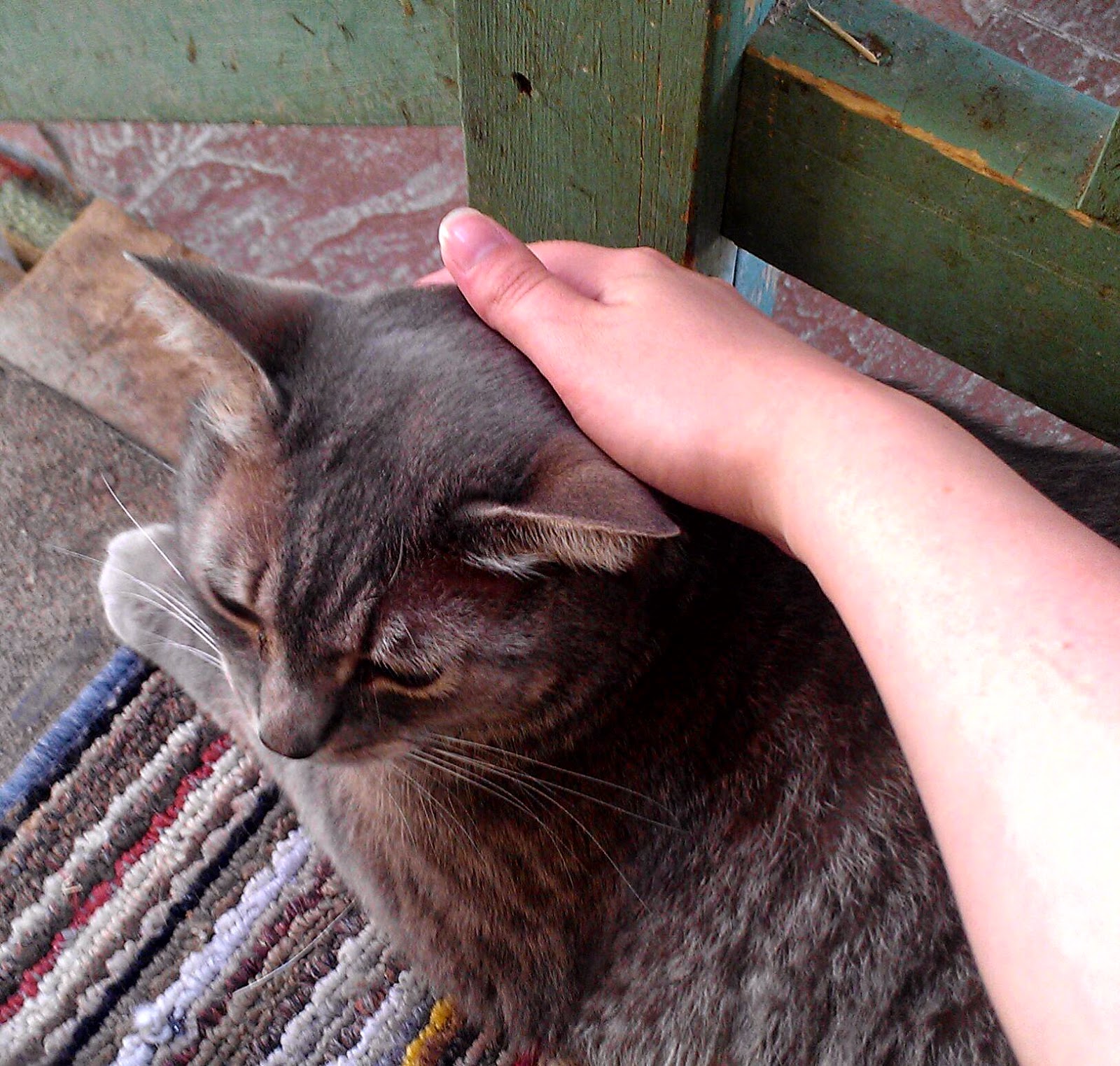 Although, gaining his trust took some time and patience, Max’s friendship, now that I’ve earned it, is so rewarding and a testament to the benefits of making friends with a semi-feral.

Once again the Cat Sanctuary is basking in the best of BC summer weather – and most of the cats have decided that activity is OUT. 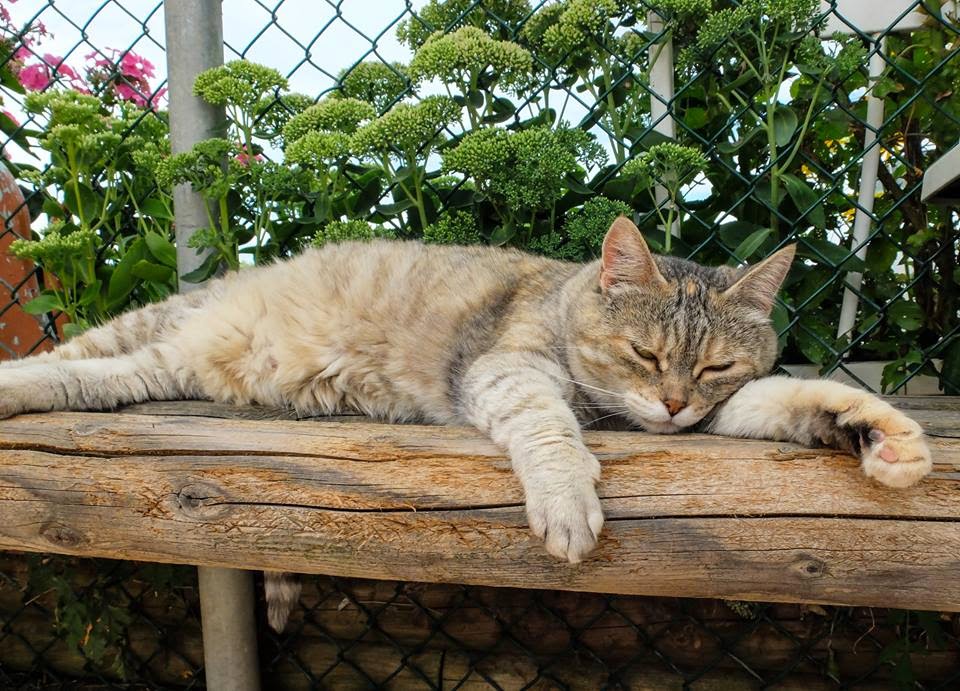 Latte
Wherever you go, little patches of shade each hold a cat. The front courtyard has been rigged out with an awning, the new trees (thank you to Purina and Evergreen) are giving green respite and the gazebo is popular. 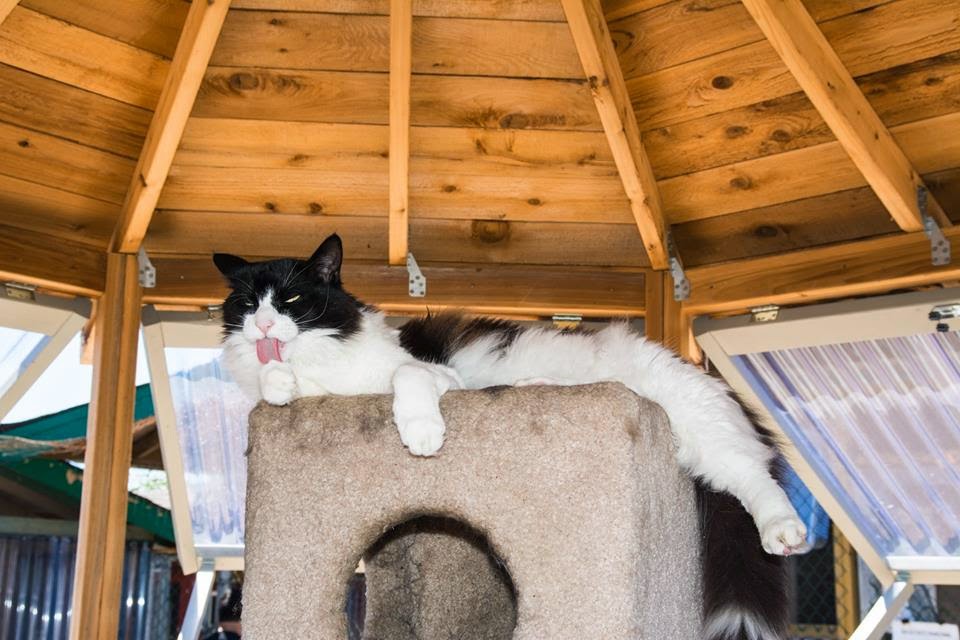 Puffin
In each building the fans are going, and cats have plastered themselves on shelves, so that often only the toes can be seen. 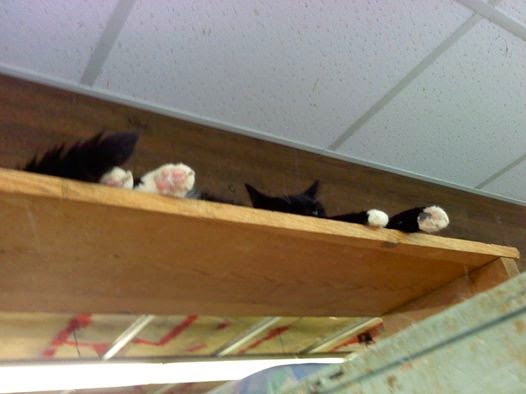 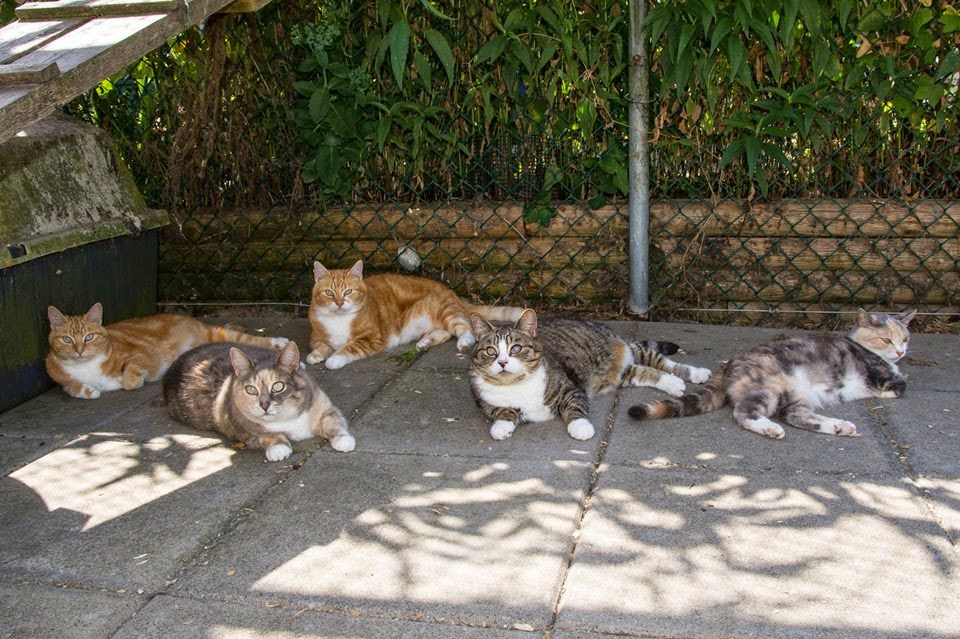 And everywhere there are sleeping furry bodies... 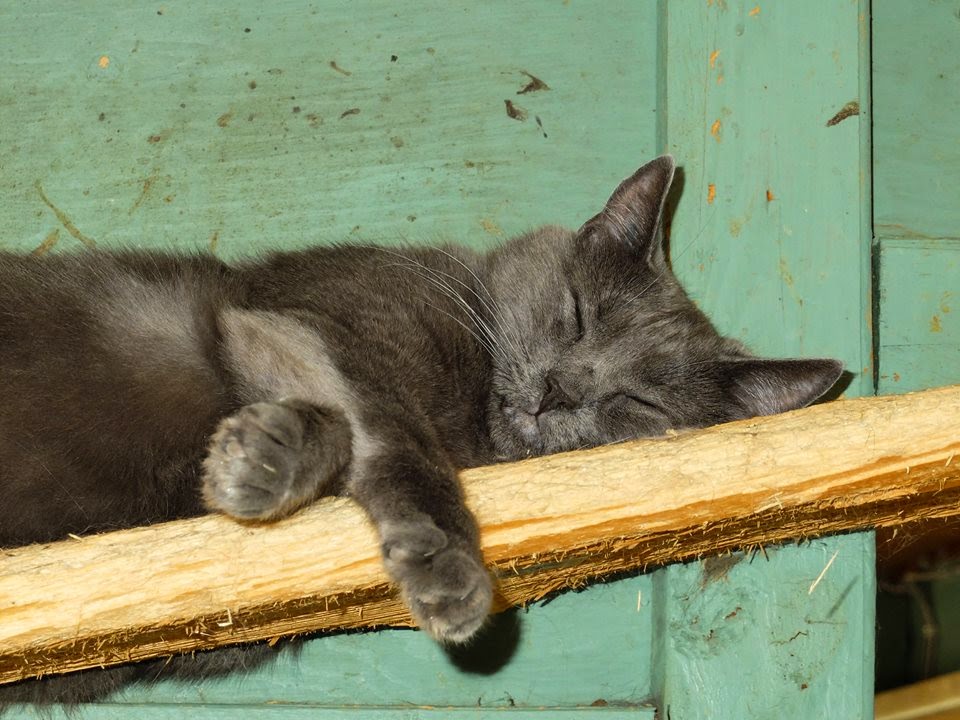 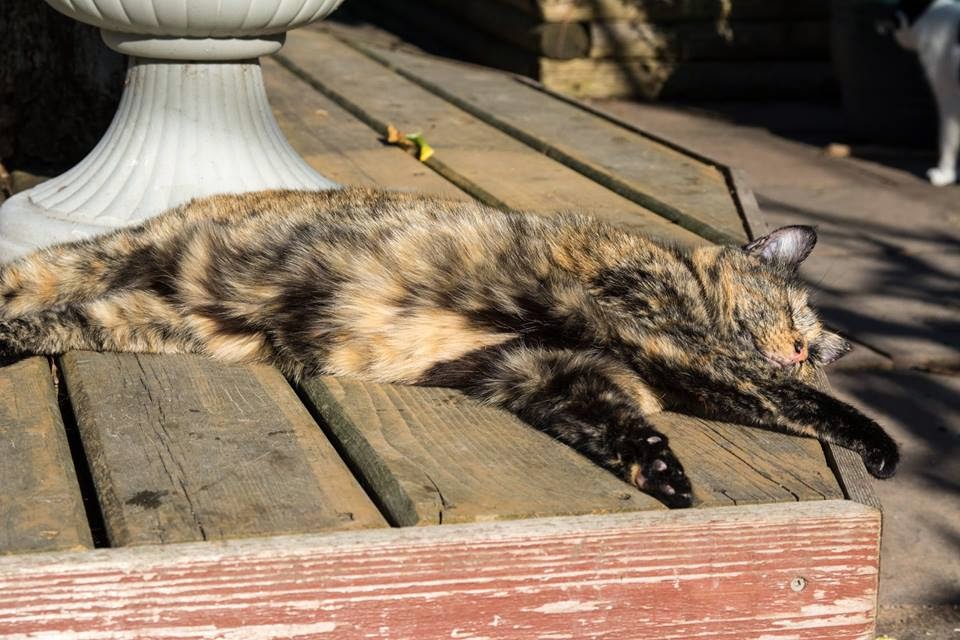 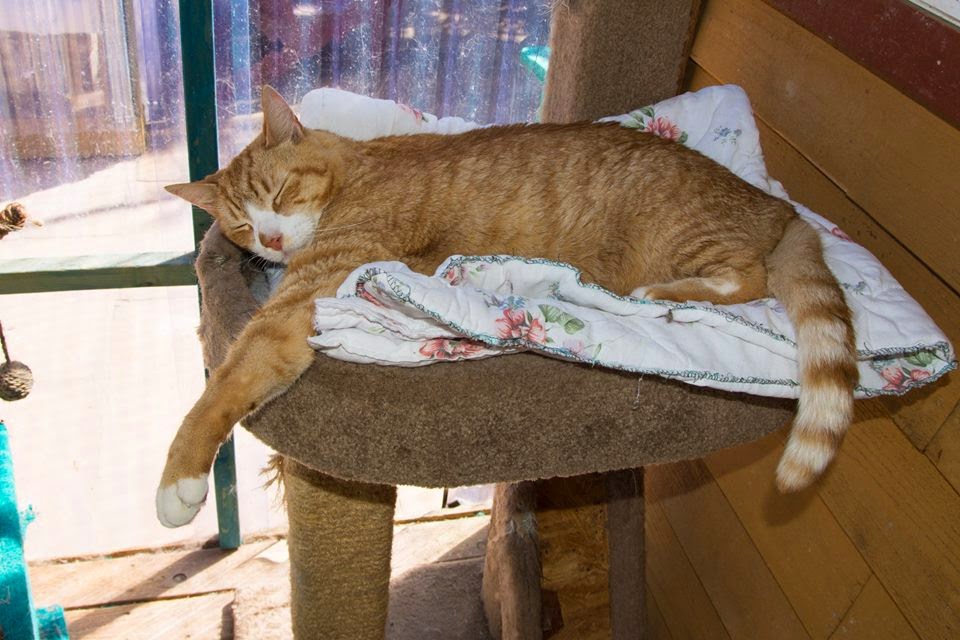 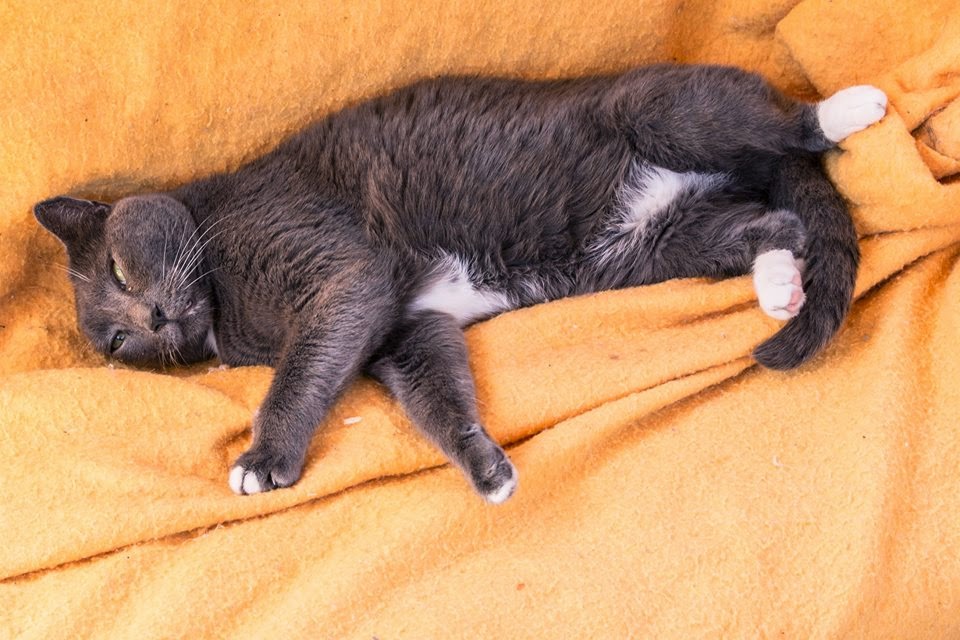 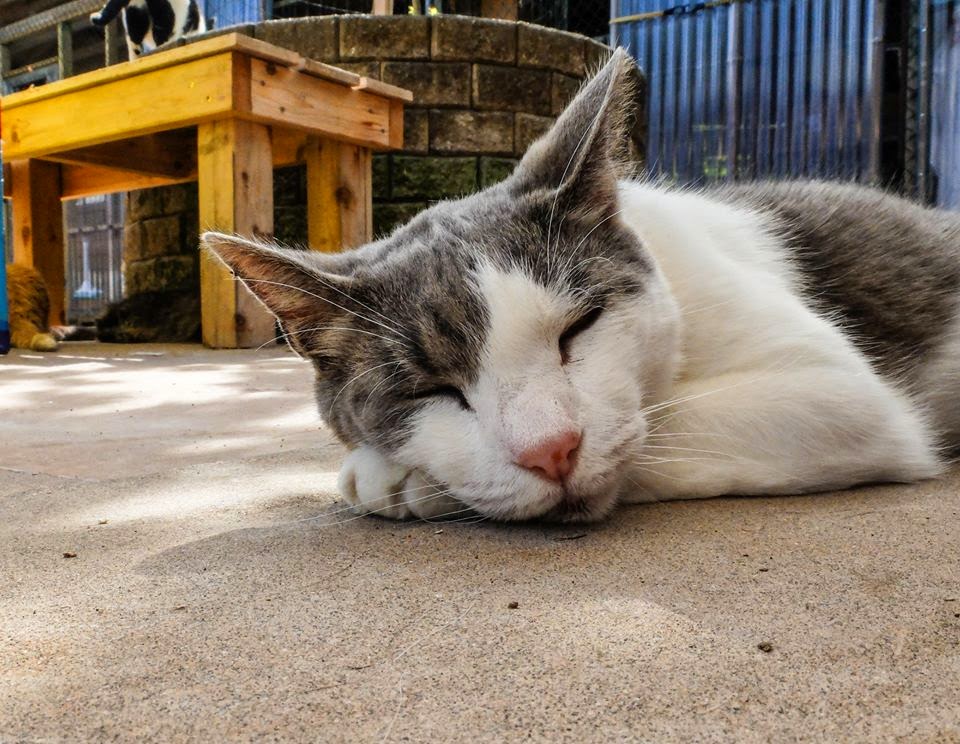 Thanks to Michele Wright and Moira Langley for the pictures
Posted by The Neko Files at 7:36 PM 1 comment: