Wally is a late summer arrival from VOKRA (Vancouver Orphan Kitten Rescue Association).  He is a large tuxedo guy at the ripe age of 10 years.  His glorious black coat has random hairs of white, resembling snowflakes and big white feet to match.  Wally’s face has the typical street cat look of tomcat jowls, slightly tattered ears, scraggly whiskers, and scowling eyes.  No wonder he was a tough nut to crack. 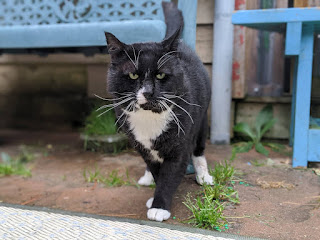 KN
As an FIV cat, he was not an easy prospect for adoption, which is why he has come to us;  you will find him in the Val Jones area, off the front courtyard.  Initially, he wasn’t keen on any offerings from visitors.  If anything, he’d give you the side eye in return.  For a brief 2 weeks, he had some ear trouble and had to wear an e-collar.  It sure didn’t elevate his mood.  He spent the days lounging at the top of cat trees.  The best surprise was yet to come. 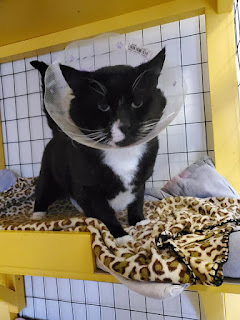 MD
When temperatures dropped, he pulled a 180 - warming up to people and spawning quite a fan club by the end of October.  His popularity soared especially amongst the human females.  He’s not shy around strangers, either. Even the Val Jones Corner cats befriended him.  In fact, the only soul who doesn’t enjoy Wally’s company is Magnus.  Magnus just doesn’t like any cats. 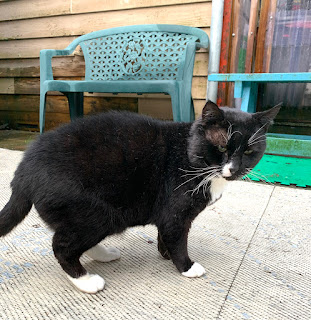 PC
Wally soon took up the role of greeter cat.  First one to the gate means first one to get goodies!  After a human enters the gate, Wally would “happen to walk by” and meow out a “hello” in his raspy, soprano voice.  Unlike Pax who often sits upright like a statue to be admired, Wally would approach the visitor and expect treats or physical affection.  He’s open to being pet almost all over (the belly is 50/50), enjoys nearly any food, some brushing, and being told what a cool cat he is.  For catnip, he’s a muncher and a roller.  You’ll see him eating it.  Turn away for a second, and there’ll be green stuff all over him.  Toys are not really his thing, but you can try.  These days, his expectations are high.  Lavish him with gifts or he’ll go into a corner and mope.  And no, you can’t make him wait his turn. 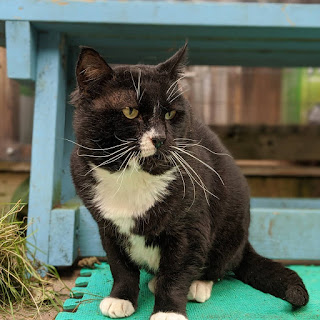 KN
With the chilly air came a new heat lamp on the porch of one of the huts. Wally quickly took to the warm gift and was joined by several others.  The disinterested cats stuck to the heat panels in the huts.  Seeing Wally cuddled up with Jim and Frank became a common sight.  I’ve even found Frank giving Wally a meow-sage.  What a lucky cat! 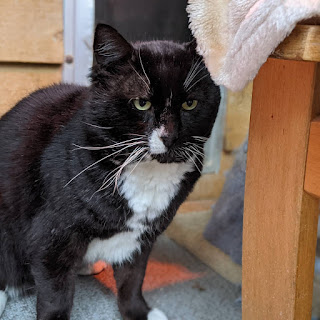 KN
To be admired by cats is something many humans at the Sanctuary strive for.  For cats, to be admired by humans is a goal only for some and even less achievable by most.  Wally managed to achieve both within 2 months of arrival.  That is a monumental feat for any cat.  Here’s hoping Wally becomes a longtime resident, as I’m sure there are many people who would love to meet this whiskered wonder.
Blog by Pauline Chin
Photos by Pauline Chin, Melanie Draper, Karen Nicholson

Posted by The Neko Files at 2:34 PM No comments:

Email ThisBlogThis!Share to TwitterShare to FacebookShare to Pinterest
Labels: Wally

Orange cats are favourites for many of us at the Sanctuary – and their personalities are as diverse as the cats themselves. They range from cats that are loving and attention-seeking to the ones who hide away and hope you won’t notice them. All orange cats are tabbies of one kind or another, though with some the tabby patterning may be hard to distinguish. They are predominantly male – one in five (perhaps slightly more) is female. The red colouring is on the X chromosome; females (XX) need both parents to carry the colouring pattern, males (XY) only need it from one parent. However, the same colouring patterns can create tortoiseshell and calico cats – and those cats are predominantly female.We’ve had a good example of this nearby. One of Richmond’s many recreational areas, the Bridgeport trail was built on a former CN rail corridor. The pathway has become well used by walkers, but also by coyotes, raccoons and an assortment of feral cats, who have found hiding places in adjacent properties. Retired RAPS volunteer Elizabeth must hang a feline “welcome” sign out, since she had brought us several cats she has trapped over the years, and trapper Stephanie knows the area well. It was Stephanie who brought us two orange boys back in 2018 – one long-hair and one short-hair, and likely brothers. She named them Rocket and Pocket – when they came to us Pocket was for some reason renamed Sprocket. In the course of the inevitable testing and neutering, it was found that Rocket was FIV+, and he was placed in the New Aids are;  Sprocket, after the obligatory cage-stay, was released in the back courtyard.Both boys had obviously never been handled – they were true ferals.  After an initial period of hiding from everything, Sprocket made friends with Double-Wide buddy Tiger, and when Tiger was adopted, with a number of other back courtyard cats; he learned from them that humans were not as scary as they looked. He is still a little wary, but much more confident; he will allow touch, though he’s not a lap-cat, and he loves to explore.
Rocket, on the other hand, buddied up with a bunch of FIV+ cats who were as feral as he was, and for some time, all we would see of him would be a disappearing tail. He knew every hiding place in the pen, and when he finally ventured into the cabin, it was to get as high up and out of the way as possible.  It has taken a lot of patient work on the part of Kitty-Comforters and volunteers, but he is now allowing himself to be found within reach, and to be petted and given treats. The boy who wouldn’t allow us to look at him is now rumbling like a motor when stroked, and starting to look for attention.
In the summer of 2019 a growing colony of cats was tracked down and trapped in the same area. All the youngest ones were tamed and adopted out; but a group of then-adolescents were too old for taming to be an easy prospect and were popped into Pen 6. The majority of the colony were black – the two males we think were the primary sires (Zeus and Pax) were black, but there were a number of tortie females – and there’s that genetic link for the red colouring.
One of shyest of the teens was an orange boy we called Mercury, and as he has grown, and become less terrified of us, it’s become obvious that he is related to Sprocket and Rocket, though he’s at least a year younger.  We’ve occasionally encountered Mercury and Sprocket staring at each other through the gate like mirror images.
Right now, the Pen 6 cats are still too wary to be released, but they are making steady progress, with play and food on offer. When they finally emerge, I will look forward to watching the two ginger boys meet in person!

Blog by Brigid Coult
Photos by Lisa Brill-Friesen & Karen Nicholson
Posted by The Neko Files at 9:53 AM No comments:

No, not the holiday chocolate variety… but they could be!

These 2 came in from Nanaimo last winter.  Both began as hissy ferals who emphasized the “fear” in feral. While they both call New Aids home, their personalities are polar opposites.Wily weirdo Domino (yes, another one) can make a scene these days, but started off hiding and hissing.  He didn’t want any contact and seemed disgusted by humans.  After release, he started to explore the place.  He has medium length white and black fur, with asymmetrical black markings. His pink nose has black “freckles”.  Little by little, he eventually got used to the presence of us weird, furless creatures. There was a house big enough for everyone, a constant source of food and water, and different humans who did the same routine everyday.  They cleaned his poop box, brought food, playthings, and treats!  Domino will approach anyone.  With his tail up, he hopes for affection or food.  Pass on the opportunity, then prepare for chaos.  While you’re petting another cat, he may wedge himself in-between, flick his tail like a feather duster, or swat them.  If that doesn’t work, he’ll try climbing on you.  There’s nothing quite like getting razor hooks in the knee with the attached cat using them for leverage.  Time for peroxide…Another trick is scare tactics.  If the majority of cats are gathered around for food, Domino will sneak behind the crowd and scream.  Of course, that sends everyone scattering.  I saw this happen 3 times in a single visit.  He didn’t even want the food – just the attention.  When he was temporarily caged in autumn, he made the same you-stepped-on-my-tail outbursts.  The other cats unfriended him by then.

Because of his wild behavior, he’s earned some nicknames: DomDom, Donkey, Dingdong.  I call him Dodo boy, as I feel he’s more like a bird than cat.  He zips in for something good and suddenly high-tails it.  He has a devious nature and knows how to entertain himself, just like members of the crow family.Domino, Puffin, and Tugboat have never met, yet they all know how to sit and stare for attention.  The greatest trick he’s learned is to be nice to humans to get goodies. He’ll be your friend, if you allow.
Petite Amaretto was definitely a spitfire while acclimating.  After release, she made herself scarce, but eventually allowed humans to interact with her.  She stands out because of her calico markings - black and orange spots on a white body.
When she’s in a good mood, Amaretto is like a housecat; she sleeps in high places and comes down for pets, toys, and treats.  She knows how to head bonk, leg rub, and use her claws to reel you in.  Her fur is smooth and soft.  But when she’s had her fill, she’ll give you a small swat.  Persist and she’ll demonstrate her gnawing skills on your hand.  She loves using her teeth and claws.
Amaretto’s currently the smallest FIV+ kitty.  The other cats give her space and don’t pester her.  Even Domino isn’t crazy enough to mess with her.  They probably remember her ferociousness and opt to keep their fur.
Back to the chocolates:  Amaretto can be sweet and smooth, a little nutty, but potent.  Domino would be a dominostein.  His outside shell beguiles his multi-flavoured personality – parts of which may take you by surprise, but that’s what makes him special.  These two probably won’t do well in an average home, so that makes them two more flavours in our box of random chocolates.

Posted by The Neko Files at 9:41 AM No comments: