It’s been a tradition to give the names of fictional detectives to cats that have found their own way to the Cat Sanctuary or been abandoned there.  That’s how Kojak, Cagney, and Magnum received their names and now we have another new arrival, Watson.  It’s elementary, my dears! 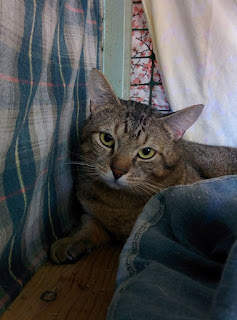 ML
Watson is a small tabby boy who appeared in the Cat Sanctuary parking lot one day in mid-February, coincidentally on the same day that our beloved Kojak succumbed to feline leukemia.  It’s comforting to think that Kojak’s spirit guided young Watson to us.  Fortunately, he was quite easily trapped and brought to safety inside.  However, he didn’t seem to appreciate his good fortune.  He was one unhappy cat at first and for quite some time afterward, snarling and hissing at anyone who entered his cage and tried to befriend him.  Animal Care Staff Leader Leslie suspected that inside that spitting little boy lurked a gentle soul and she was right!  Soon after his arrival, Watson began to show interest in whatever was going on outside his cage or in the one next door to him, although no way was he willing to welcome any friendly person-to-cat interactions.  Slowly, the aggressive attitude became a more passive one and he’d simply sit and watch warily when someone entered his cage.  The day came when he would accept, and apparently even enjoy, some head and chin rubs with a long-handled back-scratcher. 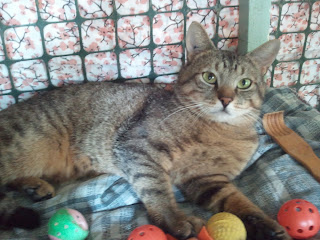 BC
Leslie discovered that he was more likely to tolerate visits and being touched if he didn’t have a cloth drape that he could hide behind.    It’s taken months of persistence by several determined staff and volunteers but a breakthrough has been made!  Provided that one approaches him slowly, for example letting him sniff a finger before gently touching his whiskers, he is happy to be petted and will even butt his head into a hand to encourage the contact.  Watching a previously frightened and defensive cat become trusting and lovable, as Watson has, is just about the best thing about volunteering at the Cat Sanctuary. It makes all the scratches received during the previous attempts worth the effort! 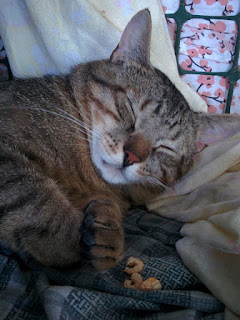 ML
However, I think there’s still a bit of detective work to do to completely understand Watson.  The other day when I visited him, I picked up one of the catnip mice lying nearby and waved it in front of him.  He definitely did not like that and gave me a swat to show exactly how he felt about it.  Perhaps in his earlier days, something being waved near his face had an unpleasant outcome for him? 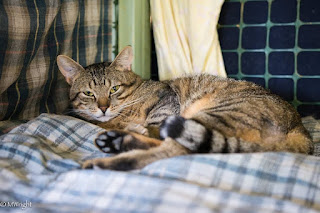 MW
Unlike his fictional namesake, we’ll probably never be able to sleuth out the mystery of how and why Watson came to live with us but we’re happy that he did.

Watson has gone to live with volunteer Karen Yu; good luck to you in your new home, Watson!
Posted by The Neko Files at 11:09 PM 1 comment:

These two sweet girls have made the back deck of the Double-wide their home.
Like Mya, Teagan and Kirstie, they are cats who have come from the nearby composting complex. We fear that someone may be dumping cats nearby, but there are certainly a few tough cats that seem to be able to survive the battle with machinery, predators and so on, and manage to reproduce. Stephanie and her team of helpers are working there pretty regularly; in the last little while they’ve brought in four kittens and two pregnant females – all now in fosterage.
Brighton was trapped almost a year ago, Hillie just a little later. Phaedra was in on Hillie’s trapping, and says: “The night we caught Hillie and her three kittens was a special one. We've never got so many cats at the same time from Harvest and we don't usually trap in the area we got them from. I had to walk over this field covered in white powdery stuff to where I wanted to put the trap. We got two kittens midway through the evening but something told me there was more to come so another trap was laid and set in the same spot. On our last round Hillie and another kitten were in the trap. I had an awful feeling we had missed one and worried all week until I was able to go again. We almost immediately got another kitten of the same age”. The three kittens were Hamish, Harlow and Havana – all three were eventually adopted, but Hamish and Harlow were returned to the 5 Road Shelter recently and are awaiting their forever home.
Brighton was pregnant and went into fosterage.  Phaedra said she had a really rough time delivering and ended up with a c-section that managed to save one kitten (Rocky), who was later adopted. She would almost certainly have died trying to deliver if Stephanie and Cheryl hadn't trapped her first.
Once their kittens were healthy and ready for adoption, the two feral mamas came to us at the Sanctuary. They were both in the Moore house originally with the three cow girls. They would both get themselves as out of reach as possible and were given the nickname The Two Gargoyles.

Phaedra says “I could pet both of them but Hillie was more receptive and Brighton just seemed angry. When they were transferred to the Double-wide they seemed to switch personalities:  Hillie was very upset and Brighton seemed much easier to handle. Hillie did NOT like the new environment, and was not at all averse to slashing out at Kitty Comforters. We found that she was calmer and easier to tend in a cage when she had her buddy Brighton with her, so, rather than releasing Brighton to join the other cats, we kept the two of them caged together. However, they had to be separated for a while when Brighton got a cold, and it was impossible to perform medical procedures on her with Hillie attacking the med staff.  But gradually Hillie came to accept (if not always happily) that humans were now a part of her life."
But there’s a limit to how long you can keep cats caged, and it was more than time to let the two brave the open areas. Once their cage was opened, they made their way to the back deck – something of a relief to all of us, because it was easier to monitor their progress. Neither has made any move to make a run for the outside area. There’s no urgency to have them move – the deck of the double-wide is favoured by the shyer cats, and many of them rarely venture outside, even in the best weather. Hillie has lots of places to hide, and we mostly keep shelves draped so that she can feel that security.
Brighton enjoys visitors, and likes to be up on one of the cat-trees with a good view of proceedings. She’s a general favourite of the Kitty Comforters. She is very approachable so long as you move slowly. She loves her tummy rubs and pets, and adores being to be brushed. She can even be picked up but doesn't really seem to enjoy it.
Hillie’s “thing” seems to be play. She can often be heard banging a ball around the deck. Phaedra puts ping pong balls out there for her, and she's starting to come inside looking for a ball or two. One day Phaedra opened a whole packet of them and chucked them for Hillie. What a treat!
Both of these girls will still head for high ground if there is too much noise or fast movement so we try to move gently around them. Phaedra says “I believe they will keep getting better about accepting us and becoming our friends - though not through food. With Brighton it will be love and cuddles. Hillie is starting to associate us with play and I believe that's her key to socialization.”
Blog by Brigid Coult & Phaedra Hardmon
Pictures by Phaedra Hardman and Michele Wright
Posted by The Neko Files at 8:48 PM 2 comments:

Recently Marianne wrote a blog about Morticia, who hangs out in Waldie’s Hut, in the back courtyard. Shortly after, Phaedra FaceBook-posted a picture of Morticia with one of Moxie – two cats she said she’d confused for some time (and now finally had them sorted).
Moxie was a new name to me – I needed to investigate!
I was pretty focused on finding grey Sylar, but as I hunted round the back courtyard, I kept encountering this handsome tuxedo, who, while not terribly friendly, at least accepted petting and treats.
Step no.1 – take a picture 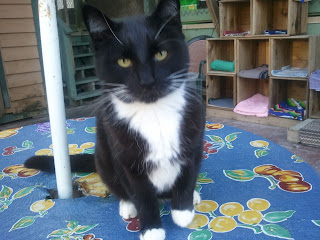 BC
Step no.2 – show it to Leslie, who remembers every cat that’s come in!
“Oh,” she said, “That’s Moxie – he’s the brother of Samantha and Willy!”
That was a surprise – the three of them are not alike in any way.  Samantha is a pretty little girl – the sort of cat that the camera loves. She had featured on one of our previous calendars, and I have several beautiful  pictures of her from Michele. 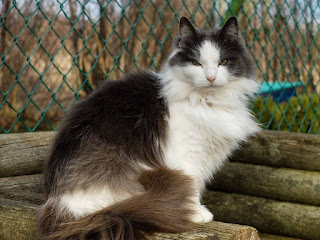 MW
She’s a bit wary, will occasionally allow herself to be touched, but prefers, on the whole, to be left alone. 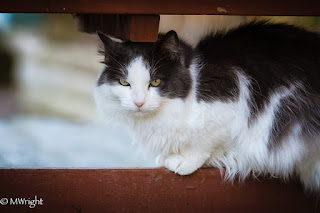 MW
Willy definitely prefers to be left alone. This shy boy hangs out in the Newcomers area and on its deck.  He is sometimes confused with grey Chester, but the latter tends to have the attitude that attack is the best defence (with other cats, at least), and with Willy, attack is the last thing on his mind. 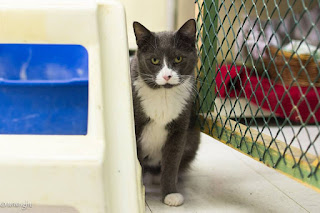 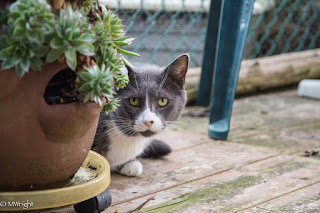 MW
Usually you’ll find Willy hiding behind or under something – which is why it was something of a surprise to find him lying out in the courtyard near his sister.
Moxie has the typical tuxedo good looks (top-hat, bow-tie and tails) and he’s obviously the favourite of at least one lady – you will often find him in full flirt mode with little tortie Vienna: full-body rubs, head-bonks, tails entwined. 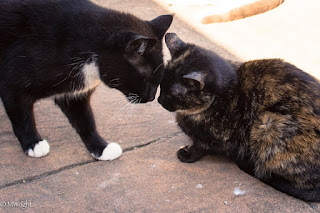 MW
The attraction is obviously mutual. 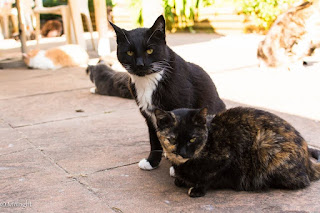 I often have great photographs come my way from the many people who work in the single-wide trailer – and many of those pictures are of our favourite Mom-&-Son pair: Diamond and Garfield.
There’s really not much to add to the notes from the blog entry last November, but there are lots of images to share.

Once you’ve got past the Dryer Gang at the doorway, Diamond and Garfield are often the first cats you’ll meet; their usual territory is the bed under the medicine cabinet.  Unlike the Dryer Gang, they are not anxious for your attention – the usual D&G day goes: wake-up, litter-box, snack, snooze, snack some more, doze, cuddle, snack again, snooze….  You get the picture…

Garfield especially likes to be around to help at meal-times – on the principle that quality control is always appreciated.
They both have that cat fascination for small boxes...

﻿
When they first came to us, we felt that their need for each other was probably at least in part a stress reaction, but after almost a year in the Single-Wide, it’s apparent that it’s a very real attachment.
With all the space in the building, it’s funny how often you’ll find these two sharing a small bed… 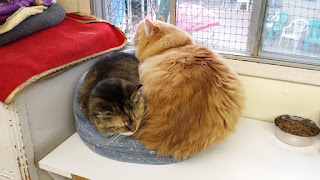 Or piled on top of each other... 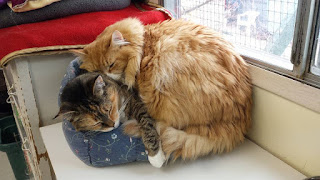 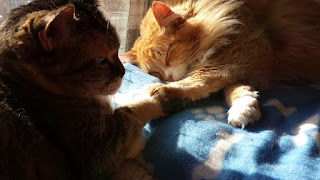 DW
We would love to find a home for these two beautiful big cats, but it would need to be somewhere committed to keeping them together.
In the meantime, they are greatly loved by all who visit, and Diamond takes the title for Best-Known Mom at the Sanctuary. 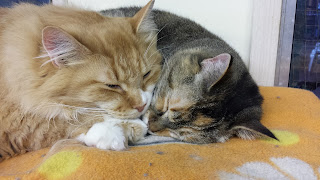