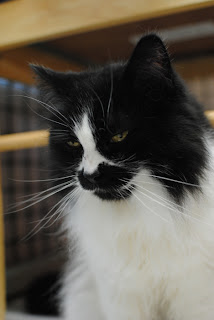 Deedee came to the RAPS cat sanctuary in 2007. Her owner had adopted her from another shelter and was sad to give her up, but Deedee had started peeing where she shouldn't and it was too much for her owner.

It turned out that Deedee had a terrible urinary infection, which had been the cause of the peeing. RAPS staff were able to get the infection cleared up, but Deedee remained cranky and prone to mood swings. Carol commented that she was acting like a cat in heat, and a trip to the vet revealed that she indeed had never been spayed.

Spaying helped with the mood swings, but Deedee remained a bit of a cranky girl. She's not a fan of other cats, with the exception of Charmin, with whom she shared a cage for some time. I don't get the sense that they were necessarily lovey BFFs, but Leslie says they "respected and tolerated each other." And one of Phaedra's comments on my Charmin post back in 2010 was that even when the cage door was opened and both cats could leave anytime they felt like it, they rarely did. 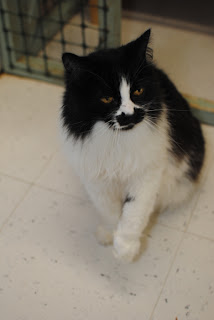 Deedee was pretty cranky with people to begin with, but she gradually got better over time. (Staff discovered that she loved tuna, which had to help with the process.) 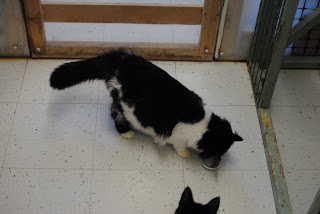 Deedee can still be a bit cranky, but only if you don't pay proper attention to her - if she's sitting on a shelf in the doublewide and you walk by without stopping to pet her, she might reach out and give you a little smack to remind you. 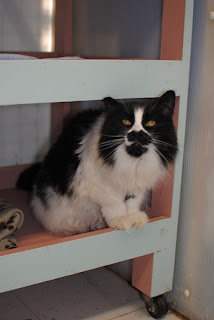 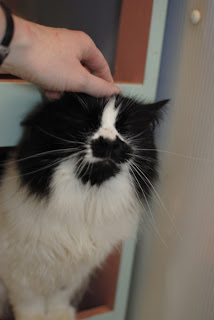 We all know that cats can be funny, as Claire has shown us in the past. (A hint for more graceless kitties!) Anyone who knows me knows that I find cats "punny." With the help of my friend Jenny, here is sampling of cat puns.

You didn't think I would give you the answers, did you? Let the guessing commence! 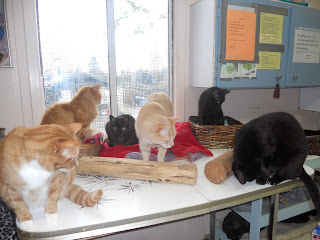 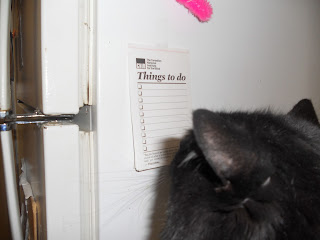 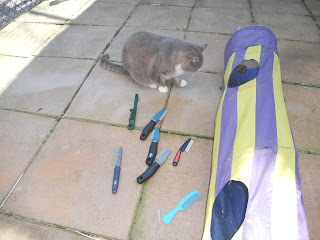 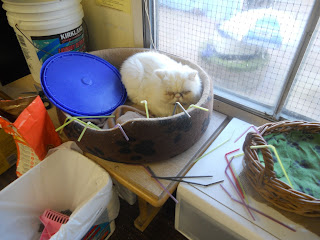 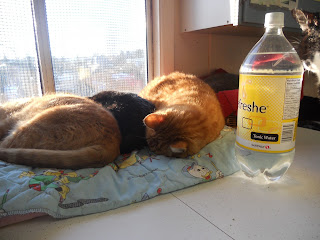 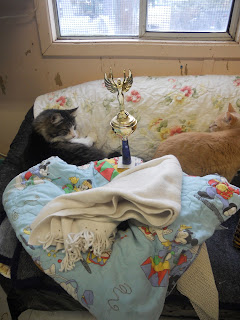 Last time I wrote about Grizzy, it was the early days of our friendship and I was still a bit dubious about having a friend who expresses himself by peeing on one's leg. These days, he's known for peeing on just about anybody who comes within range.

Oddly (ha!), he still doesn't seem to have a lot of (any?) friends, either human or feline. But it's actually because of this that I resolved to make sure he knows that in me, he's got at least one good friend. Yes, while some cats capture a heart because they're cute or sweet-natured, some "problem" cats do it seemingly just by virtue of needing it so badly.

Lucky for me, Grizzy has proved very open to the idea of being befriended. He's been letting me pick him up for a little while now, and recently has started purring and actually enjoying a cuddle. For those who remember interactions of a much more terrifying sort when he first came to the sanctuary, I provide photographic evidence of his softer side. Thanks to Leslie for the camerawork. 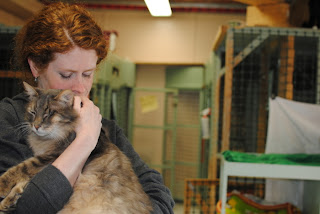 He's still getting the hang of the idea that asking to be set down after he's done cuddling doesn't need to involve growling, but even there we're making progress.

The big win this week happened when he was snoozing on a shelf and I gave him a little stroke as I went by. This startled him awake, which I felt bad about, but as soon as his eye focused on me and recognized me, he started to purr. I think it's safe to say that he does indeed know he has at least one good friend. 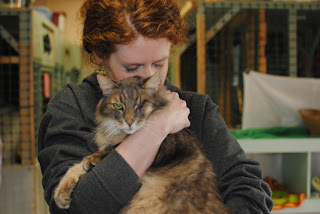 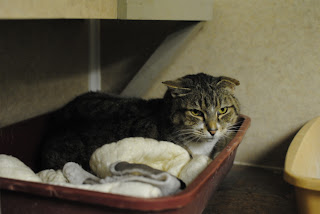 Zack came to the RAPS cat sanctuary as a kitten in 2005. He remains a rather shy boy, but he's a nice one.
I met him recently when he was caged for balance problems (a recurring inner ear issue, I believe?) and a cold. At first, I wasn't sure if he was going to let me get close to him. He didn't seem entirely sure himself, so I approached slowly and quietly. 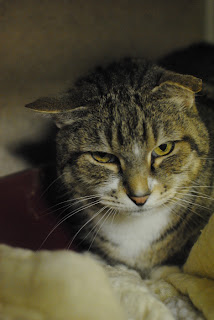 That seemed to be all he needed to feel comfortable enough with me to accept a pet or two. From there, it didn't take long before he was leaning into enjoy some proper head rubs. A nice boy indeed. 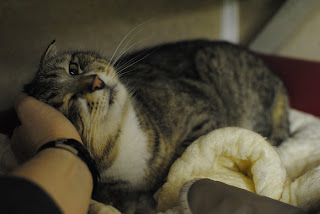 Posted by Claire at 8:38 PM No comments:

Anyone who's visited the doublewide at the cat sanctuary will have come across Deety -- he can always be found on his shelf in the laundry room. 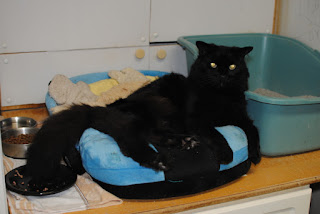 Once in a very rare while Deety will come down to the floor (lured down by a laser pointer, perhaps), but he soon becomes agitated and needs to be helped back up to his shelf. 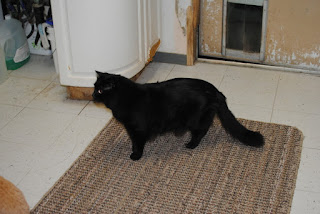 He doesn't like to be picked up, so the help involves moving this set up steps over to his shelf so he can climb up on his own. This he's quite happy to do, and he knows the routine so well that he doesn't even wait for the steps to be set down on the floor properly before he's scooting up them to the safety of his tiny kingdom. 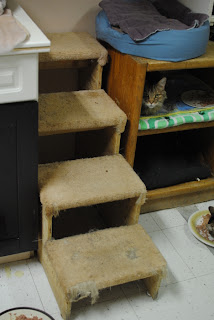 More than a few of us who've witnessed Deety's regular refusal to move from his place (and his seeming inability to jump back up to it on his own in the event he does come down) have wondered how it is that his muscles don't atrophy to the point that he couldn't leave his perch if he wanted to.

It turns out that med staff member Catherine regularly takes Deety for some exercise. She brings him all the way to the end of the path by the sanctuary's back fence, has him come back to the doublewide on his own steam, then repeats the process. She stays close by him throughout the walk to make sure other cats don't bother him. Carol tells me Deety was declawed on all four paws at a young age, so it's no wonder he's not so comfortable around other cats. Fortunately, he's got RAPS staff to keep him safe... and to make sure he gets at least a little exercise to keep him healthy.
Posted by Claire at 7:48 AM 1 comment:

Email ThisBlogThis!Share to TwitterShare to FacebookShare to Pinterest
Labels: Deety

Deciding which cat to feature in a blog post can be a challenging job sometimes but luckily, I found Lucky (sorry, couldn’t resist), a beautiful long haired orange tabby that reminds me of a small lion with a gorgeous mane. 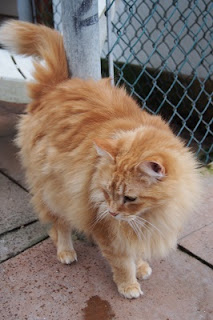 Lucky came To RAPS with his brother Tippy many years ago as feral kitten but unlike Tippy, Lucky has yet to trust us two-legged creatures.  So not being able to entice him for a scratchy-scratch, I watched him from a distance as he wandered around the compound one sunny afternoon.  Lucky, it seemed was seeking some affection from someone or something as he head butted a few table legs, rubbed up against many of the other cats and generally danced around me at a safe but curious distance.  Unlucky for Lucky, many of the cats he chose to rub against would then turn around and bat at him as if to say: “get lost red!” 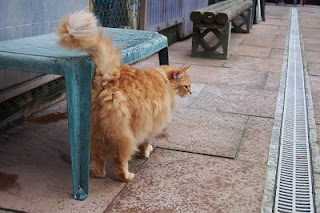 Seeing as I have a thing for orange tabby cats, I couldn’t resist trying to get near him and get in a pet or two.  I was hoping he would eventually get enough courage to finally come over to me but I’m told that Lucky is quite wary of people and doesn’t let anyone touch him.  I did actually manage to make contact with him after a lot of persistence but it was clearly not appreciated as he scooted off in disgust having had enough of me.
Posted by Martha at 2:25 PM 1 comment: 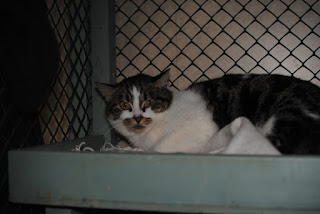 Selena is the mom of Silver, Silvia, and Sally Silver. Silver and Silvia came to the sanctuary last fall, and RAPS staff were recently able to trap their mom and sister.

As you may have guessed from Selena's expression in the photo, she's feral. Being an adult makes her less likely to tame up than her kittens, so she'll being moving from the Connor building where she is now to the back pens where she can have as much interaction with other shy cats as she likes and won't be forced into closer proximity to humans than she's comfortable. Of course we'll be there for her, ready to make friends when and if she decides she's ready to give us a chance.
Posted by Claire at 5:30 AM No comments:

Yes, over 500 from the RAPS sanctuary have now been featured in the Neko Files blog!


Having reached this milestone, and with it a fairly extensive database of cat stories and photos, the Neko Files will be relaxing the documentary pace a bit and bringing you two posts per week (Monday and Friday) rather than three.
Posted by Claire at 6:30 AM 4 comments: 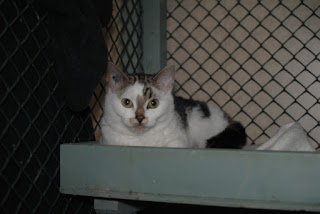 Sally Silver arrived at the sanctuary with her mom, Selena, at the end of February. Sally Silver is the sister of Silver and Silvia, who were trapped last fall near SilverCity and have since been adopted.

Raised by her feral mom, Sally Silver is not comfortable around people just yet, but Leslie has hopes that staff will be able to tame her as they were her siblings. Leslie told me an anecdote about taking a picture of Sally Silver with her phone, where she found the shy young cat crouched "hiding" in her litter box before she pressed the shutter and then sitting up and peering at her with interest directly afterward. 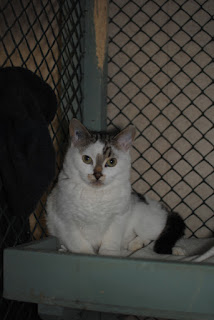 Here's hoping that staff and volunteers make as much progress with the taming of Sally Silver as they did with her siblings, so that this little cutie can find a nice home.
Posted by Claire at 9:13 PM No comments:

Yale can be such a cheerfully goofy cat that it would be tough to pass him without at least stopping to say hi. 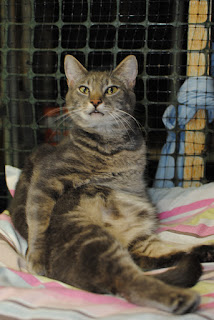 He's a friendly boy, so saying hi of course leads to patting... 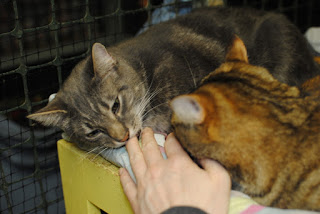 Apparently, like my Leo, Yale likes to chew on fingertips when he's happy. He tries not to bite too hard and it's all done with great affection, but still, it's not a way that every cat chooses to express himself! 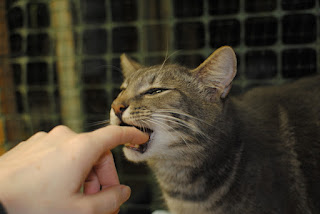