It's been brought to my attention that we're long overdue for a "graceless kitties" post. The cats must have heard about this too, as they've generally been refusing to be silly for my camera.

Here are a few shots I did manage to get with, as always, a little help from some friends. 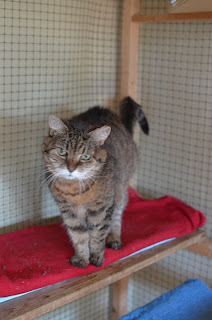 Olivia came to the RAPS cat sanctuary via the No. 5 Rd. shelter two and a half years ago. As a senior cat, Olivia's chances of adoption weren't great: Many people, unfortunately, don't want to take on an older pet. It's too bad, because Olivia is an absolute sweetheart. 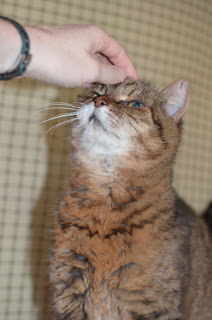 Olivia loves to be visited and responds to any attention with great pleasure. Leslie says she used to be more outgoing, but has become less so over time. She still loves company and cuddles as much as ever, but has become less likely to seek them out on her own. Olivia is missing her pats: Let's all make an effort to visit her in the kitten/gericatrics trailer and spend some time with her. 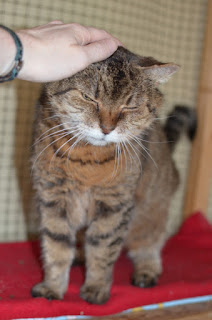 For a different way of sharing the always entertaining cats living at the sanctuary, I decided to shoot some video. As a number of my RAPS friends know, making music is another thing I like to do...
And so it seemed to me a great idea to create not just a video with the cats, but a music video with the cats.

I recorded a cover of Ingrid Michaelson's The Way I Am, chosen because the cats take us just we are, just as we do for them.
Some of you have seen this already. For those who haven't -- enjoy!


Here are some of the cats featured in the video:


Note: There will only be one blog post this week -- the video was lots of fun to do, but really took it out of me!

I was a little nervous about meeting Buster after reading the sign on the door to his private, no-other-cats-allowed room at the sanctuary: "very upset, aggressive 10-year-old male." Many cats are upset to find themselves suddenly in a shelter, but it seems that Buster had the aggression before that -- it was the reason he was surrendered. 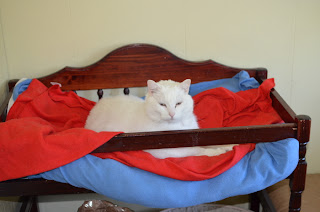 Fortunately, another note has been added to the sign on Buster's door, saying that he can be nice and does enjoy a few pats.... provided they're just around his head and not done for too long.

He did indeed enjoy a few pats from me and purred when I held out my hand for him to rub his face against. I wasn't sure what he'd think of my big camera, so to be safe I held it out for him to inspect before trying to take his photo. He responded by rubbing his face against the lens while continuing to purr. 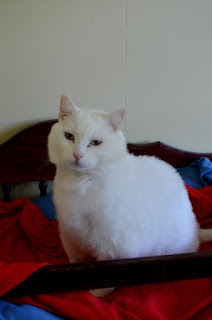 Apparently he doesn't much like the smell of other cats on his visitors. I was a bit nervous, then, when he hopped down from his bed, and started sniffing my ankles and feet with great intensity. Luckily, he wasn't overly offended by whoever he smelled there, and so I was spared the angry growling. 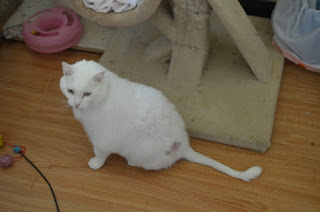 Posted by Claire at 6:29 PM No comments: 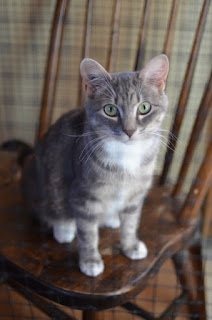 Careen came to the RAPS cat sanctuary in April after being trapped at the Lafarge cement plant in Richmond. She was thought to be between eight months to a year old at the time. Carol named her Careen after a fellow animal rescue advocate in Washington State. 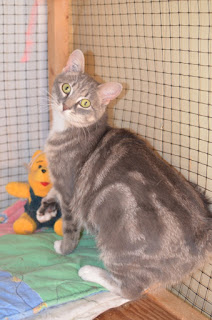 Careen is a friendly, lively youngster. She's comfortable enough with people that she was quite happy to greet and interact with me and my big camera seconds after seeing me for the first time. She has great adoption potential and will likely be moved to the No. 5 Rd. shelter soon so that more people will have a chance to meet and fall in love with her. 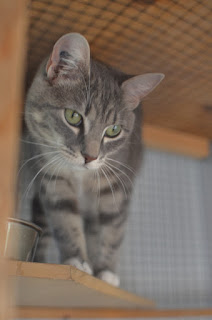 Posted by Claire at 9:09 PM No comments: 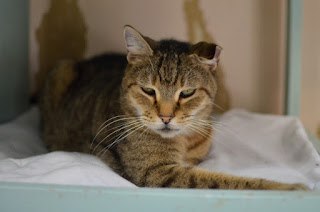 Dale came to the sanctuary as a feral kitten with his brother Chip. The two tabbies were named after the Disney duo Chip 'n' Dale by Leslie, who had young kids at the time.

While Chip successfully campaigned to move into the front courtyard area at the sanctuary, Dale has been content to remain in the back where he can enjoy lounging outside the tea room or cuddling up on a shelf in the doublewide. He's a friendly boy, and you can tell him apart from the other tabbies vying for your attention by his crumpled left ear. 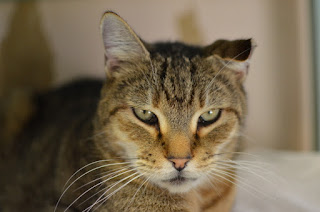 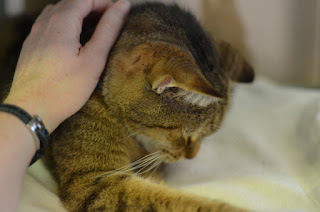 Posted by Claire at 7:48 AM No comments: 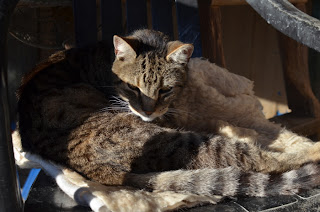 Chip and his brother Dale arrived at the sanctuary as feral kittens some years ago, around the same time we got Bobby. They all started off in one of the back pens and the brothers got along fine, but it seems that Chip became fascinated with the out of bounds (to him) front courtyard and campaigned to be allowed through the gate into that part of the sanctuary. He eventually got his wish and now can often be found lounging at the top of the steps to the singlewide.

Chip is friendly and comfortable with people. He does take his grooming very seriously, though, so it can be a little difficult to get and hold his attention if you come across him, as I did, while he's in the middle of it. 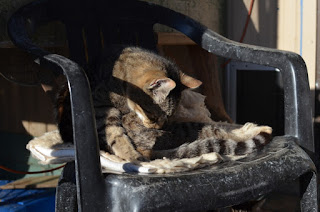 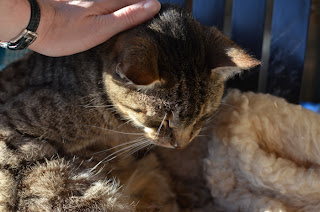 Posted by Claire at 8:53 PM No comments: