I'm puttin' on my top hat
Tyin' up my white tie
Brushin' off my tails
I'm dudin' up my shirt front
Puttin' in the shirt studs
Polishin' my nails
I'm steppin' out, my dear to breathe
An atmosphere that simply reeks with class
And I trust that you'll excuse my dust
When I step on the gas
for I'll be there
Puttin' down my top hat
Mussin' up my white tie
Dancin' in my tails
But no – Fred Astaire is way too energetic for these very cool cats!

To mark Valentines this year I decided to look at some of the cats that have obviously developed deep attachments to each other. For a few of them, they’re family relationships – mother and son or siblings – for others there is obviously The One Important Cat – and then there are a few who just send out the pheromones that say “I’m lovable!”, and the other cats gather around. 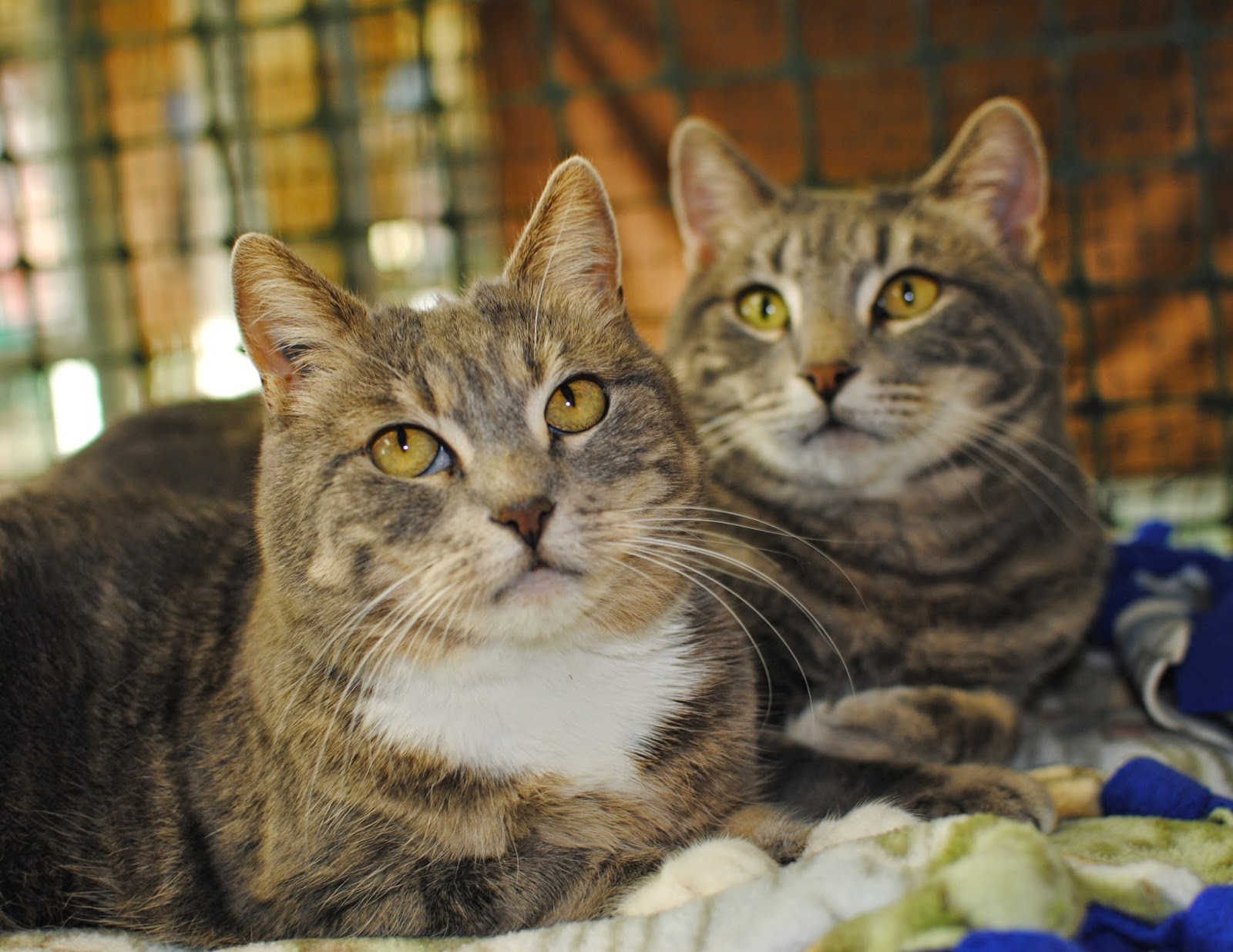 Bantam & Simone - CF
Any visitor to the single-wide will be greeted by the cuddle-puddle on the dryer – led by two grey cats who came from the same source, and are probably siblings. They are happy for a little interaction with humans, but they really love to be with each other. 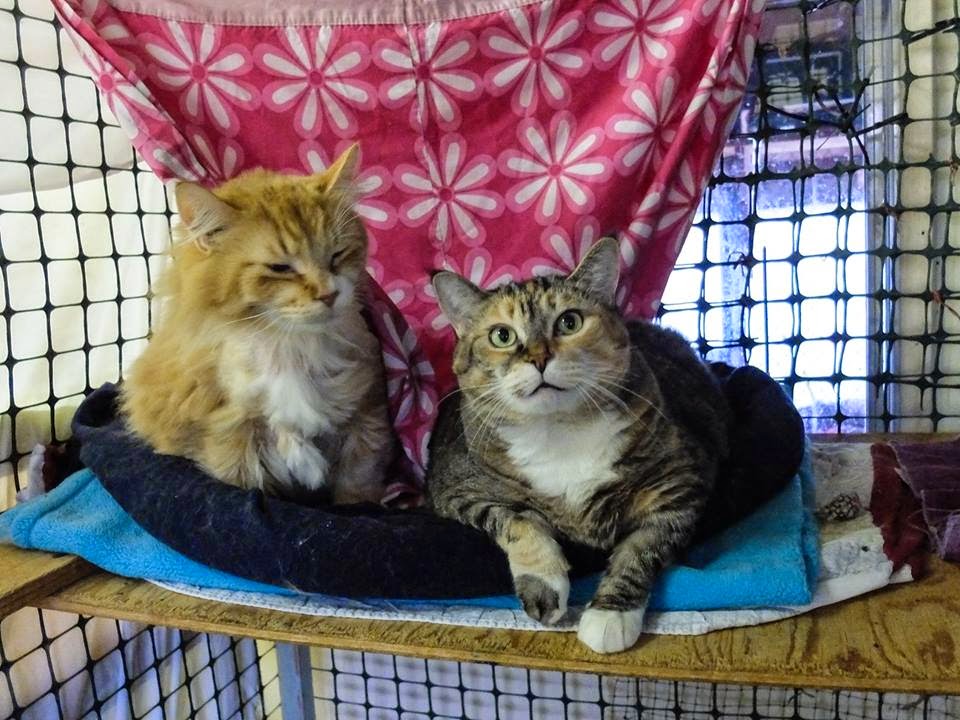 Garfield and Diamond- MW
Blog-readers may remember Hiro and Sophie, who are often found together – Hiro is a mama’s boy, but has recently started to be a bit more independent. We have just welcomed to the Sanctuary Garfield and Diamond, who are similarly attached. They are in fact adoptable, but being at the Shelter was too scary for them in the small cages there; with us they have room to move as they please – but mostly to snuggle. 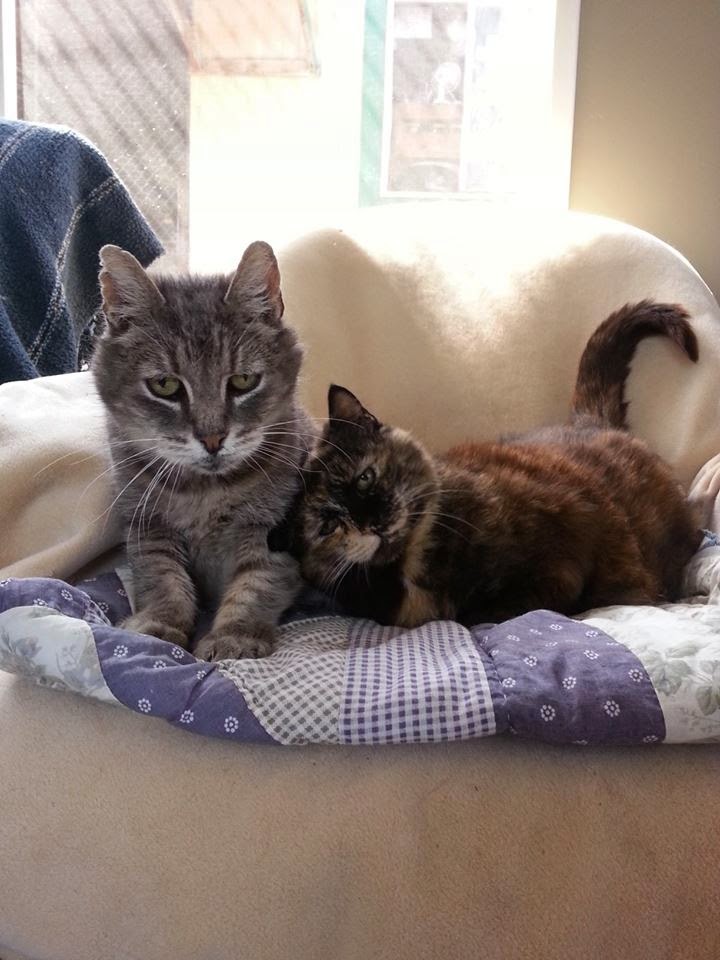 Liam and Lady Lightfoot in the New Aids are often found together, but Phaedra tells me it’s rather a one-sided affair – Lady has something of a crush on Liam, which isn’t entirely reciprocated. Phaedra says, “When Lady snuggles up to Liam he will slowly move to another spot; usually she doesn’t take the hint, and follows him. Liam usually relents because he's a peaceful little guy.” 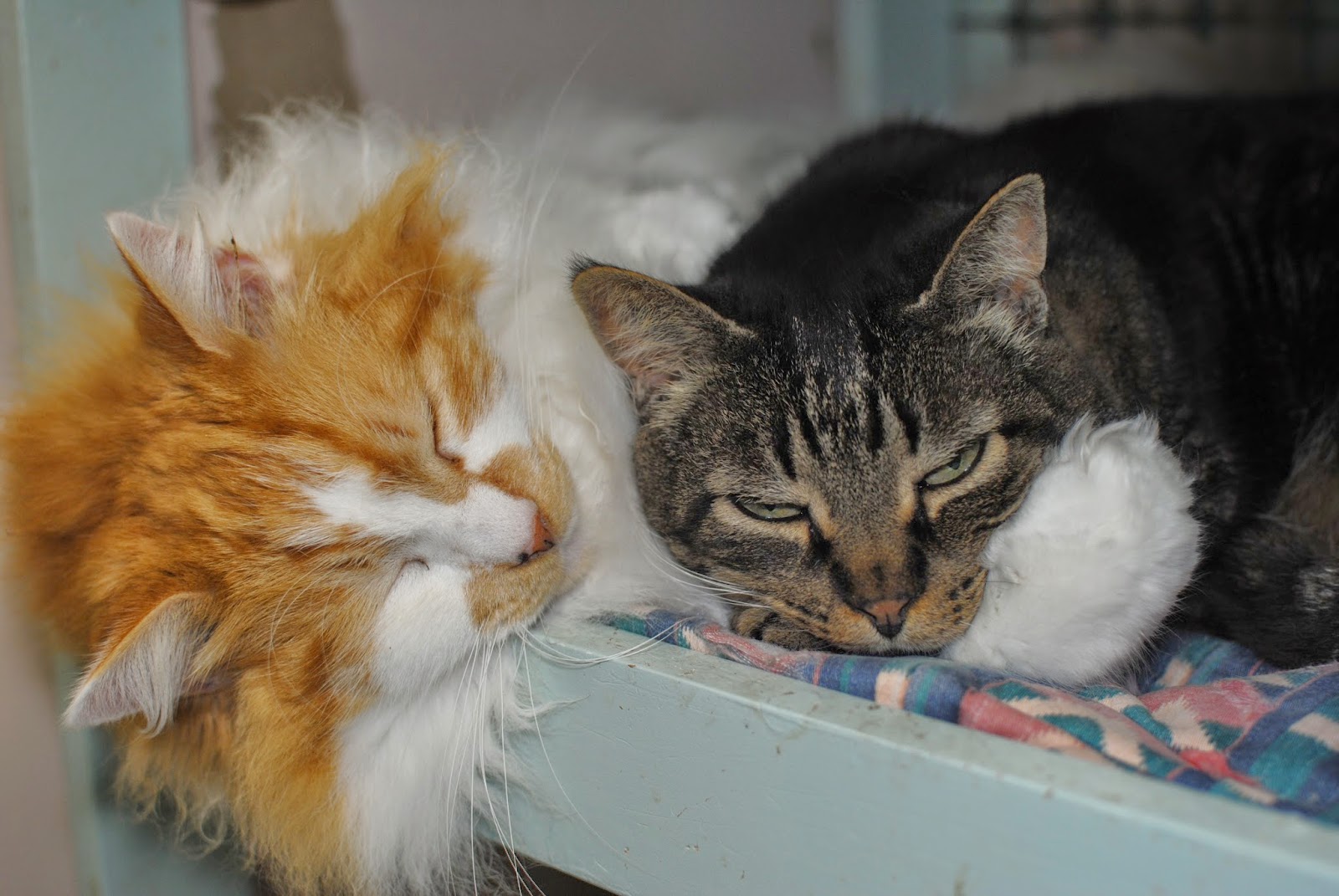 Mario & Shrek (RIP) - CF
Just over a year ago we lost Mario to cancer and for a while his followers were bereft; Nelly in particular is wary both of people and of other cats and hasn’t found another love. But it was apparent that Mario’s mantle had, at least in part, descended on Salty, who can often be found on the double-wide couch, absolutely surrounded by furry bodies. 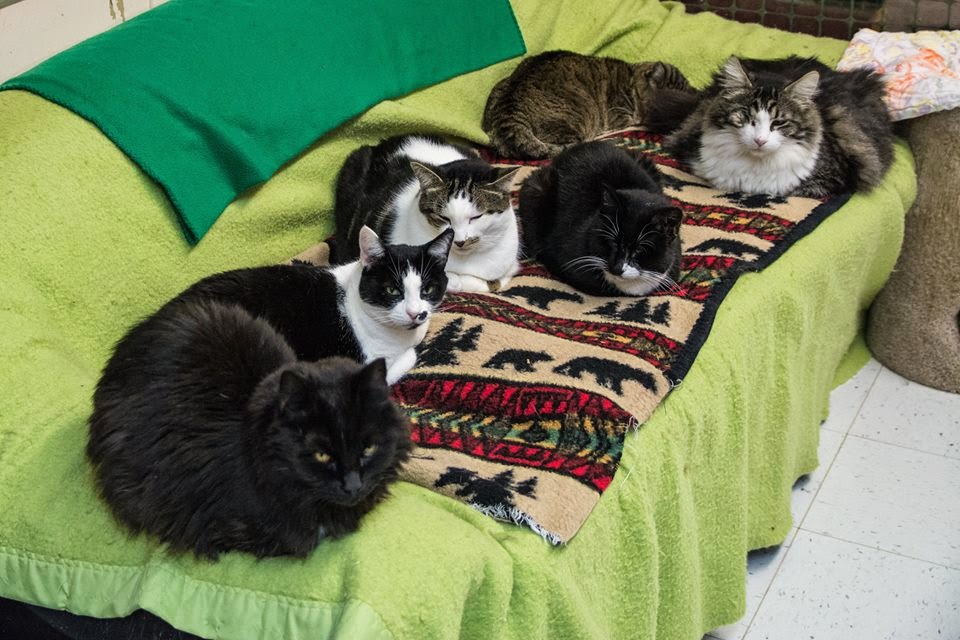 The couch cuddlers - MW
He does seem to have a favourite, though – he’s most often seen with Lana – so much so that we chose their picture for the February picture in the calendar this year. 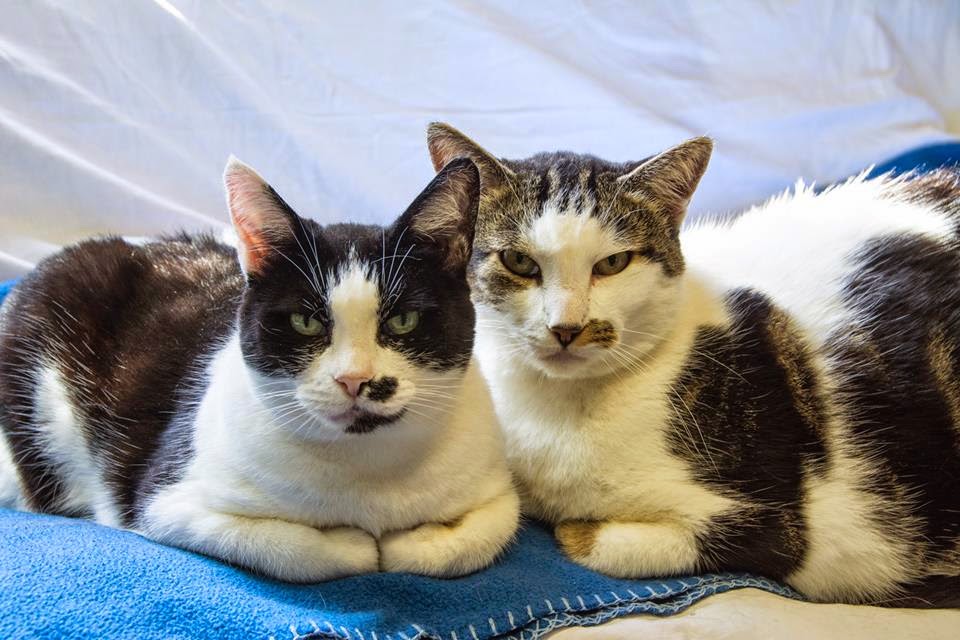 There are a few other cats who seem to have that magnetism.  Kiddie is a double-wide table-top cuddler - frequently found sleeping (or trying to) with another buddy 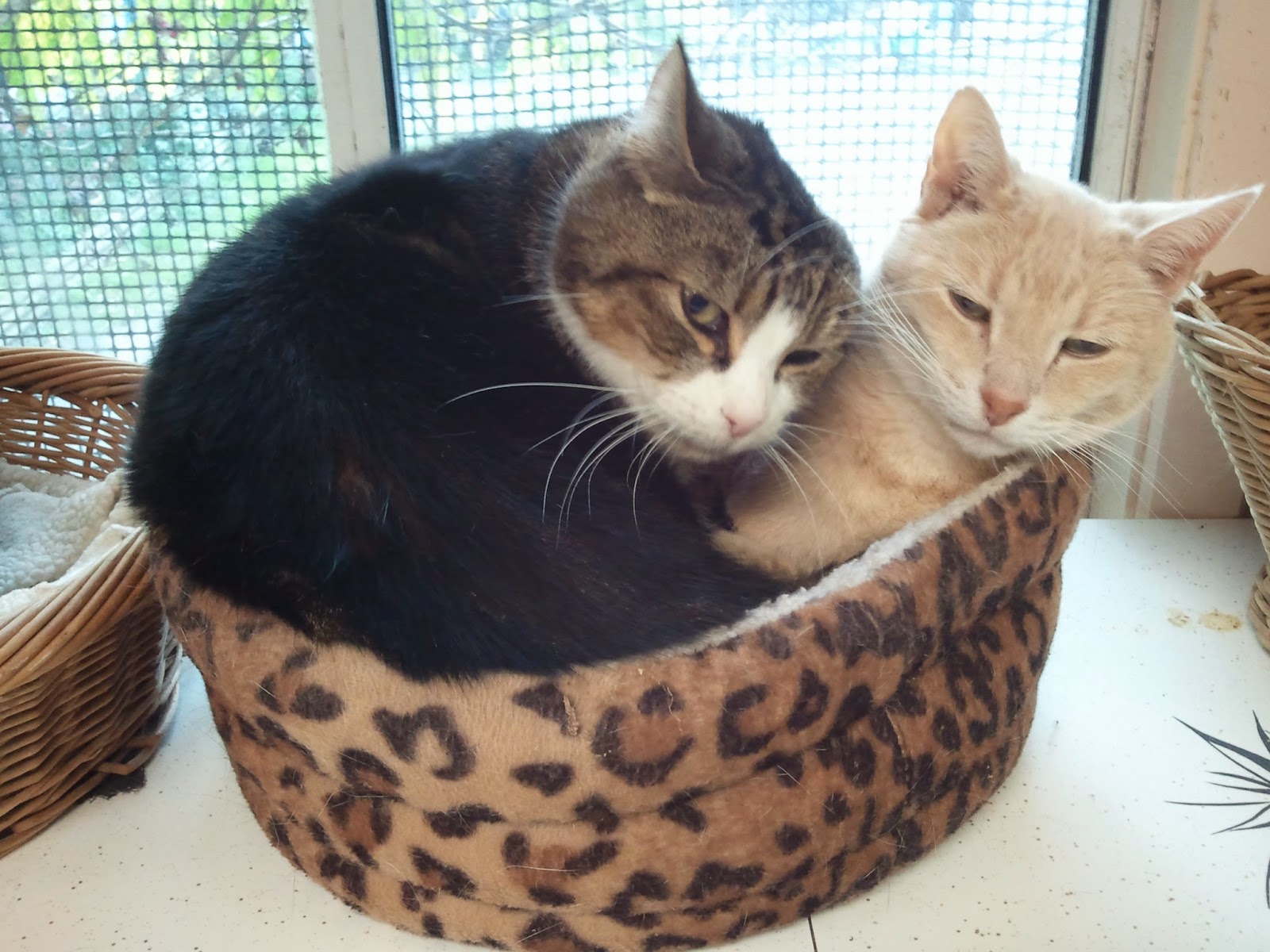 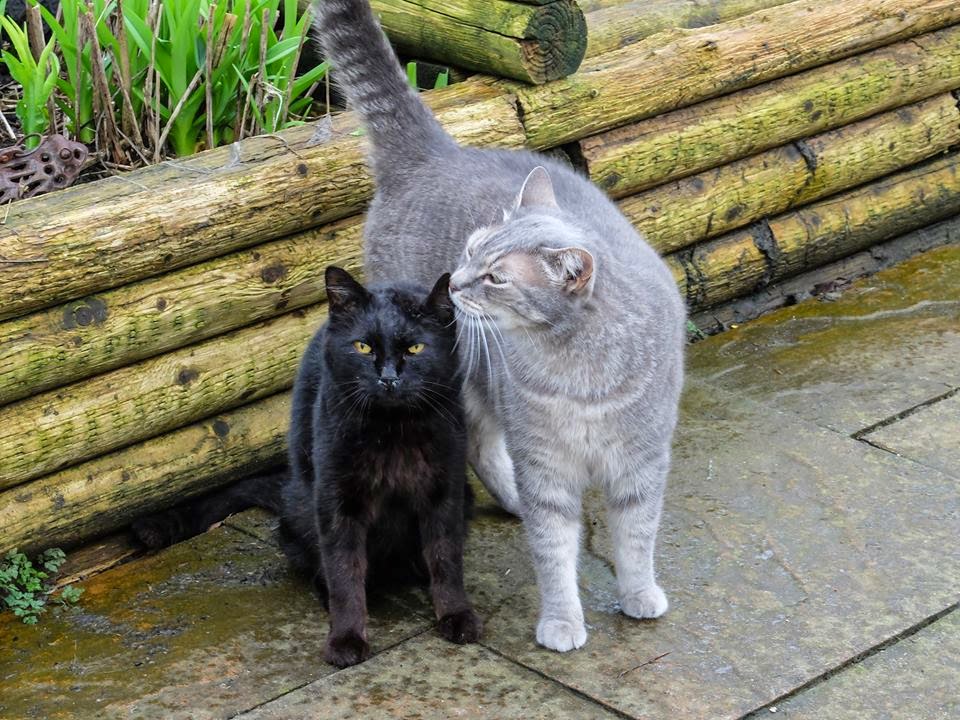 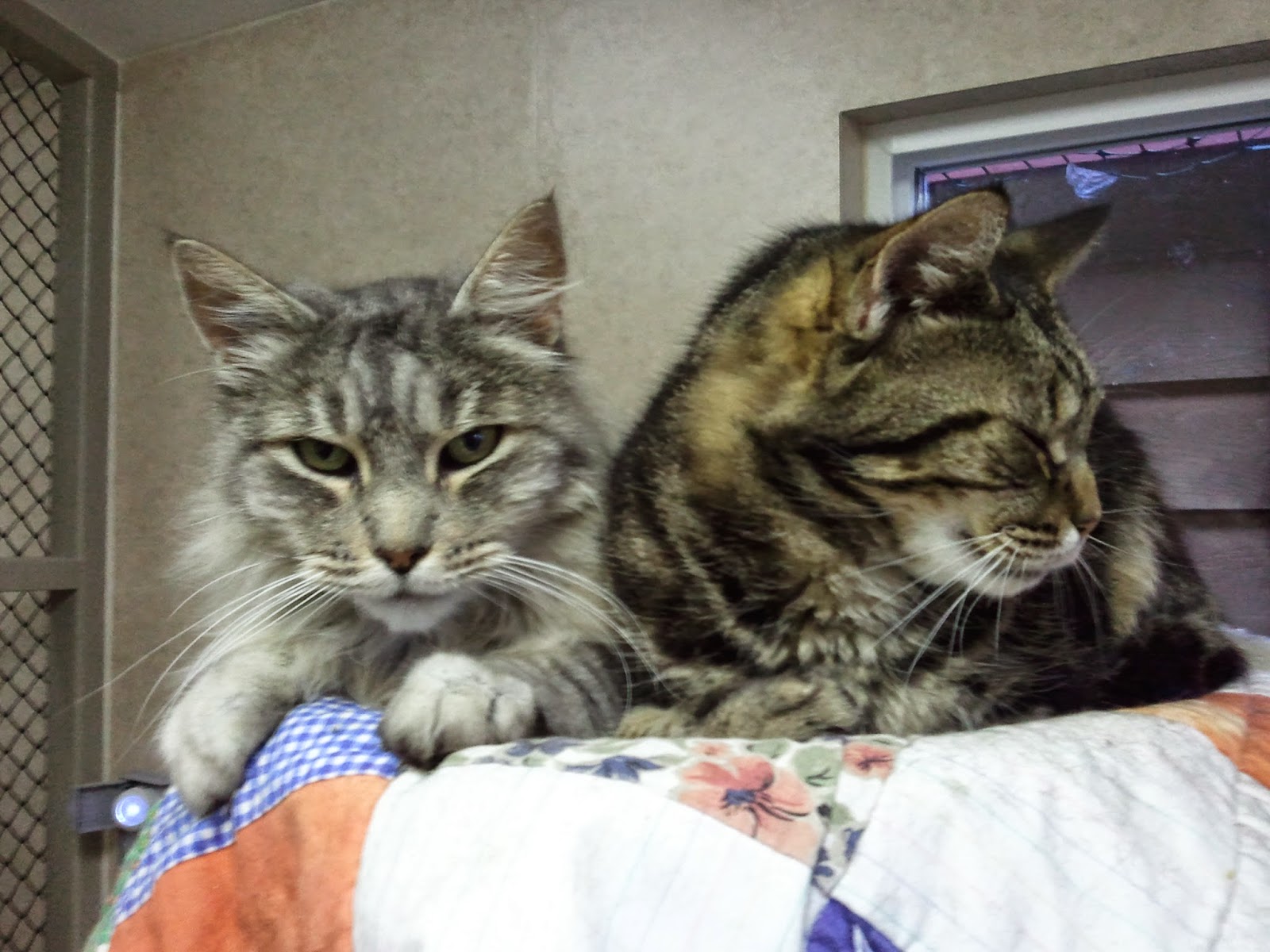 Silverfox & Cheetah - BC
Sweet Pea is often avoided by humans, because of her dirty back end, but quite often she can be found cuddling with one of her buddies – Lillix, in this case 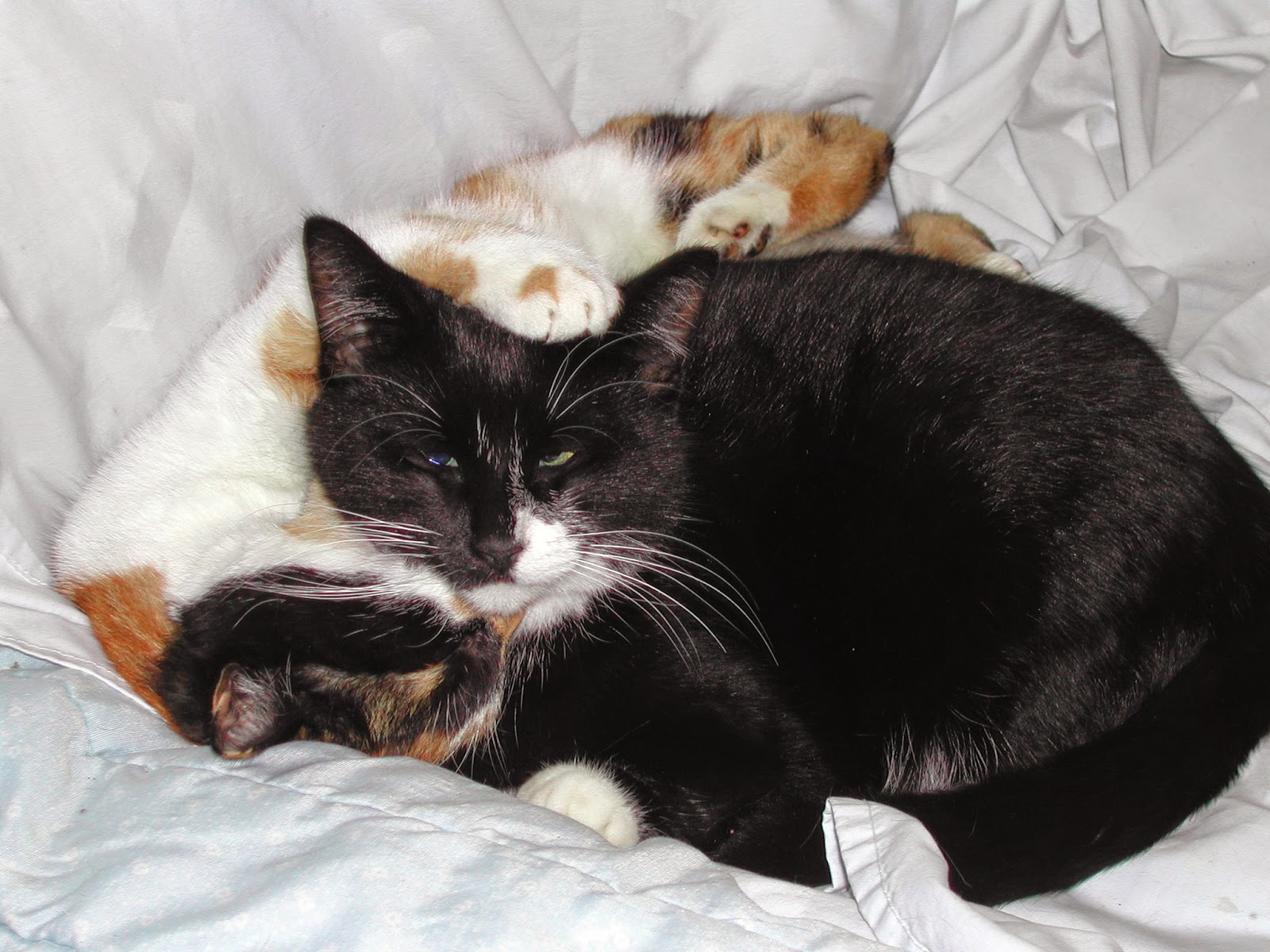 When Shuga was diagnosed with feline leukemia, she and her buddy Esme were delighted to be reunited in the Val Jones enclosure. Many of the AIDS cats have become so as a result of fighting in their feral days – at the Sanctuary, “fixed” and fed and warm, they’re more often found cuddling together than doing battle. And now we discover that the newcomer in Old Aids, Bubba, is another charmer like Mario, for both cats and humans. Even the alpha male, Merlin, seems to gravitate to the new boy, and shy Kojak was seen being tenderly washed by him.

Due to some complicated quirkiness of cat genetics, all-orange female cats are quite unusual. Only about four out of every hundred orange cats are female.   There are a number of orange-and-white females at  RAPS’ Cat Sanctuary but all-orange ones were seldom seen.  Until recently anyway, that is.   For some reason, we suddenly seem to have acquired a few of them.  Brady is the most recent  orange female to arrive – more on the others in upcoming blogs. 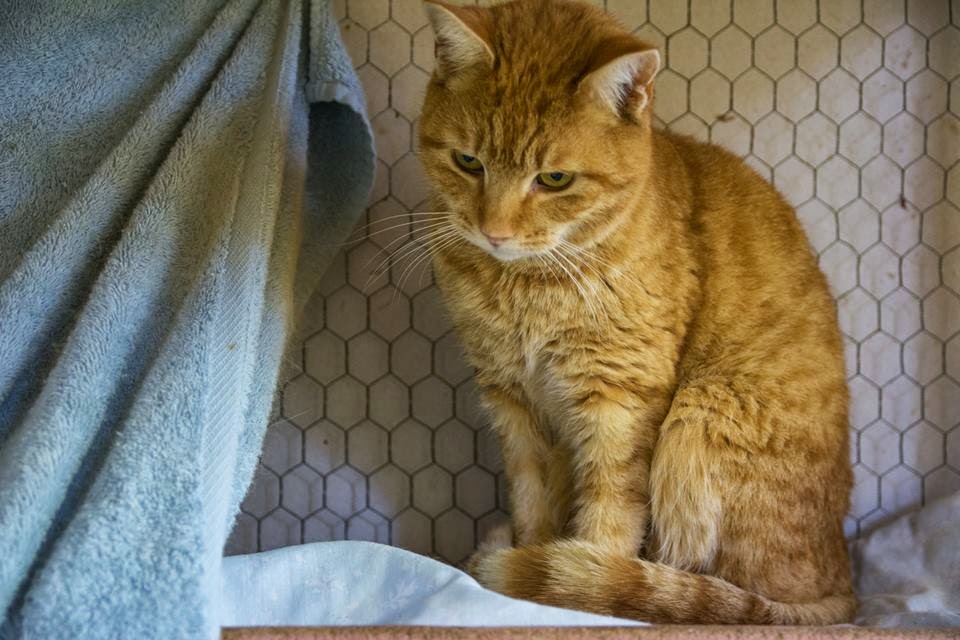 Ten-year-old Brady joined us last December, around the same time as big orange-and-white Bubba.  Both of them have feline leukemia and were transferred to us from other cat shelters that  were unable to keep cats with this condition.   Although she’d never met Bubba before coming to the Sanctuary, Brady, like most people and several other cats in the leukemia area, has apparently fallen under his spell.  It seems that Bubba takes after Mario, another big handsome orange and white cat who was also a magnet to other cats. 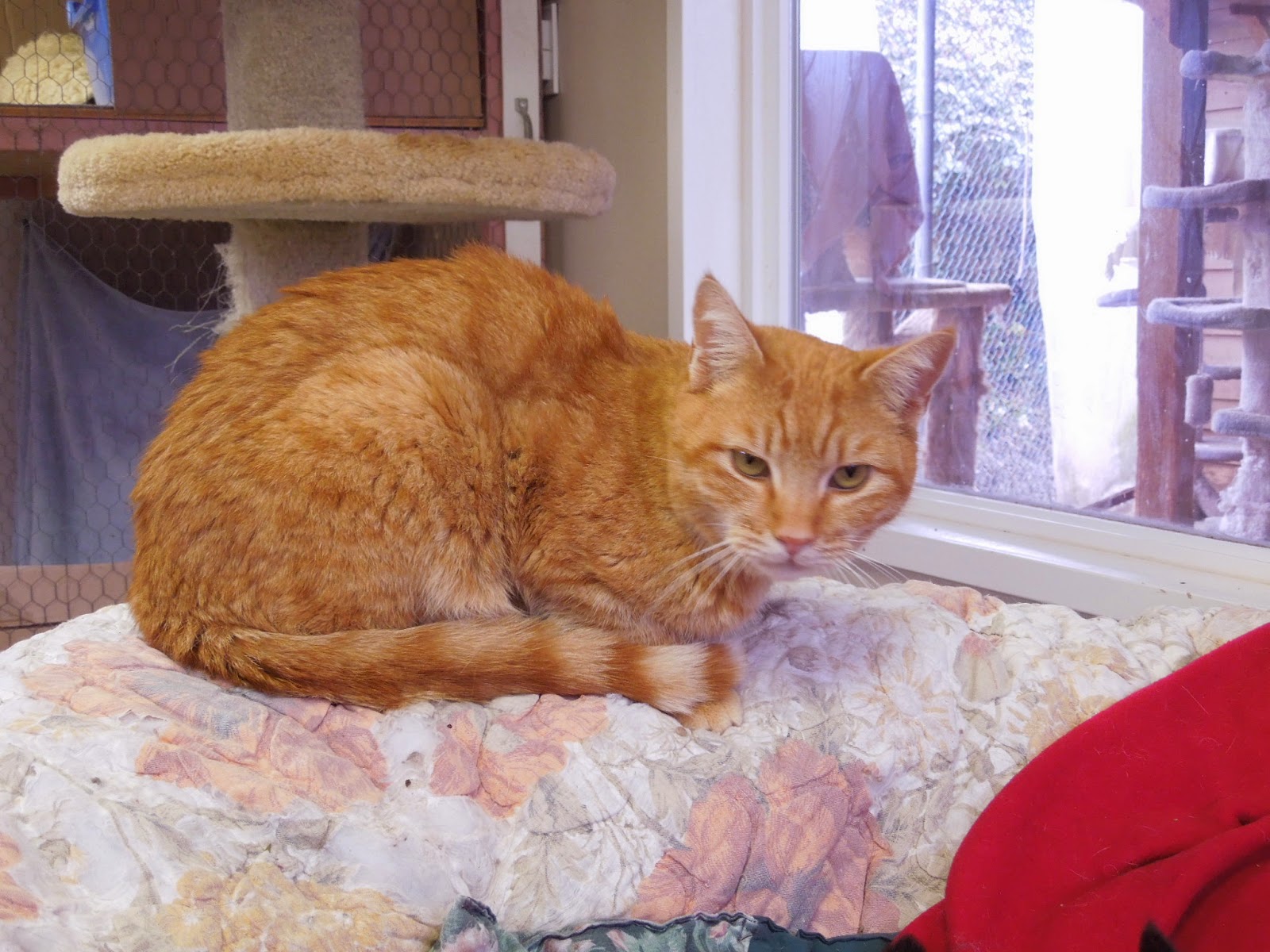 At first, when still in a cage, Brady was very scared and would hiss and back away from any human encounters.  She gradually mellowed a bit but remained quite shy until she was allowed out of the cage.  Since then, although she still has skittish and reclusive days, she’s turning into a friendly and happy little cat.  I haven’t actually witnessed her cuddled up with Bubba, but she’s often part of the cuddle-puddle in the big “Papa-san” chair. 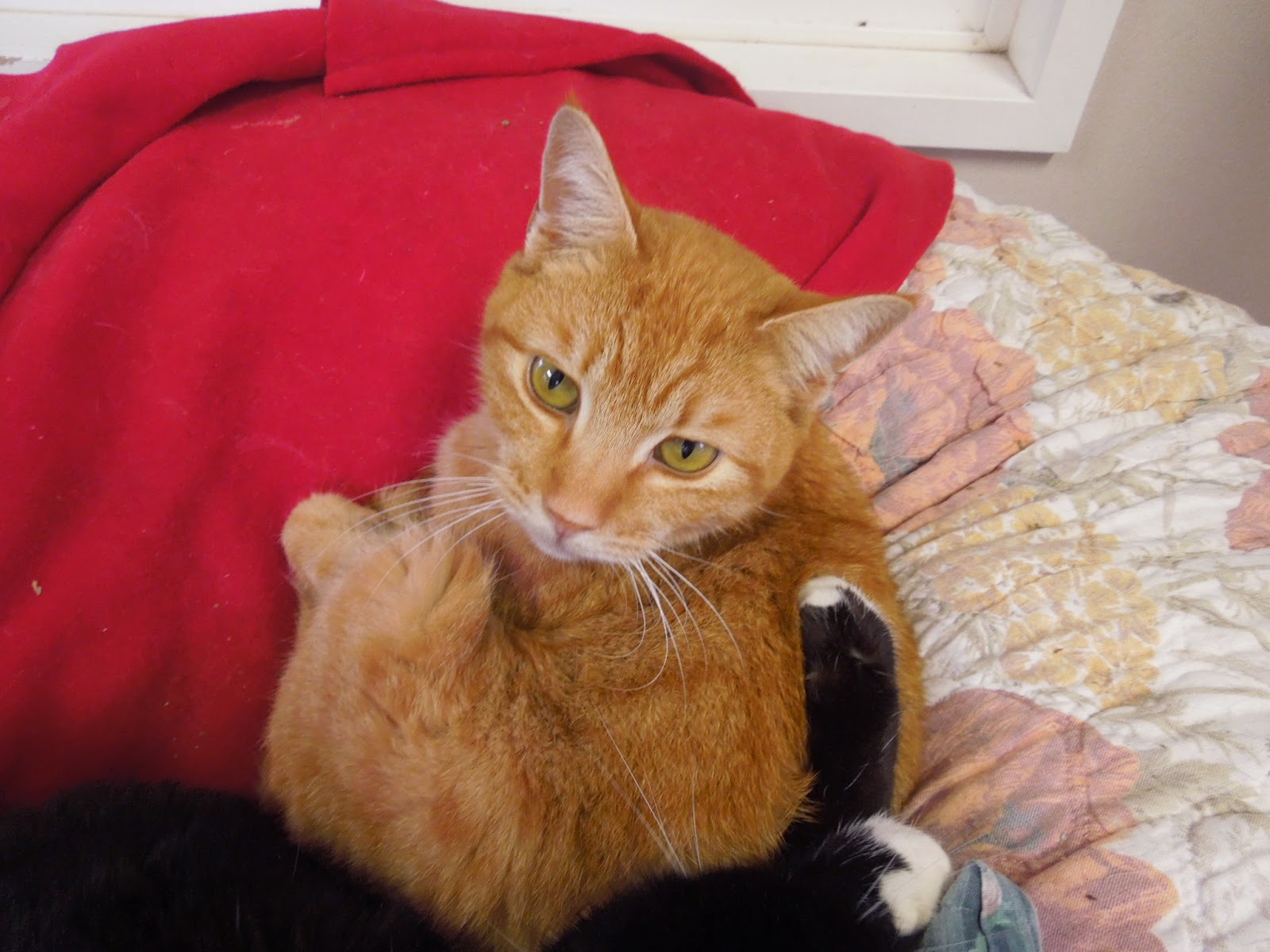 When I found her there the other day, surrounded by Lisa Marie and several black cats, she was quite insistent that I pet her, even pushing her little head under my hand when I tried to pet Lisa Marie!  She then proceeded to do a little head-stand and somersault into the middle of the chair so that I could give her a tummy rub!  She must have realized that this was being a bit too forward  and maybe a little embarrassing so she scooted under the chair.  I was able to coax her out into the open with a stringed toy but the petting and tummy rubbing session was over for the day! 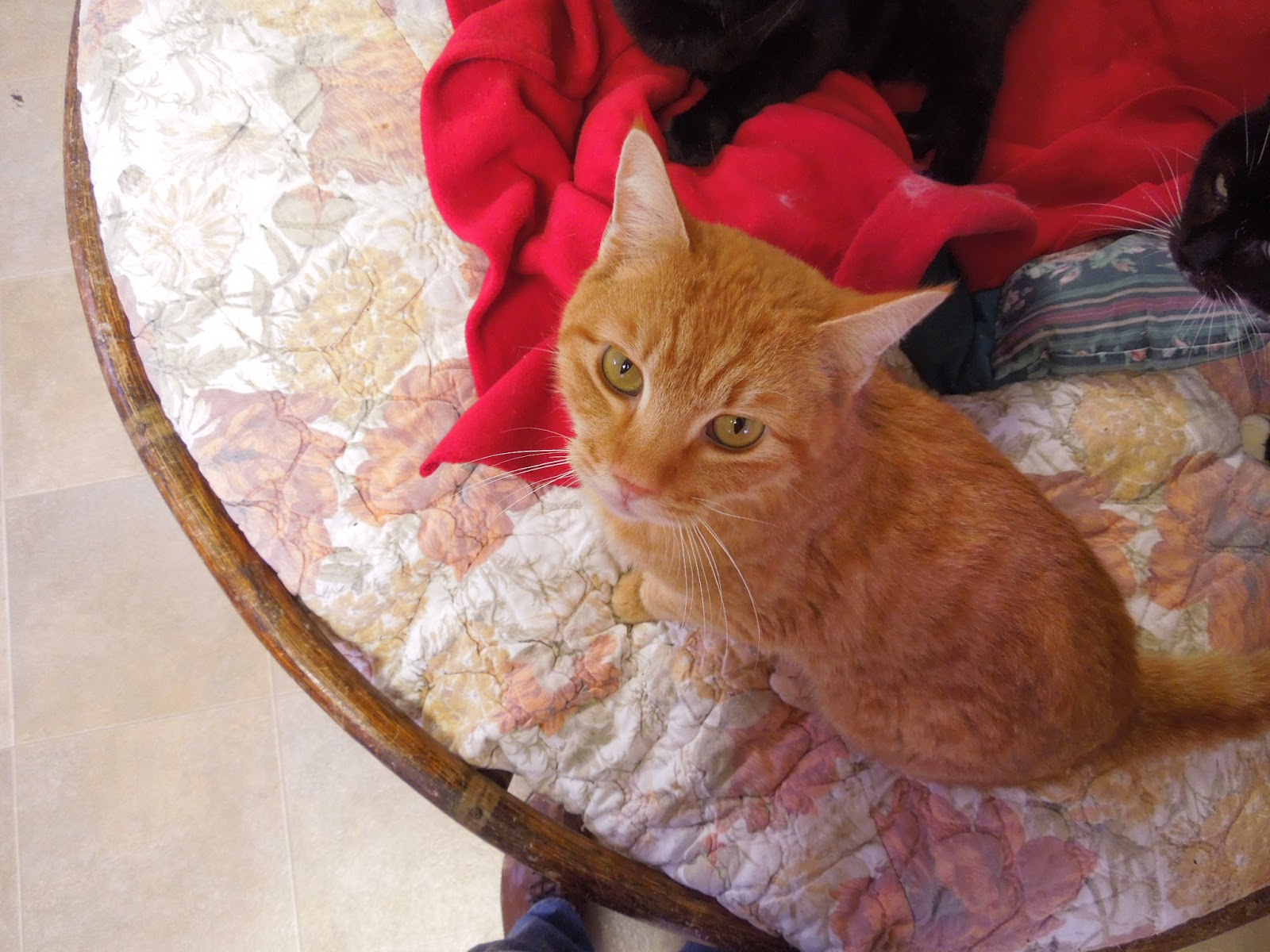 Even though she’s not totally comfortable with our attentions just yet, she’s a very different cat from the scared and hissy one who first arrived.   And, being an all-orange girl, she’ll always stay just a little bit more special than the rest! 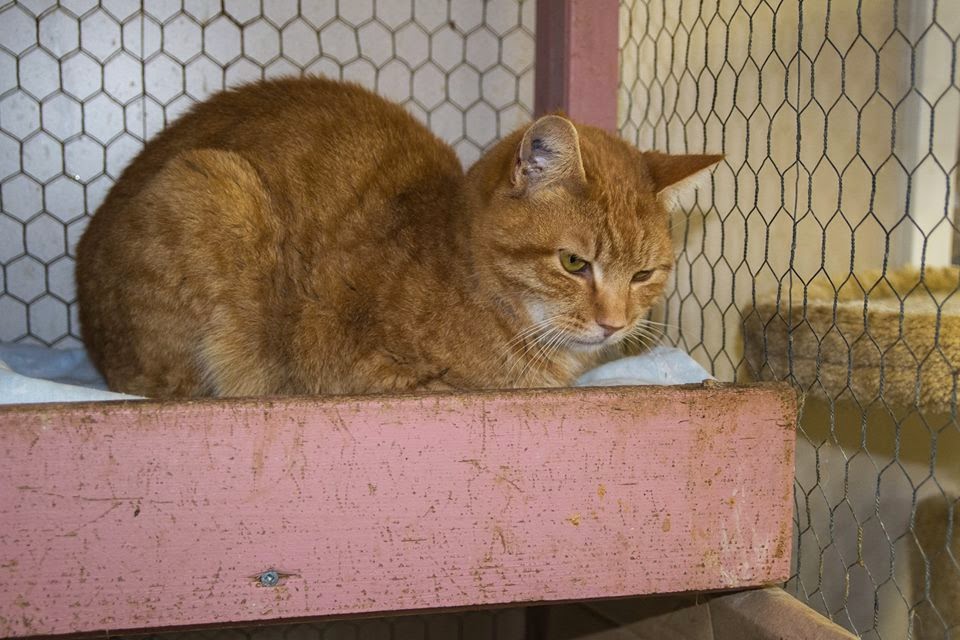 When Claire first conceived this blog, it was intended to introduce all of us to the joys of life at the Cat Sanctuary, and to the quirks and cuddles of a great variety of cats. That first post was in August 2009, and was titled 800 Cats.  And yes, it really was 800 cats – the classic Trap-Neuter-Return of feral cat management can only go so far in a community like Richmond in which you blink and a new neighbourhood is developing. Often we trapped them, knowing that their homes were likely to be destroyed before they’d completed vet care, and so the Cat Sanctuary grew… and grew… and grew…
Fast forward to the beginning of 2015, and those numbers are much smaller. Some cats have gone to the No 5 Road Shelter and found new homes; some have had a visitor fall in love with them and end up with their own family; some very lucky “unadoptables” have been given a second chance with a volunteer who has known their quirks and taken them anyway. But many have died. There are still cats around who were “original inhabitants” back in 2000 and are now visibly aging, and there are many cats that came to us at an indeterminate age, and are now clearly seniors.
The Moore House is often named the “Gericatrics” – but the cats there aren’t so much old (though they are that too) as needing quiet space, which is not always available in the rest of the Sanctuary. There are more geriatric cats in other areas – cat who we love dearly, and for whom we worry, as one worries about an elderly relative.

Numbers are down, but the work load is up. Older cats mean a greater occurrence of the conditions old cats are subject to: kidney disease, hyperthyroidism, diabetes, and always dental problems. A cat who feels unwell frequently doesn’t want to eat, and has to be force-fed so that lipidosis (fatty liver) doesn’t become an issue. We’re a no-kill organization, and it’s hard to walk that line that determines when it’s time to let a cat go. For all of us, it’s painful to come in and be told that a favourite has passed – sometimes we’ve known it’s coming, sometimes it’s out of the blue.  It has to be hardest on the staff, who live with this on a regular basis. The team of kitty-comforters are often working with just those most frail, sick cats – caged for treatment, needing human comforting, and cats to whom it’s very easy to become attached. Those of us who love the leukemia cats know that they are more fragile than most; a leukemia cat can be fine one day and gone a week later.
So how do we deal with these deaths? – how can we not have it overwhelm us? For many of us – faith or no faith – we will talk about the Rainbow Bridge, and about the feline friends that are waiting. We grieve – for the cat that has passed, and for ourselves – and that may take more or less time; grief is what it is. But we also know that these cats have known great love here at the Sanctuary; that many of them have gone from leading potentially short, dangerous lives as ferals, to being cuddled and comforted in their lives and in their passing, and that we have made a difference for them.We all of us know the grief that hits us when a loved pet dies – and we know that dealing with death is an inevitable experience for us, because their lives are so much shorter than ours. But most of us don’t make that a reason not to have another cat – out of that painful experience of death can come a new chance at life for another cat.

Before humans die, they write their last Will & Testament, give their home and all they have, to those they leave behind. If with my paws, I could do the same, this is what I'd ask...
To a poor and lonely stray I'd give:
-My happy home.
-My bowl and cozy bed, soft pillows and all my toys.
-The lap, which I loved so much.
-The hand that stroked my fur and the sweet voice which spoke my name.
I'd Will to the sad, scared shelter animal, the place I had in my human's loving heart, of which there seemed no bounds.
So, when I die, please do not say, "I will never have a pet again, for the loss and pain is more than I can stand."
Instead, go find an unloved cat, one whose life has held no joy or hope and give MY place to HIM.
This is the only thing I can give...  The love I left behind.