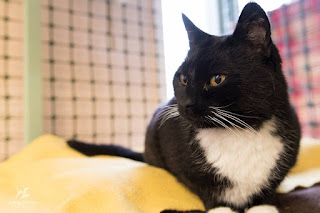 In the summer of 2016 a handsome tuxedo stray was picked up near Steveston Highway. With no tattoo and no chip, he was held at the Shelter for possible claiming, and ultimately for adoption.  But wonderful as the work is at the Shelter, it’s a high-stress place for some of the more highly-strung inhabitants – and Romeo was one of them. Too much action, too many noises – he took it out on the cats around him when he was allowed out, and ended up having to be moved from one room to another to avoid other alpha cats, Finally he began expressing his feelings in pee, and reluctantly the Shelter staff had to accept that he was unlikely to be adopted, and he was brought to the Sanctuary. 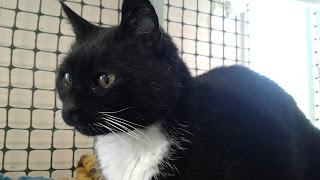 BC
Romeo endeared himself to staff and volunteers alike within the first week. In his own cage (much more space than he would have had at the Shelter), visitors were greeted with head-butting and shoulder-climbing.
He’s older than he looks – the vet thinks he’s about seven, and he has some arthritis in his hips, which we will need to monitor.  For the first while his cage included a little staircase so that he could access the floor more easily, but he quickly established that as long as he didn’t have to negotiate slippery blankets on a chair, he could hop up and down fairly easily.
Now out and about, he still tends to claim “his” cage, curling up in a box out of the way. But he’s also been exploring the great outdoors when the weather is fine, and, though not actively seeking feline company, he seems to tolerate the other cats around him.
Obviously the Sanctuary feels a safer place for him than the Shelter did – and he might well turn out to be a cat that, in spite of his medical issues and reactions to stress, finds a human here to take him home.

Email ThisBlogThis!Share to TwitterShare to FacebookShare to Pinterest
Labels: Romeo

Tall, dark and handsome is often how heroes of romantic novels are described. When it comes to cats, it’s difficult to think of them as actually being tall so, well, two out of three ain’t bad, as the saying goes. There are plenty of black cats at the Sanctuary and it’s not easy for me to distinguish one from another, despite them exhibiting a wide range of what one could consider “handsome-ness”.  Frequently, when I’ve been asked the name of one of the black cats, I’ve resorted to pleading ignorance and confess that I know it just as “Black Cat # 42”.
Newcomers to the Sanctuary, Kiefer and Indiana are among those that can definitely be described as dark and handsome!  Long-haired Indiana (aka Indy) has soulful yellow eyes and a lovely “ruff”, while his short-haired friend Kiefer has beautiful green eyes and lynx-tipped ears so they should be easy for even me to identify once they’re out and about with the other cats in the single-wide trailer.
Fortunately, there aren’t too many black cats in that building and most of them have something distinctive about them – Belinda is tiny and very fluffy, Blackie usually swats me as I walk by, Harvest has an unusual little white spot on his chest, and so on.
Until they’re ready to be released from the cage, Kiefer and Indiana have “the best room in the house" – very spacious and with a window facing the front courtyard – but so far I’ve only once seen one of them (I think it was Indiana) look out the window to enjoy the view.  They’re still a bit uncertain about their new situation and are most comfortable cuddled up together on the shelf inside their cage.
Although the sign on their cage door says that they’re semi-feral, if you approach them slowly, it doesn’t take long for the purrs to begin once you start petting them.  When one is petted, the other almost always pushes his head in under the petting hand to get some attention too.    Kitty Comforters and other volunteers spend lots of time with Kiefer and Indiana to help them realize that they have nothing to fear from us so that, when they’re released from their cage, they’ll be willing to accept all the love and attention we’re going to give them.   I’m determined to remember their names then so that neither one will ever be just “Black Cat # something-or-other” to me.

A few months ago I blogged about the variety we find in cats’ eyes, and I’ve been looking round the Sanctuary at the similar variety found in feline ears.

The primary differential is whether the basic shape is rounded or more pointed. There are a lot of rounded ears to be seen, and the proportion of ear to skull shape can make that more or less obvious.
Other ears are more pointed, and in many cases, the point is emphasized by a little tuft of hair at the apex – a lynx-tip.  Sometimes the tuft is the same colour as the cat, which enhances the point;
in others, the lynx-tip provides colour-contrast.
Ears are a part of body-language; we all recognize the flattened airplane-ears of a fearful or angry cat
though in some cases flattened ears are just the way that cat is made
When doing TNR (Trap-Neuter-Release) it is common to notch or snip the ear of a neutered cat so that it is clear that it doesn’t need to be trapped again when the colony is checked.  Most of our cats have unmarked ears because they come to us from having been spayed/neutered.  Little Marilee is one of the exceptions; when she was first TNR’d she was returned to her colony with the common clipped ear; it was only when her tail became injured and had to be amputated that it was decided that she needed to remain with us rather than return to her colony.
Haematoma ear is seen in a number of cats. An infection or a bruise can cause painful swelling between the skin and cartilage of the ear. Untreated, it fills with blood and then easily bursts, causing the ear to crumple. If it can be caught early enough, it is possible to minimize the damage.
Little Orange’s ear swelling was discovered early enough that just the top of the ear flap was affected. He was not the most cooperative of patients!
Bossanova came to us as a feral with his ear already well crumpled. Left to itself the haematoma will heal, but unevenly, leaving the feline equivalent of a “cauliflower ear”
Long-time volunteers will remember double-haematoma cat Cara, who had both ears affected – it never seemed to bother her!

Especially among the formerly unneutered male cats (many of them inhabitants of the New Aids pen) we see evidence of a life that involved fighting for their lives – and battered ears are definitely a common casualty.
It is interesting that ear-hair, something that is SO aesthetically displeasing in humans, can be so pretty in cats.
Here are some of our feather-iest ears!

Pico was recently surrendered to RAPS by her owners because she wasn’t using her litter box.  There were other animals in the home so maybe she was simply trying to mark her territory, as sometimes happens. Her family had patiently tried to resolve the problem for some time but, despite their love for little Pico, she couldn’t stay in their home.  At the Sanctuary, she’ll be just one of many cats there who, for whatever reason, prefer to “do their business” outside the litter box. 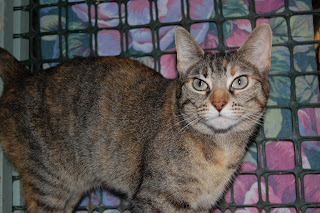 Pico’s still living in a “private suite” (i.e. large cage) at the Cat Sanctuary so it remains to be seen what she does once she’s out and interacting with the many cats there.  One thing is certain: She’ll be loved by all the humans at the Sanctuary, whether she uses a litter box appropriately or not.  She's not so keen on the other cats, from inside her cage, and time will tell how she interacts with them. 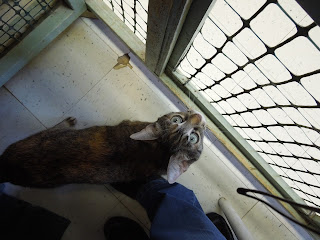 MM
Pico’s a cute and very friendly little thing who always appreciates a visit and an opportunity for a little lap time.   She’ll call to anyone passing by her cage to come inside and spend time with her, which they usually do.  How can they resist those pretty green eyes and the meows of invitation? 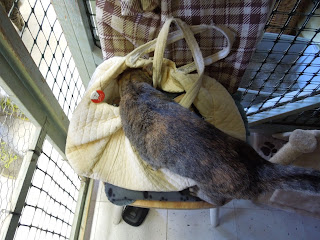 MM
She’s still just a youngster – not quite four years old  – and a pretty active one at that.  Whenever I’ve been in her cage, she gets so excited that she practically spins around in circles.  A quick head butt to my hands, a brief jump onto my lap, then down to the floor for a little spin, and …. repeat.   She likes to have company when she “dines” so would stop all that activity only long enough to munch a bit of kibble from her bowl then - happily off again.   The little scamp was determined to squirm into my bag to snag a bag of catnip from it but all my attempts to get her to pose so that I could take a nice photo of her pretty face failed.  It took someone with a more sophisticated camera than mine to capture her when not in perpetual motion. 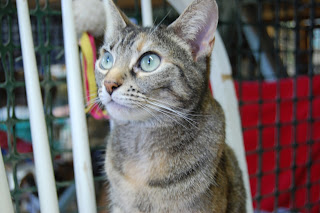 BC
Pico will soon be released from her cage and able to roam about. When that happy day comes, we may have a problem at first identifying her among several other friendly tabbies.  We’ll have to look for those green eyes to know for sure it’s her!