Vesper and Fable - bromance or marriage?

These two handsome guys arrived with us a couple of months ago, and everybody loves them!
Vesper and Fable have come to us from a family who had a number of cats. They’re not from the same litter, but they’re about three months apart in age, and from all accounts, they have been bonded together since they met. They’re about 10 years old, and have been living as inside-outside cats – which makes them very lucky, since outside is full of perils like coyotes, raccoons, cars, poisons and other things that can make a cat’s life much shorter.
They’re neutered, but even neutered cats can get a bit territorial, and that may be what happened – one too many encounter with a stray cat, or an unexpected stress,  and they started peeing in the house.  Hoping to prevent their other cats from indulging similarly, their owners brought them to us. It will be interesting to see if the abundance of cats at the Sanctuary will mean they continue their bad habit, or if they just say "whatever..." and learn to tune out all the other smells.
After a short stay in the quiet of the Moore House, they were transferred to roomy central cage of the Hill House, where they held court for several weeks. Cleaning/feeding volunteers and Kitty Comforters alike took opportunities to sit with them, and once over the initial anxiety of their move, they relaxed and enjoyed the attention.
Fable is the more dominant of the pair; he’s very protective of Vesper, and now that the cage is open, he’s keeping an alert eye on his buddy, making sure that everything’s all right. He’s a cat that’s not always easy to photograph, because he’s always on the move.
Vesper is a cuddle-bug, happy to lap-sit. He’s the more stay-at-home of the pair at the moment, preferring his cage territory, and defending it from other cats with warning squeaks.  Once he gets out and about, he will be easily confused with Miller – the latter is a bit bigger, with a slightly harsher coat; Vesper’s coat is softer, he has more flecks of white in it, and a little Harry Potter scar-like marking of white hairs on his face.
Both are now venturing further afield, especially in the evening, when things are quieter and wet food is on offer. They’re not interacting much with other cats, but they love human attention.
We’ve had cat-pairs come in before, and then drift apart – Wickem (soon to be profiled) came in to us with his buddy Gidget and inhabited the same central cage in the Hill House. That was a relationship that didn’t last; Gidget has relocated to the Connor, while Wickem remains in the Hill.  I have a feeling that it won’t be the case with Vesper and Fable – after 10 years together, they’re not going to let a relocation to the Cat Sanctuary affect a very happy relationship!

Who could ever look at this cute face, and not fall in love? 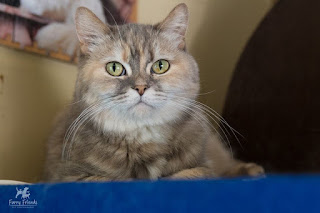 MW
That was certainly the case for this pretty girl, who came into the SPCA in Vancouver as a pregnant mom, and was adopted by a couple who just fell for her. Like many cats in a shelter situation, she was very shy, and they took her home and named her Pixie, confident that the shyness would wear off and she would warm to them.
Didn’t happen! 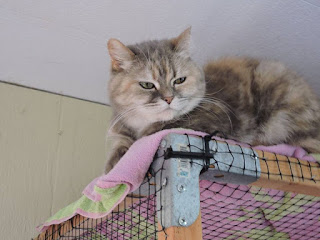 MD
They must have been very good cat-parents, because they were endlessly patient with her shyness, and her ability to hide herself away.  They didn’t push her to interact, but as any owner of a feral cat knows, you wonder how long you can live with a shadow permanently lurking under the bed.  By the sixth year of her time with them, she had progressed to sitting beside her human dad on the couch, and allowing just a little petting before running away to her hiding place again. 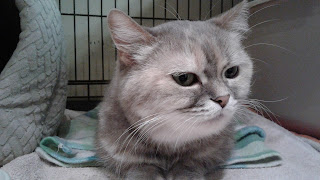 BC
Then something happened that made it necessary for them to move – and not just a single move, but one that would probably involve several transitions.  They loved her, and they knew that this would be very stressful for her. And so they brought her to us, seeking sanctuary for her, and a place where she might feel safe. 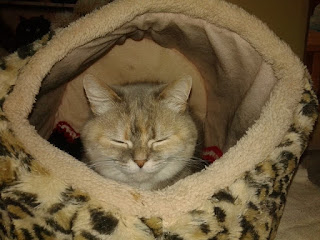 MD
Her original name of Pixie suited the scared, wary creature she was at the beginning, but Leslie thought she needed a name-change to suit the classy little cat she could be.  Her lovely dilute colouring reminds us somewhat of Princess Diva and of Latte - both of whom are very much their own personalities - and Leslie named her Chanel, hoping that she would grow into the confidence of her classy namesake. For the first while Chanel lived in the DoubleWide, in a quiet corner cage. She accepted visitors from the shelter of her box, but firmly stayed inside – the volume of her purring made it clear that petting was welcome, but her non-appearance also sent a very clear message. 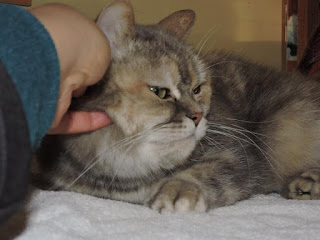 MD
Finally she was moved over to the Moore House – the area also known as “GeriCatrics”. Chanel was not that old – probably no more than 7 or 8 – but the quiet life in the Moore House was much more to her taste.  For some time she preferred to hang out in a shelter of some kind – preferably one that was just out of reach. She didn’t allow for our determined Kitty Comforters, who were quite prepared to perch precariously on a chair in order to pet her and remind her that humans have their uses. 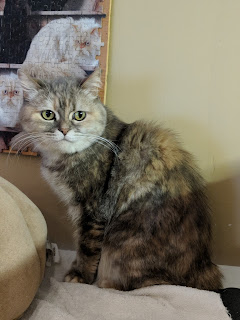 CP
In the last year or so she has improved in confidence, wallowing in caresses when offered, and interacting fairly peaceably with the other cats – in particular, with Sophia, with whom she can often be found snuggling. For Chanel, the Sanctuary is truly a place where she can feel secure.

From time to time we still have cats coming in from a privately run Sunshine Coast shelter that is reducing numbers in preparation for closing. One trio that arrived together ended up caged together in the Hill House, and, a year later, they can still be found in the same area, now that they’re out and about.
The most striking one of the three is Figaro, introduced a few weeks back. Figaro is sometime confused with Spirit, also a handsome tuxedo, but Figaro’s facial markings are much more defined, and he is definitely more shy with humans.
He is interested in us, and will accept treats if they’re thrown his way, but he’s usually not ready for more than the odd fleeting touch; he's very selective in the people he will approach, and from whom he will accept petting.  What he does like is to be touched by other cats! He has shown himself to be something of a cat-magnet in the front courtyard, and has a following of friends to rival Daniel’s.
Many of them are little black cats – I’m still trying to sort out Beetle and Frisky, Cyrano, Shady and Reefer.
Reefer was the second of the trio in the Hill House cage. He’s less shy than some of the others, and is one of the cats that seems to have a constant low-grade cold – at least, he can mostly be distinguished by a slightly snotty nose, though it doesn’t slow him down at all. He and Figaro romp and play-fight, especially when egged on by a little catnip
The third of the trio is a very different sort of cat.
Her name is Hunny Bun, and we’re told she was found as a kitten in the same place as Honey Bear, the stunning Siamese cross in the back courtyard– it’s possible that they’re litter mates, despite their very different appearances, because female cats in heat are quite indiscriminate about their partners, and litter-mates may have more than one sire.  Honey Bear came to us before the other three, presumably because he has a neurological problem and was therefore easier to catch!
Hunny Bun is very shy, wary of humans, and quick to find herself a hiding place when approached. Like Reefer and Figaro, she spends most of her time in the feral cat area we call “The Old Rabbit Area”- a section of the courtyard that is covered but has an outdoor feeling. All the shelves in it are draped so that feral cats can feel safely hidden – unlike the beds in the Connor or the Hill House, which are uncovered.
We have a number of cats who arrived as ferals and now are quite relaxed with human contact – Jamie, Gilbert, Pogo, Latte... to name just a few. We hope that with time and patience, these three may join the “I Love Humans” club at the Sanctuary. 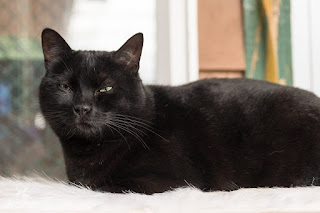 MW
One of the joys of being a RAPS staff person with the right sort of home is that you end up looking after a variety of temporary visitors. Sanctuary Manager Janet is an experienced foster-mom, as well as all the other things she does for RAPS, and she stepped up when a tubby little black cat came in, possibly pregnant.  RAPS pregnant moms are always fostered, so that the kittens can get lots of handling and socialization before coming to the Shelter for adoption. It was almost impossible to do any sort of examination;  this was a cat who was NOT happy about being approached, let alone handled. So Janet tucked the little black cat away in her kitten room, named her Beyoncé, and waited for her to pop – and waited... and waited...
Weeks later, there was still no sign of kittens. Concerned, Janet finally managed to maneuver the cat into a cage and headed off to the vet. One sedative and examination later, the vet said, “Well, actually – she’s a he....”  Rather than the expected C-section, there was a quick neuter surgery, and a one-way trip to the Sanctuary. 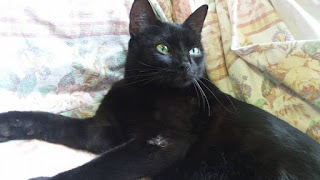 MD
Beyoncé was obviously no longer an appropriate name, so he was re-named Jay-Z. Once the hormones had stopped driving his body, he calmed down quite a lot, and it wasn’t long before first staff and then Kitty Comforters were in, visiting with him. He proved to be quite playful, and a small black paw was often seen under the cage door, dabbling after a toy that had escaped.
Once released, Jay-Z settled well into life in the Double-Wide.  Sometimes black cats can vanish into anonymity, but the cone he wore after surgery left enough mark on his fur that it was easy to distinguish him from the other cats, and by the time it had faded, his personality had made itself obvious. His other distinguishing mark is his eyes – most black cats have yellow or gold eyes (something to do with the melanin in the skin) – Jay-Z’s are the most beautiful pale green. 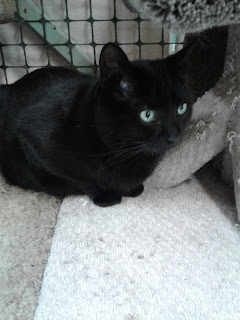 BC
With four on the floor, he’s a stocky little boy; but he’s often found lying on his back, and it’s easy to see how the belly might have fooled everyone at the beginning. He loves to play – wand toys in the hands of a human are his favourite, but he’s often found batting something around by himself. He’s cat-social and ready to join the crowd when treats are on offer, but also happy to have a caressing hand from a human sharing the DoubleWide couch with him.

playing on a sleeping visitor - VL