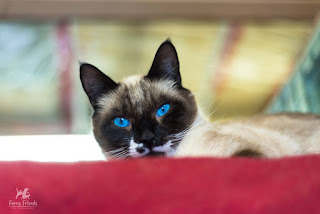 MW
This boy with the stunning blue eyes was introduced a couple of years ago when he came in to us - and very little has changed with him since then, except that people keep taking wonderful photos of him - so this week's blog will be less a blog and more a HoneyBear album. 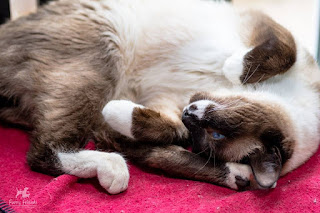 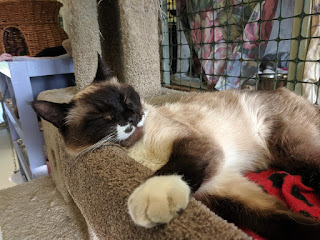 KN
and sometimes that sprawl overflows his sleeping platform. 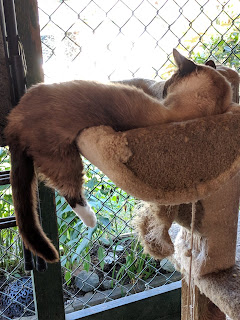 KN
Despite his neurological handicap, he loves to climb up high, where he can survey the world. 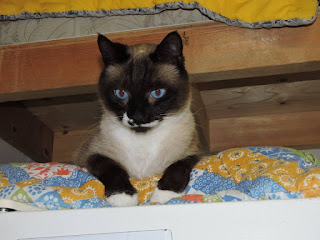 MD
Even when it's hot (and we all know that hot air rises), Honey Bear would rather look down at us humans. 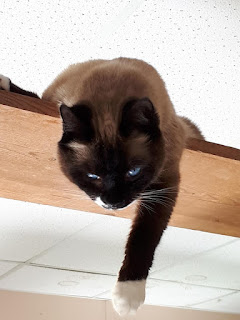 LP
When we had the back courtyard pavers replaced, Honey Bear supervised the work very closely. 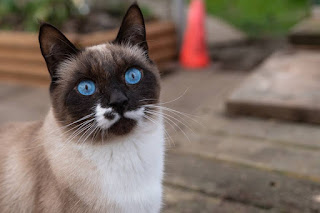 After all, they were laying this big sand-box just for his use! 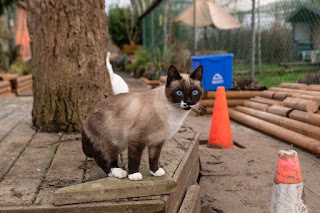 Exhausted from all that supervising, two incontinent boys - Honey Bear and Fido - sleeping together. 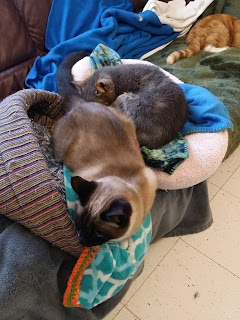 VL
Honey Bear loves to be out in the back courtyard, exploring. 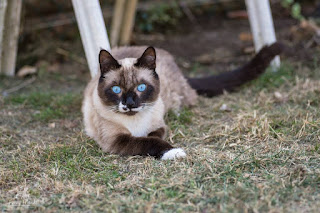 MW
His favourite toy is a wand toy with a leather tassel, and he leaps and competes with Tyson and any other cat brave enough to join in. If he is lucky enough to get possession of it, he will go running off with Tyson in hot pursuit. 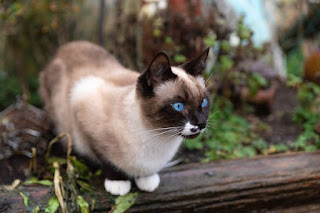 MW
Honey Bear is a striking boy with personality enough for a dozen cats - no wonder visitors always ask about him!

This week's blog comes to us from volunteer PAULINE CHIN
Some of our overlooked cats are also the most sharply dressed in black and white fur – the tuxedos.  Here are some newer arrivals:
Pretty Mabel arrived at the end of 2018, alongside Midnight, Solar, and Libby.  She’s still a little shy around strangers, but warms up with a slow approach.  Her white mask has black markings that come to a sharp point like a beak.  Paired with her gold eyes, her looks make her stand out from the crowd.
We recently took in three black & tuxedo boys.  Gomez initially tested positive for FeLV, but a subsequent test cleared him, and his friendliness made him a candidate for adoption at the City Shelter. He came in with Luke and Taylor, but was the friendliest of the bunch.  His buddies have remained with us. Luke is the tuxedo, with a black spot on his pink nose, and is currently wary of humans.  All-black Taylor is more open to human interaction, but still keeps his guard up.  Luke will scale the walls when he’s in fear mode.  Both have moved from their cage to the deck of the Double-Wide.  They both seem to like toys, although they would prefer we’re not around to watch them play.
Smudge was partly socialized when he arrived.  A woman had been feeding him for a while, but he was still wary of touch.  Once in our care, Smudge recognized his name and used to peek out from the curtain when called.  Now he sleeps on the mattress out on the deck.  He will let us pet him if we approach slowly and quietly.  Sudden, or loud noises cause him to vanish like the wind.  His key marking is the pair of white spots on his lips.
One of Smudge’s feral friends is Jolene.  She has a black face and a white jaw.  She’s another untouchable kitty.  Jolene is fascinated by the laser toy, or if you’re creative, an object reflecting sunlight.
Recent arrival Bodhi is 4 years old.  He’s from a hoarding situation and requires us to win his trust.  Approaching him gently is the key to opening him up, otherwise he’ll enter defensive mode.  Once he relaxes, we can pet him and brush him heartily.  He’s coming around quickly. We hope he'll grow into his name, which means "wisdom"!
And then there’s Whiskers. This 12 year old arrived a year ago.  He’s another typical surrender with the story of inappropriate urination.  Looking at his tattered ears gives the impression he was a bruiser at some point, possibly even the alpha male of a colony.  He’s certainly large enough and knows how to strut his stuff!  Upon release, he often stood his ground and showed off his dominance against other male cats.  Over time, his demeanor softened and now he seeks attention from us.  Whiskers wears confidence and a smug expression.  Sometimes he’s mistaken for Squeakers, but Squeakers is not one to stand out.  Instead, he just looks for a lap to rest on and to be fawned over like a baby.
I would say tuxedos are one of the only cat colours who aren’t known for any cattitude, superstition, or stereotypes. These are only a handful of our many tuxedos, ranging from feral to friendly, young to old.  Do you have any favourites?

Posted by The Neko Files at 9:39 AM No comments: 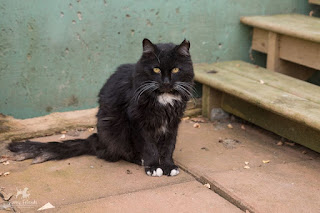 MW
A visit to the AIDS cats usually generates a certain amount of interest from the inhabitants.
The greeting committee is usually active – and usually food-motivated. Arnie and Norman tend to be anxiously hovering, and they used to be joined by Randy and Popeye – the latter two now happily adopted together.  Other cats, like Boomer, are less interested in the food and more in the attention.  Out in the courtyard there are usually suspicious eyes watching – Francis and his friends are not yet ready to be approached. And in the main cabin, there are always the more timid cats hiding on the upper levels. 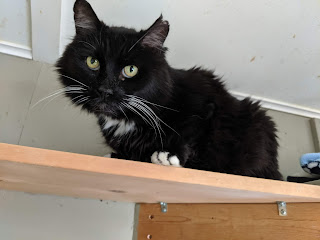 BC
If chicken is in fact on offer, there’s always one little tuxedo who dithers around on the catwalks until the lure of a treat becomes too much, and he ventures to accept a tidbit from arms-length, or to venture down the ramp to get a bit closer.
Tiberius has been with us for several years, arriving with a group of cats who had been found at Point Roberts, and trapped by VOKRA (Vancouver Orphan Kitten Rescue Association). Their excellent work is focused on rescuing and trapping young moms and kittens, and finding homes for them by means of fostering. They don’t have the facilities to deal with cats with long-term health concerns, and RAPS will often take from them the cats that need specialized care. Four of the five ferals from Point Roberts were AIDS-positive – the fifth was feral. Survival as a feral male cat inevitably involves some battles with other cats. And since the auto-immune virus is transmitted in blood, the cats who come to us from that background are more likely to carry it. 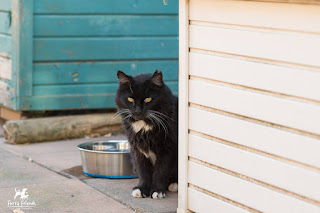 MW
Many of those unneutered males come to us with the bulk and jowly heads of a classic tom-cat. Tiberius doesn’t fit that pattern. He may simply have been under-nourished to attain full growth, but he has a slight build, and he’s skittish rather than aggressive. He’s not been a cat that can easily be approached; the upper-level cat-walks were built to allow cats to get away from us, and he has usually taken full advantage of that. For some years he was an outdoor cat by preference, and frequently acquired the matted dreadlocks of a long-haired feral, which needed to be shaved under sedation. 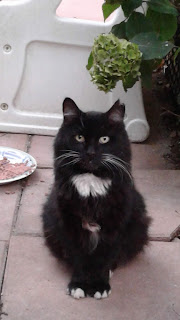 BC
In the last year or so, Tiberius has moved with more comfort between courtyard and cabin, and has now progressed to coming forward to accept tidbits from a human hand at floor-level. He is looking more relaxed and less skittish – a sudden movement will startle him, but he doesn’t go far, and with patience, he is approaching more and more easily. Inside the AIDS cabin, his preference is still for the upper shelving, but he no longer shies so quickly from the petting hand. He’s not ready to be a lap-cat like Boomer yet, but it’s very satisfying to see that he finally accepts that we’re friends and no longer to be seen as something to fear.

Inevitably, with the number of cats we have, there are name duplications – Bobbys and Sophies and Katies have come and gone.  The current replication (in different forms) is Keke – and it comes in three very different cats.
The oldest one is Kiko, who lived in the Moore House for some time. She was a pretty grumpy cat, but with much work from the Kitty Comforters, she decided that humans weren’t too bad after all.
It was felt that a bit more socializing might help, and she was transferred to Pen 6 with the Candy Cats, where she initially took up residence on a shelf and declined to come out.
The med staff kept an eye on her and made sure she was eating, and we knew she was warm and comfy there. Eventually she emerged – usually when humans were around – and demanded attention.
She doesn’t want a lot of petting, but she likes acknowledgement of her presence. With the warmer weather, she enjoys finding a sunny spot and toasting her old bones.
She doesn’t care much for the other cats, but she’ll ignore them if they leave her alone, and mostly it’s only Cadbury who can be a bit of a brat to her.
The prettiest of the three lives in the area we call Newcomers – an area that’s not open to visitors on a Sunday, and is home to many of our shyer cats.  Keilana, also known as KeKe, is a long-haired calico, and shy with both cats and humans. Her cage has been open for some time but she’s reluctant to leave its safety, and she doesn’t even like to come down to the floor for food.
She's around 13 years old, and came to us because she was not getting on with the family dog - watching her, it's pretty obvious that she's one of those cats who needs to be a One and Only.
She will interact with humans without any aggression, but it's clear that she'd rather remain at a distance until she feels secure.
KeKe (II) is a more recent arrival in the DoubleWide, coming to us as an 11 year old cat when her owner died. For a while we changed her name to Kiwi, so as not to confuse her with Keilana's pet name, but we reverted to the original sounds she knew. She has the most beautiful golden eyes.
She’s a sweet bobtail girl who is also diabetic, and the med staff are still working to stabilize her diet and insulin.  We have several diabetic cats, and because there is a degree of free-feeding, it’s really important that we monitor them carefully. Keke is wary, but friendly with visitors, and might be a possible adoptee to someone with experience in dealing with diabetes
Kiko is too old for more changes to her life, but the two KeKes are both cats who would be more comfortable in a home with someone to adore them as The Only Cat, rather than being surrounded by other felines.

Posted by The Neko Files at 7:02 AM No comments: