There are a surprising number of cats around the Sanctuary who are described as “Donni cats”. They date back about ten years or so, when a hoarding situation was brought to our attention, and the collection of cats and kittens came into our care. Their “owner” loved them dearly, but was incapable of caring for them and was forced to move.
In the years that followed, she was a regular visitor, always bringing treats, and spending time sitting among her feline family, giving them petting, grooming and much love.  Even through her final illness, she managed to make some visits, and her name is inscribed one one of the benches in the back courtyard.
Among the kittens that first came to us were two black-and-white bundles, who were named Spencer and Lucy. Both grew into solid cats, and were among a group that was adopted out about a year later. Unfortunately the adopter had just too many cats for the amount of space, and territorial wrangling led to a certain amount of peeing. Some of the cats came back to us at the Sanctuary, and among them were Spencer and Lucy.
Initially Spencer settled down well; it was Lucy who hid in fear much of the time.  Eventually it was decided to try her in a different area, and the siblings were separated. They hadn’t shown much sign of being bonded, and Lucy decided that the tea-room suited her – though she was still diffident about much human attention.
In the years since, both have become fixtures among the feline population – and frequent greeters at their respective gates. Spencer is actually the more shy of the two; he’s part of the crowd but not a cat that comes easily for petting. He enjoys it when treats are offered, but prefers not to take them from a human hand – which means that often someone like Jake will nip in and steal the tidbit!  His distinctively flecked right eye colour makes him easy to identify when snuggled in with the other darker cats in the papasan chair outside the single-wide.
Lucy has claimed the passage just beyond the gate into the back area, and is frequently found to be greeting visitors. She enjoys attention more than her brother.
Both have somewhat dense fur that really needs grooming to stay in good condition; when you put Spencer next to his buddy Lancelot, you notice the difference in appearance. He’s hard to groom, though, whereas Lucy enjoys the attention (if not the comb, so much!).  Visitors and Kitty Comforters - this is your challenge!

Cats being the hedonists they are, it’s not surprising to find them curled up in warm places. Most of the Sanctuary’s cat-cabins have ceramic heaters, and even in sub-zero temperatures the outdoor cats have somewhere warm to be. In every building around the Sanctuary there are favoured places that cats choose – mostly related to warmth. In the Tea Room, you will practically always find Sadie face-planted as close to the heater as possible. 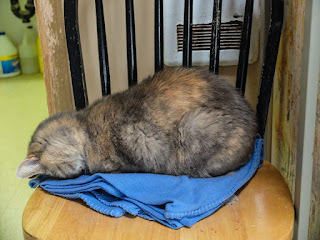 In the Double-wide, there’s usually a crowd on the table just inside the door, and another (usually focused on Salty) on the couch. Hot air rises, and there are normally a good number of cats on top of the cages in the Connor. And the papasan chair near the courtyard stairs is always good for a cuddle-puddle as is the one on the Newcomers deck. 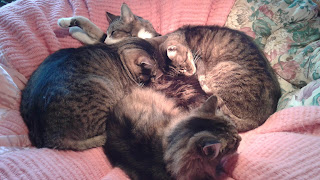 But the favoured place has to be just inside the door of the Single-wide, where, as you enter, you are usually greeted by a furry pile. 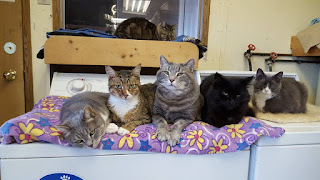 L to R: Simone, Jenny, Jarod (Yap), Bantam, Belinda, Zoe
with Little Mama up above - PH
Personalities vary, but the core of the Dryer Gang, as they are known, are usually Simone, Bantam and Chickadee. The three of them came from an egg farm (now demolished) and it’s likely they were all related – according to our vet, Simone is older than the other two, and may well be their mama. You’ll find these three on the September page of the 2017 calendar. 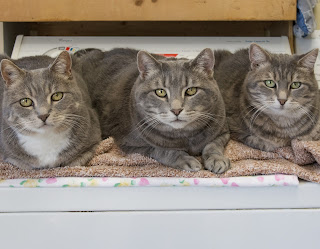 Simone is one of those cats that visitors actively seek out.  She is a cuddle-bug, liking to be held upright over a human shoulder, rather like a baby. In her earlier days she would have come under the no-semi-ferals-adoptions ban, implemented after our experience with Jenny and one or two others; now she is older, calmer, and there is a long list of people that would probably adopt her like a shot. However, as with Salty, we have to consider not only her but also all her cuddle-buddies – losing her would seriously affect the dynamic of the group.
Bantam enjoys his share of petting and cuddles, though he’s not as much in favour of being picked up as Simone is. Chickadee is shyer still, preferring that petting is restricted to the cuddle-puddle itself – it’s not so long ago that Chickadee still preferred the safety of the cage-tops
The trio is usually joined by Zoe – older than she looks, but still very active – sweet green-eyed Jenny, Little Mama, and most-recently, Diamond, who we feel is still mourning the loss of her beloved son Garfield. It’s lovely to see her settling in as part of the group, and sharing in comforting snuggles.
They, and the many other cats who join them are a delightful group who never fail to draw the attention of Sunday visitors - whether or not the dryer is operating

Posted by The Neko Files at 7:24 AM No comments:

Just as we have what I call the Garbo Cats (here and here), so we also have our share of cats who enjoy each others’ company. Sometime that’s no more than a tendency to stay in the same area; sometimes it’s obviously a family thing. For many years Mr Popularity in the Sanctuary was our beloved Mario, who attracted a large following of ferals who relaxed around him. We lost Mario to cancer a few years ago, and some of his ferals have followed him, most recently, Nellie, who I like to think about as being reunited with him at the Rainbow Bridge.
But Mario’s mantle has fallen to another gentle giant. When Salty came into the Sanctuary, he was deeply bonded with his sister Shelley, but the magic wore off, and the two now live independent lives. Shelley’s a roamer – you’ll find her all over the place. Salty, on the other hand, can usually be found in his favourite place on the double-wide couch, surrounded by a crowd of other cats.
Salty obviously gives off the pheromone that says “Love me! Trust me!” It’s not quite to the extent Mario had it – with Mario, sometimes everyone wanted to lie on him, and all you’d see of him in the cat-pile was a little orange and white fur at the bottom. Salty likes a little more space around him – but it’s often the same cats who are sharing the couch with him. Cinder is a regular occupant, as is Luigi, and Watson, who was adopted and who we will soon be hearing from, loved his cuddle-buddy.

However, the most favoured companions are Ridley, Colin and Dusty. All three are ferals, and all three have become more approachable through their association with Salty.
Ridley can be distinguished among the black cats in the cat-pile by a little patch of white on his chest.
He’s still a little wary around humans, but with a not-too-full couch, it is possible to sit with the two of them and stroke Ridley without being swatted.
Colin’s one of our all-black boys, distinguishable mainly by the elegant lynx-tips to his ears. He has become much more friendly overall; he’s usually underfoot at feeding-time, rising on his back legs to rub against the feeder and make sure he’s not overlooked. 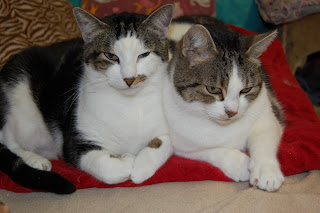 Dusty and Salty could be mistaken for litter-mates – especially now he’s put on some mid-life weight. She is very wary of human contact – especially when she’s alone – but like Ridley, petting is possible when Salty is around to give her confidence. She follows him around with adoration in her eyes.
Just occasionally, all this togetherness gets to be too much for Salty, and he has to go and sit on the top of a cat tree or in a corner somewhere where nobody else can lie on him.
A little time to himself – and then he heads back to the couch and to his adoring retinue

A Trio of Torties

For a good while now, the front courtyard has been home to just one tortoiseshell cat – Treacle, who mostly lives in the Hill House, and is beginning to show her age. Suddenly this winter, we seem to have torties everywhere we look.  In fact, there are only three newcomers in the front, but they have made their presence very evident.
KitKat came to us in the fall when the Sanctuary was a temporary home to some of the shelter cats while their regular home was undergoing remediation and renovation. She had been surrendered by her family for peeing – probably in a stress situation – and then at the Five Road Shelter she showed herself to be friendly enough, but was obviously stressed by the number of other cats, and, as so many of them do, expressed her feelings once again with her pee. When the time came to return her to the Shelter it was decided that the space we could offer her would be altogether preferable, though she would not be so obviously an adoption candidate.
A short period of being penned was followed by a front courtyard release, and a successful one – KitKat has made herself very much at home. Like many other torties, she’s not a big fan of other cats, but she mostly ignores them, preferring the company of humans, especially if they allow her to climb on their shoulders.  We think that this friendly girl might make a good candidate for the adoption list, especially if she goes to a home where she is the one-and-only, and is unstressed by other four-legged company.
Blaze and Toes came to us together from another rescue in the Interior of BC. The siblings had been trapped as young ferals with a group of cats, and were recognized as a bonded pair. As many of our visitors know, ferals can turn the corner and become very friendly. Blaze made the jump, but Toes never really did, preferring to steer clear of humans. Their family finally returned them to the original rescue, who were unable to find somewhere the two of them could be together. We have occasionally taken in cats from this rescue (most recently in a tragic situation with a hoarder who died) and it was felt that this pair might have a chance of settling with us.
After a short stay in the big cage in the Hill House, the two were released, and very quickly made themselves at home. Blaze takes her name from the marking on her face – less defined than KitKat’s very clear stripe.
Toes is darker, but as her name implies, her blond toes quickly identify her. Both are most active (and interactive with humans) in the evening at feeding time; Blaze quickly comes for petting while Toes hovers at arms-reach.
Both have established themselves in one of the feral areas (the room with the yellow door), but they also enjoy being tucked away in the gazebo in the middle of the courtyard. Recently Toes took her gazebo passion to new heights.
Time will tell if the confidence of other former-ferals will have an effect on Toes’ shyness, or if a feral-savvy home could be found eventually for these two sweet girls together.