Beautiful – but approach with caution! 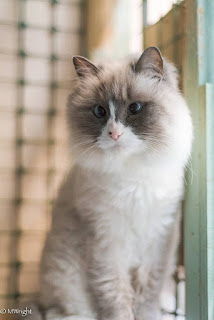 MW
Like so many cats, Jobie came to us because of peeing problems. It’s likely that she was always highly-strung, but added stresses tipped things over the edge for this poor girl.
She was a gift to the owner from a friend, and we don’t know what the background was.  Ragdoll cats are frequently very cuddly – typically they go limp when picked up. Jobie was not hardwired for this; being picked up or petted was not a happy experience for her and she acted out with aggression and peeing. It’s quite possible that she was mishandled at some point, and many owners don’t know how to give a nervous cat the time and space to come to terms with their surroundings. The final straw was the arrival of a baby in the household; the peeing and swatting became too much, and Jobie found herself living at the Sanctuary. 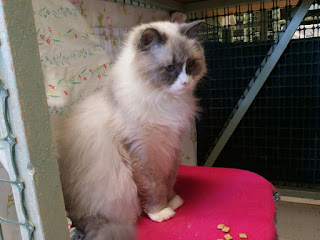 CP
Like all new cats, Jobie was given her own large cage in which to come to terms with the fact that life had changed.  Initially she spent a lot of her time in her carrier, hidden from sight, but finally emerged and showed us her not-so-sunny disposition.  Her cage was the first in the double-wide, with a lot of traffic, human and feline, passing by; we shielded her cage with a drape to give her some privacy. 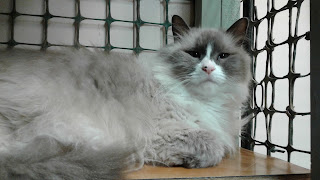 BC
Eventually we felt she was as ready as she could be, and opened the cage up. Jobie was NOT happy; this was her space, and she didn’t want any of these other cats coming into it! She rarely came out, and when she did, it was usually in order to find another corner where she wouldn’t be bothered. She would accept human attention with wariness, growls and swats; the Kitty Comforters spent regular time with her, but always very carefully. 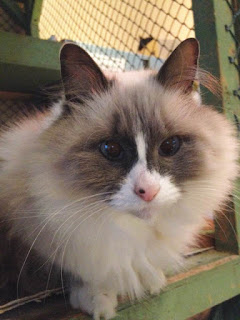 CarolP
It became obvious that she wasn’t happy, so we tried a move, and shifted her to one of the cages in the Tea-Room. Here she found there was less traffic, occasional human attention, but quite a lot more quietness. When that cage was opened, it was clear that the location shift was a good one for her; though there are still growls and swats, she is more accepting of attention, and has now started to investigate the gardens (though she still doesn’t like to use the cat-door, preferring instead to wait for a human servant). 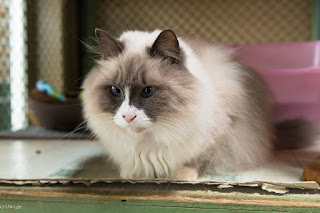 MW
I don’t think we’ll ever make a happy camper of Jobie – she has the typical Grumpy Cat outlook on life. But she’s gradually reconciling to her new situation, and even tolerating the occasional cat that trespasses in her space.

Email ThisBlogThis!Share to TwitterShare to FacebookShare to Pinterest
Labels: Jobie

This sweet little Persian lived happily with her human owner until the latter suddenly passed away. The person who came to clean out the townhouse unfortunately left a window open, and Gracie-Mae got out. She was a very shy girl, used to being an indoor cat, and an only cat with a single human.  Having got out, she was too terrified to approach people, and had no experience of living in the wild. 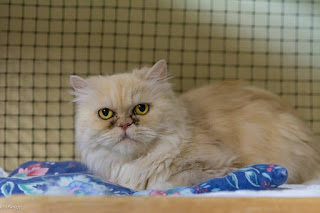 MW
Gracie-Mae is still very wary, and prefers to stay in her own space, but she’s now starting to warm up to visitors, and to stand up for herself to feline interlopers in her cage.  She’s about 12 years old, so a senior in cat terms, but she still has good years in front of her, and we hope that someone knowledgeable in dealing with a shy cat might befriend her and some day take her to a new home.

Update:
Gracie Mae has been adopted to a loving quiet home!  Happy life, little one!

Email ThisBlogThis!Share to TwitterShare to FacebookShare to Pinterest
Labels: Gracie-Mae

I think most of our volunteers would agree that we can deal with any amount of scooping poop, mopping up throw-up, washing stinky bedding, and so on – the hardest thing at the Sanctuary is when we lose a cat. Sometimes it comes out of the blue; sometimes we know it’s coming – whichever, it always hurts. And for those of us that love the leukemia cats, we know that it’s inevitable – we keep them happy and healthy as long as we can, but the virus is hard on their systems. But losing a cat very often means that we have space to welcome a new one, to give it attention, and reassure it that it will be cared for by loving hands.
Bibi and the cat we think was possibly her mother, Brenda, came to us at the Five Road Shelter as strays, trapped and brought to us by a Richmond resident. Both girls were filthy – infested with fleas, anaemic and emaciated – and the older one had deformed paws and no bladder control. When tested, it was found that Bibi was FeLV-positive, and she was transferred to the Sanctuary. Unfortunately Brenda’s condition didn’t improve and her prognosis was poor, so sadly the Shelter staff had to have her put down.
While at the Shelter, Bibi was terrified; she cowered in her cage and never felt comfortable enough to lift her head or explore. Within a few weeks of being with us she was peeping out from behind her drape, and accepting treats (though she would quickly vanish behind the drape again!)
When she was finally released into the room, Bibi decided discretion was the better part of valour, and she went to ground in the little space between the armchair and the cage. Well-meaning volunteers set up her own little feeding station, but that just encouraged her to continue hiding.  In fact, when the treat offered is tempting enough (chicken is favoured), Bibi is quite happy to emerge and be served – she’s just a little wary of some of the larger cats.
The vacated cage was quickly allocated to another new resident. Eva came to us from another shelter.  She had been diagnosed FeLV, and her family had other cats and were unable to keep her separate. Because leukemia is transmitted in saliva, you either need to have ALL leukemia cats or NO leukemia cats – unlike FIV (Feline Aids) cats, who can live happily with FIV-negative cats as long as the cats get on and don’t fight.
Eva quickly endeared herself to the volunteers, but is obviously not entirely happy with us – Merlin and Dexter are alpha males who like things to go their way, and she does not appreciate their company! She likes to have her own space, with a little human attention –  like our late and beloved Yoda, I find she’s another of those cats who likes to sit behind me and play with my hair. Visitors are encouraged to spend time with her; she’s not really food-motivated, but a little conversation and gentle petting makes her feel much better about life at the Sanctuary.


Blog by Brigid Coult (with contribution from Julie Desgroseillers)
Photos by Brigid Coult, Phaedra Hardman and Michele Wright
Posted by The Neko Files at 10:01 AM No comments:

From the Neko-blog founder, Claire, we’ve had an introduction and update to shy orange Tricia, in the double-wide – Tricia used to have to be backed into a corner in order to be reminded that petting felt quite good. She was named for a RAPS supporter who fell in love with her when the little feral first came to us.
Tricia didn’t come alone – she was accompanied by her sister, Tara, named for her sponsor’s sister. We’ve had no such taming luck with little sister Tara. This pretty girl hangs round pen 1; she’s fairly social with the other cats, especially her best buddy Gabby, but she feels that humans are still not to be trusted.

Tara was caged for a couple of months recently while we treated her for a bout of vestibular disease. Often the process of caging a cat gives us the opportunity to swing the kitty comforters into action and habituate a shy feline to more regular handling. It didn’t work this time. Tara regarded all intruders into her cage with horror, and once released, returned to her haunts around pen 1.
But things aren’t quite the same – now she is more inclined to hover just out of reach, allowing the human to approach just to touching range before scuttling another metre away and then turning to stare. She now sports the distinctive post-vestibular head-tilt, as does her pen-mate Tibet – and she has the same half-scared, half-fascinated attitude to people. Tibet now has his favourites with whom to interact; we really hope that Tara will make that final jump to trusting us. 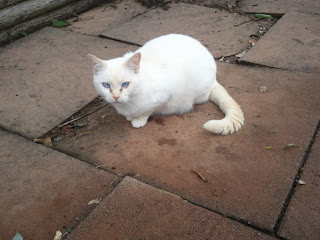