Visitors to the Sanctuary are regularly greeted at the door of the Single-wide by a furry puddle of cats on top of the drier. They love the attention they always get there – after all, what’s not to like about getting the first chance at treats! – and most of all, they love the warmth and the vibration when the drier is on.
Certain cats can usually be found there.  Simone is always a favourite, and normally she and Bantam, who is probably her sibling, anchor the pile. They’re usually joined by Chrissy or Jenny, and sometimes by Bonnie Boy. But there’s usually another little grey cat in the cuddle-puddle, and she deserves an introduction too. 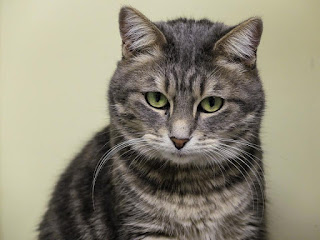 We think Chickadee came to us from an egg-farm on Blundell – Lisa trapped ten ferals there when the property was sold and slated for demolition. She is similar in appearance to Simone and is sometimes mistaken for her.  She might well come from the same litter as the Simone and Bantam – we don’t always know, when ferals are brought in, what their family relationships may be.
When the dryer gets going, you occasionally find cats totally blissed out on the warmth. Chickadee can be so relaxed that her tongue peeps out. 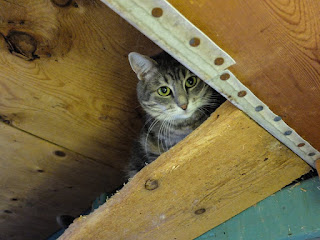 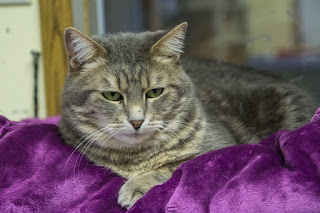 She may be wary of humans, but she has lots of feline friends she likes to snuggle with, and who can show her that being handled really isn't so scary. We have a number of cats that have gone from being wary and shy to being shameless in soliciting attention. Let’s hope Chickadee follows Bantam and Simone’s great example!

When visitors arrive on a Sunday afternoon, at some stage they almost inevitably look round at all the front courtyard cats, and ask about adoptable cats. And our answer is usually the same: our adoptable cats can be found at the No 5 Road Shelter, and the majority of the Sanctuary cats are non-adoptable. But as I wrote in a recent 5-part series, there are actually several cats who are adoptable, and who aren’t at No 5 Road Shelter for a variety of reasons. This is the beginning of a series featuring some of those cats. 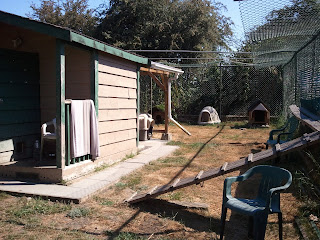 The 5 Road Pen
Back about five years ago there was a sudden influx of adoptable cats to the Shelter, and staff had to make hard decisions about cats that had been there for a while without adoption prospects. A bunch of cats were moved to the Sanctuary and placed in what was then called Packers Pen – at that time the home of the remaining cats which had been trapped at the former Steveston Packers site. The resident group was aging – and in fact, in the years following, they all passed on. The 5 Road cats settled in well – there seemed to be a truce between the residents and the newcomers – and within a few years it was known to volunteers as the 5 Road Pen. Since then, we have been able to return a few of these cats to the Shelter for adoption – but there is still a core group remaining. 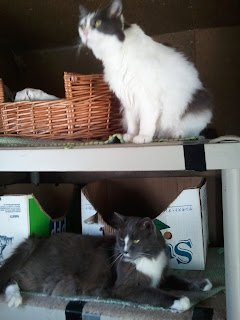 Adam and May are part of that core group. Both have been featured in the Neko Blog individually, but it is apparent to us that they are a bonded pair – they’re comfortable around other cats, and willing to explore independently, but they are happiest together, and often found cuddling in the same bed. 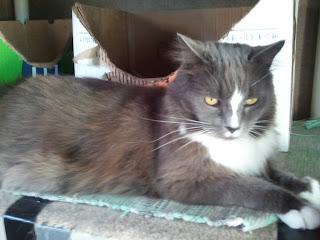 Adam is a calm presence in the pen. For some time cats were not thought to be the same sort of social species that dogs are, for instance. But studies have shown that there are very definitely social hierarchies among cats, and they can be most clearly seen in the way that cats rub against each other – the highest ranking cat is the one that other cats come to rub against most often.  Adam is definitely a rub-ee rather than a rub-er.  He can often be found lying right by the gate on a Sunday afternoon, waiting for visitors to arrive with treats. 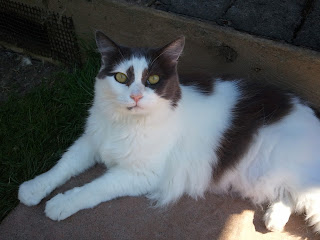 May is shyer with visitors, but friendly and approachable once she has decided to trust. Her distinctive markings attract attention 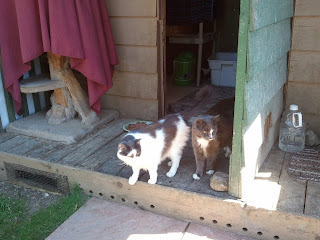 It would be wonderful if this pair could go to a good home together. Individually they would probably be fine, but the upheaval of a move would be made much easier by each other's presence. We usually tell new adopters that if you adopt one kitten, you’d be better to take two, to entertain each other. With adult cats, that’s sometimes harder – established personalities don’t always mesh well. But Adam and May would settle into home life together without any trouble – and we’d love to see it happen!


Blog and pictures by Brigid Coult

Email ThisBlogThis!Share to TwitterShare to FacebookShare to Pinterest
Labels: Adam, May

Nine-year old Koi, a chubby calico and white girl, was surrendered to RAPS’ City Shelter in early 2014 and transferred to the Moore Trailer at the Cat Sanctuary about a year later.  Presumably, Koi was given her name because she has a koi-fish shape and colouring and sometimes has a slightly fish-like vacant look about her. [Phaedra disagrees: “She’s not vacant; she just wants to be loved and made to feel special!”] 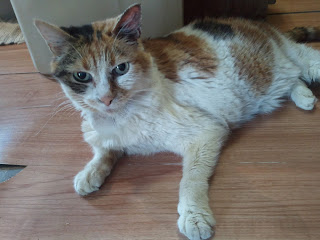 She was surrendered by owners who were no longer able to look after her without risking injury to themselves or to Koi.  You see, Koi has an unfortunate habit of following closely (very closely!) behind you and than parking her rather large self on the floor right behind your feet. It’s tricky enough for a nimble person to avoid turning around and falling over, or on top of, a cat disguised as a small footstool but it’s a definite health hazard for anyone not quite so steady on their feet. 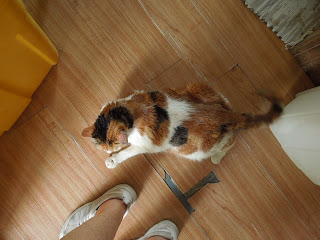 Once settled in her chosen spot, either snugged up to your heels or against a door that you’re trying to open, Koi doesn’t take kindly to being moved.  Any attempt to do so will be met with resistance and an irritated little growl. She may have some neurological issues or maybe she’s just very insecure and wants to be close enough for company and attention. She likes to be talked to and stroked. 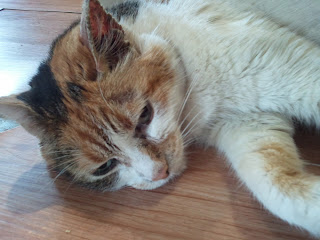 Fortunately for everyone’s safety, Phaedra discovered that, if a comfy bit of bedding is placed on the floor for her, Koi will settle down on it instead of parking herself in harm’s way. Her favourite spots are in front of the kittens’ room, or by the screen door where she can feel the breeze Not totally successful, but worth a try to avoid too many unhappy accidents. 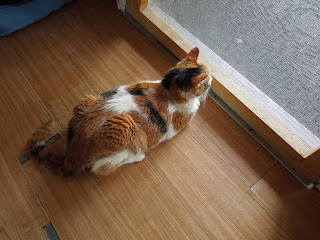 Whatever the reason for her odd habits, Koi is a very special lovable cat who wants company, and doesn’t seem to share the same diva-like personality of most of her roommates in the Moore trailer.

At Large No More

For several years, Sunday visitors to the Sanctuary have entered, anxious to report that we have escaped cats in the parking lot, and needing to be reassured that yes, we did know those cats were out.

The two “strays” were Jordy (brown tabby) and Schatze (torby). Both had been taken in to the Sanctuary and for various reasons they never settled. Jordy made his home-base in handyman Doug’s work-shed; Schatze hung out mostly under the Moore House.  Staff kept an eye on both, necessitating the occasional capture and vet-visit, but both were so unhappy and so quick to escape, that they were just accepted as the outside cats. 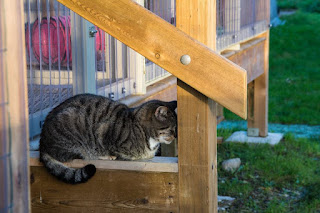 Jordy
On his last vet visit Jordy was diagnosed with a heart condition, and his outside feedings soon included medication, which he accepted happily. And then recently he vanished – we hope he just found a hiding place and passed away quietly. Schatze, deprived of her parking-lot buddy, was more active and vocal, and the decision was made that, like it or not, she should come in. We’re situated on agricultural land, and the inevitable predators are a danger to even a savvy cat like Schatze. 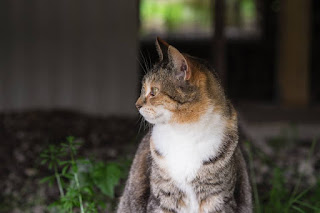 Schatze
So she came into the Moore House for a while, caged, to try to settle her, and there was discussion about where she should go – should she stay in the Moore House where she could see out to the area she used to hunt? Or should she go somewhere else?
In the end the decision was made that she needed space more than she needed visual familiarity, and last week she was released into pen 4, one of the feral-cat pens at the back. It’s a spacious pen, totally fenced in and covered, and the other cats in it – who include OJ, Rusty and Sandy & Pebble – all seem to get along peaceably. They get Kitty Comforters in from time to time, and many of the cats are more accepting of human attention than they used to be. 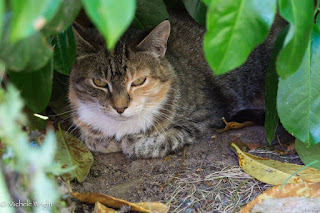 ﻿
For the first few days in the new pen, Schatze sulked; she found herself a corner under a bush and stayed there. Staff and volunteers visited her, and made sure she had food, water and attention. On Friday Michele went in to try to get some pictures, and Schatze emerged to do a little exploring. The following day I visited and was greeted by the familiar chirping, and a little cat looking for her favourite treats. 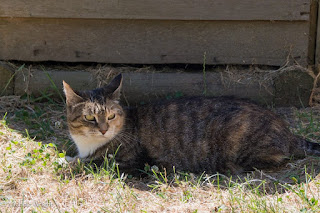 Time will tell whether Schatze will settle or will pull a Houdini – we hope she realises she really has it good in there!


Blog by Brigid Coult
Photos by Michele Wright
Note: Schatz/Schatze/Schatzi is a German term of endearment for a girlfriend - treasure, sweetheart.  People spell her name a variety of ways; I've left the spelling as in Claire's original posting.
Posted by The Neko Files at 6:22 AM 1 comment: