When new cats come in at the City Shelter – either as surrenders or as trapped cats – one of the first things that happens is a quick trip to the vet for a checkup.  Blood testing comes first, a spay/neuter if necessary, and then a decision about where the cat will go.  For a cat that has spent any time in the wild, one of the dangers is always that they may have contracted feline leukemia virus (FeLV), and if that is the case, we are just thankful they have come to us at RAPS. FeLV is transmitted in saliva, and is dangerous to the immune systems of other cats; our own FeLV cats live in an area separated from the general population, both so that we can ensure that nothing in their saliva can contaminate anything the other cats touch, and also so that we can keep their area as safe as can be from anything that might affect their fragile immune systems.
Many other shelters and sanctuaries are unable to create this dedicated area, and it is a sad fact that a cat infected with FeLV is more likely to be euthanized because it’s considered unadoptable. Of course, is is possible to have a FeLV cat at home, but only knowing that it should never go out, never be in touch with an uninfected cat, and knowing that its life-span is likely to be much shorter than usual. Faced with that, most people shy away from the commitment. 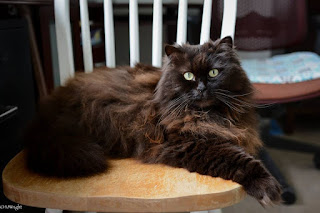 RAPS is dedicated to a no-kill philosophy, and leukemia cats coming to us mostly live in what we call the “Old Aids” area, now extended to the Val Jones corner.  For some time there has also been a Leukemia room tucked away at the back of the Single-Wide, but with the death of our lovely Harry, the population there was reduced to two cats, and the decision was made to transfer them over to the Val Jones area, where we have also lost Jerry, Foxy and GusGus in the last six months.
Smoochie was trapped and brought to us some four years ago; the family that found him would have kept him, but for the FeLV diagnosis. His tidy black-and-white and little Charlie Chaplin 'tache disguises a very shy boy; he was pretty scared when he arrived; it’s taken a long time to get to the point where he will comfortably accept petting, and I suspect it was Harry that taught him that humans could be trusted to give good cuddles!  He’s still shy, but now he looks for his favourite people, knowing that he’s safe with them.
Bear was one of two cats surrendered together at the City Shelter; it turned out that he tested positive but his housemate was negative, and the two were split up, with Bear coming to us at the Sanctuary. “Shy” is not a word to describe Bear; he is pretty vocal, not really cuddly, but ready to throw his weight around when needed.
Moving the two of them to the Val Jones corner was much as expected; Smoochie found corners to hide in and had to be coaxed out; Bear swaggered around with lots of confidence. Their pen-mates are Mocha, Suga, Henrik and blind Chip, and all seem to have settled well with the newcomers.


Blog by Brigid Coult
Photos by Debbie Wolanski and Michele Wright
Posted by The Neko Files at 10:48 AM