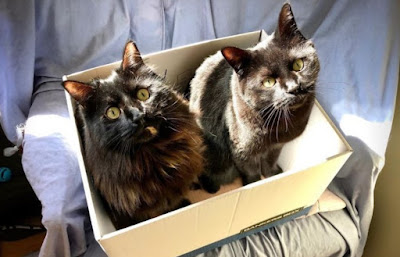 Domino & Banshee - JK
Most of the Moore House cats are too senior to do anything as undignified as running and playing.  And yet, in the last few months, one could often hear the sound of kitty feet running around or toys being pushed across the floor. Wasn’t it supposed to be quiet in there? 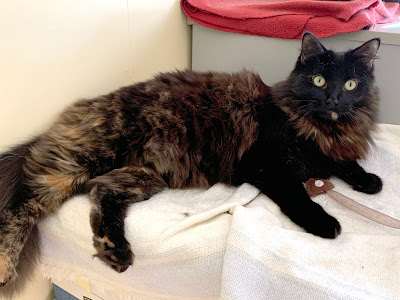 Domino - PC
Not while Domino and Banshee were around!  This pair of young cats have been in foster care with a volunteer for a year, followed by a few months in the Moore’s side room,   They just celebrated their first birthday in August.  Domino and Banshee were part of the massive group of black cats that had been trapped in Richmond a year ago.  While most of their siblings and relatives were adopted out, they remained behind because they tested positive for Feline Leukemia. Looking at their high activity levels, you’d never know they have FeLV.  After several confirmation tests, they have now joined the other FeLV cats in the private playground. 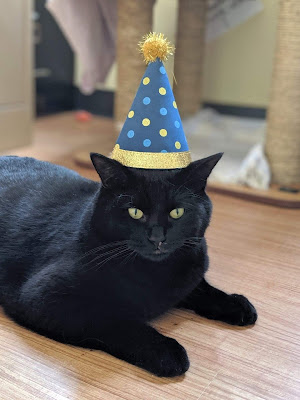 Banshee birthday-boy - LBF
Big, handsome Banshee loves to chase balls around the room.  Just toss a toy and watch him go.  Despite the name, he’s not a screamer (thankfully).  He’s the bigger cuddler of the two. Banshee takes a bit of warming up, or he’ll hide beneath the chair.  Once he approves, he’ll come over for pets and leg rubs.  Oddly enough, he doesn’t mind being held.  Banshee has a funny light coloured spot on his nose, which looks like a permanent booger.  He also has a knack for sitting on his toys and blocking the door to stop you from leaving. 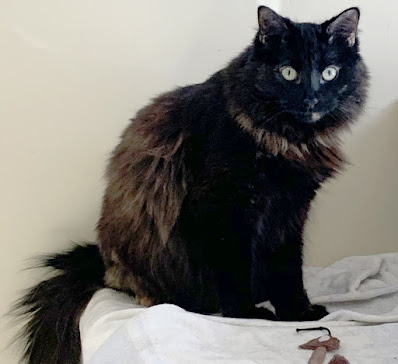 Domino - PC
Fluffy girl Domino spends her time in the cat tree, on the filing cabinet, or any high place.  She enjoys all types of toys and things that look like toys.  Domino is notorious for destroying anything stringy.  If you have hoodie strings or loose shoelaces, she’ll turn those into playthings, as well.  She plays hard.  She likes rough petting, too.  But she dislikes sharing.  And that’s when the tortitude comes out!  Domino makes chasing her brother a hobby. 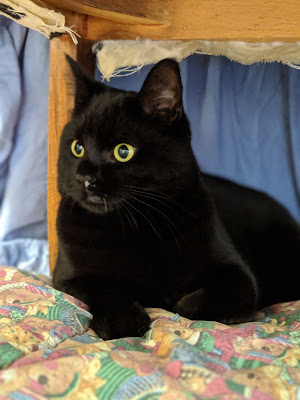 Banshee - LBF
She and her brother are both shoulder cats.  They will not hesitate to leap onto your shoulders when you’re in range.  It’s fun, unless you’re cleaning, then it increases the challenge.  When there are no humans present, the pair will either play or bird watch. 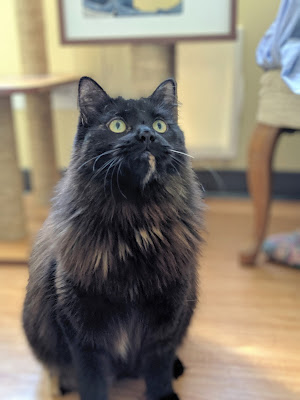 Domino - ready to jump - LBF
Now they’re in the FeLV area, there are plenty of things to explore, places to play, and cats to interact with.  At a year old, they are the youngest of the group.  With their bold personalities, they’re competing with Dexter, Bear, and Smoochie for attention.  Volunteers will have the advantage of being able to sit down in a chair with them and relax or to watch their antics.  Domino and Banshee will have fun in the courtyard section of the pen, where the back area offers the biggest bird watching window ever! 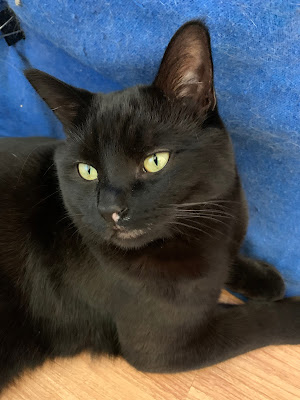 We would love these two sweethearts to find a home – whether permanently or in fosterage. The biggest condition is that they should never come into contact with non-FeLV cats; the usual RAPS rule of “keep them as indoor cats” is an even more vital one than usual. Having leukemia cats is not for everyone – but potential adopters should know that the virus is not not contagious to anyone other than another cat, and it doesn’t necessarily mean a shortened life-span – we’ve only recently had to say farewell to old Ooly at the respectable age of 18, and she’d lived with us for more than ten years. Banshee and Domino are an energetic loving pair of siblings who will be happy with us – but who would be even happier with their own humans to give them constant attention. 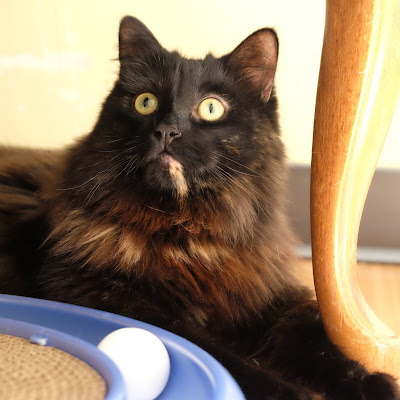 STOP PRESS!  As this gets ready for the electronic equivalent of going to print, we have the exciting news that Banshee and Domino are in fact being adopted, and will very soon be going to their furever home - not to a volunteer, as is often the case, but to outside adopters who heard about them, met them and fell in love. It is so exciting to know that we have people who understand the challenges posed by Feline Leukemia, and are ready to face them and adopt anyway.
Good luck, little ones - live long and prospurrr.....   💕