Emery is a three year old tabby Manx. He was adopted twice, the first time as a kitten, and brought back for peeing. I believe his second home was a place where he could be the only pet, but it ultimately didn't stop the problem of inappropriate urination. And so he'll now be living at the sanctuary. 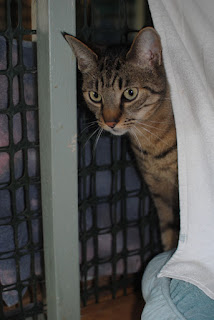 It's easy to see why people would want to try to make it work having Emery in their home, as he clearly loves people. He was behind the drape in his cage when I went to introduce myself this evening, but I only had to say hello for him to pop out to greet me and generally be fussed over. 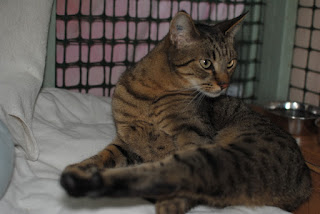 Ann mentioned that he's not been so big on the idea of other cats, particularly on first arrival at the sanctuary. By the time I met him a few days later, though, he'd at least got to the point where other cats could walk by his cage without him taking exception.

One thing he does like is cat grass. There was a nice little box of it in his cage that, once spotted, so totally captured his heart that there was no room left for me until he'd had his fill. I had to leave him to it and come back later to resume our get-to-know-you cuddles. 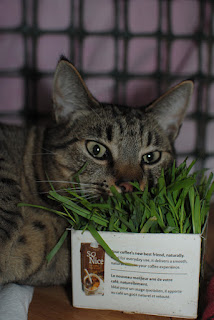 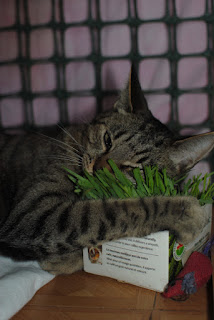