Sam’s only been with us a short while, but much personality has emerged!  His elderly owners had to move to senior care, and were able to take him with them, but when first one and then the other began to be unwell and unable to care for him, the family arranged to have him come to RAPS.

In the Adoption Centre, Sam was not a happy camper.  For a cat who had obviously been the centre of the household, with free rein to get to into anything he wanted, it was a shock.  Other cats?  Horrors!  A cage?  How dare they!  Sam was alternately closed down, and very angry. It doesn’t help that he’s not a small cat, and the Adoption Centre cages must have felt a bit claustrophobic.  The staff decided to move him across to the Sanctuary, where the cages are much larger, and though there are more cats, there is also more space.After a short stay in a Sanctuary cage, we were able to release Sam into the Front Courtyard – usually one of the delays in releasing a cat is in order to make sure that they are fully vaccinated, and since we had Sam’s records, that wasn’t an issue.  We left him with his collar on as a signal to weekend visitors that he’s a bit temperamental, though we’re already seeing that he is calmer than when he came in. 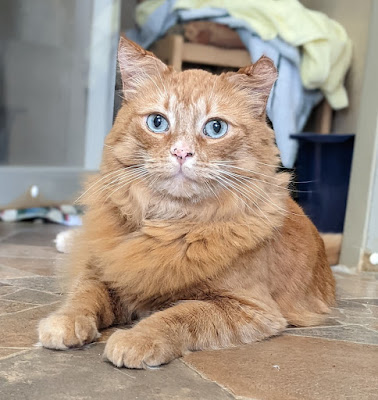 LBF
Orange tabbies usually have golden or green eyes – it’s unusual to have a blue-eyed-boy with that colouring. His ears are often flat, but that’s more suspicion of other cats than anything – when he’s relaxed and happy they perk right up.  He likes human attention in a limited way;  we need to watch him around visitors because he tends to roll over and show his belly – and, as with many cats, it’s a trap! But he’s also discovered that when he’s had enough, he can go and chill out in the Hill House, which is off-limits to visitors.Sam is not an unadoptable cat, like so many of the other Sanctuary residents. But we won’t let him go to just anybody – he needs to be a one-and-only cat, he needs a cat-savvy adopter who will read his body language and react accordingly, and he needs someone that he can love.

We won’t offer you green eggs and ham, sweet boy, but much love until it’s time for you to move on to your own home. For the pleasure of your company, thank you, thank you, Sam-I-am!