RAPS was asked to come and trap Autumn and her 4- to 5-month-old kittens, who'd been living on the grounds of a composting facility on No. 8 Rd. in Richmond. If I understand correctly, I believe they'd been holed up in a brick pile.

None of the staff at the facility were aware of anyone having handled the kittens, and so they were presumed to be wild. Thinking them too old at this point to be easily tamable, Carol began trapping the kittens and bringing them to the sanctuary where they can safely live out their wild lives... only it's turned out that they're not so wild after all.

The four kittens who've been brought to the sanctuary so far are hardly the hissy hiders that one would expect feral kittens to be. Instead, they're playful, wide-eyed and curious about their surroundings, human inhabitants and all. It seems that someone must have spent at least some time with them after all. And so they'll be able to go to the No. 5 Rd. shelter for adoption.


With their mama, Autumn, it's harder to tell if she's feral or a frightened stray. Fortunately, at the sanctuary she can take as much time as she needs to decide if she's interested in accepting any human friends. 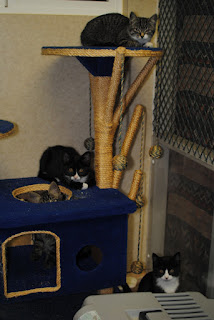