As we approach the Family Day weekend, I thought I’d take a look at some of the feline families that constitute the Sanctuary inhabitants.
Because so many come in as ferals, we can’t always be sure about which cats are related – but family is family – through blood or through bonds of affection.
Some of last week’s blog cats are obviously family by blood – Mozart, Pistachio and Caleb have clear family resemblance. Their “teen” buddies, Leo and Benny are bonded, but not genetically related to each other or to the first three; however all are obviously “family” to each other.
This past summer, we had a major trapping operation when a feral colony was suddenly discovered, with kittens and pregnant moms everywhere. All the kittens have been adopted, but we’re working on getting the young adults comfortable with us.  Pen 6 is now home to a colony of shy teens, and the Kitty Comforters are making slow but steady progress in coaxing them to accept attention.

Two big black fuzzies are probably the baby-daddies to a number of the adopted kittens. Zeus and Pax now live in the Val Jones area with the other friendly FIV+ cats. Both have settled well, and may well have been strays rather than feral; however, an un-neutered cat is anxious to roam and find a female, and fighting males can easily pass FIV to each other in bites.


One small family has joined us from Kamloops. Outside the city boundaries, another feral colony grew out of control. Private rescuers have been going in and trapping, and shelters in many places have been stepping up and taking in the less adoptable cats. We accepted Baxter, Bruley, Barbara and Ariel – knowing that the first three had a respiratory virus and would need careful tending. They have done well, and are now part of the Double-Wide population, and reunited with Ariel. Barbara is particularly loved by many volunteers; she has something of the chromosomal disorder that marked our beloved Daisy. 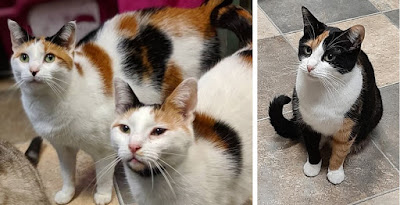 Honeydew, Melon, Kiwi - KN/LL
The three calico cats in the Connor House are obviously sisters; Melon, Honeydew and Kiwi all seem to enjoy each others’ company.  We don’t know whether their “brother” Shiver is related by blood – his appearance is nothing like the others. But more than one male cat can mate with a female, and it’s possible that in one litter you can have kittens that look radically different from each other, because half their genes are from another source.
Without genetic linkage, there are cats that move together to make clear “families” - sometimes of semi-bonded pairs, sometimes just of individuals that like each other. Samantha likes to have “her boys” around – she is most often found snuggling with Chimo (who still misses his beloved PawPaw), but loves to be with Eclipse, and now Winston is often in the vicinity.

Little Barbara (above) has made herself at home on the DoubleWide deck with the feral boys - Luke, Bodhi and Hamlet are unrelated but bonded, and now they have a little adopted sister.
Cats often have a reputation as loners, but at the Sanctuary we also see how important family can be to them.