There are certain areas where you can usually meet certain cats.  Jamie is a boundary cat! 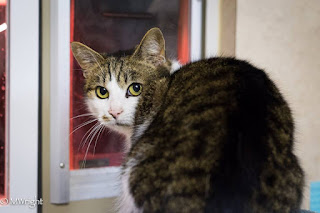 MW
The Hill House is something of a cat co-op, with lots of beds and plenty of shared space. Often you can go straight to a specific bed when you want to find Faline, for instance, and Treacle always had her own little corner. Other cats will migrate from bed to bed, and there is often a puddle of mutual adoration on the top of the trolley that divides the room. 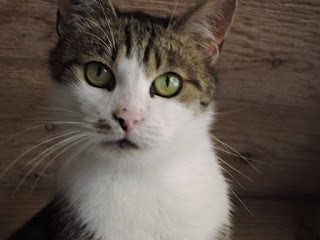 MD
The trolley also abuts the window into what we call the Old Rabbit Area (it’s a long time since there were any rabbits there!) which is usually the home for the feral cats. In contrast to the open beds in the Hill House, this area has all its shelves draped with sheets in the summer and with blankets in the winter, so that timid or shy cats can find a space to hide. 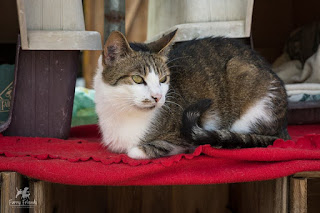 MW
Jamie can’t quite make up his mind where he belongs. Sometimes he’s tucked in a basket with the other ferals, other times he’s rubbing and bunting and purring with the other cats in the Hill House – especially when food is in the offing.  For some time he’s been a very shy cat, but the last year or so has seen great progress, and Jamie has some devoted human fans who always spend time with him. 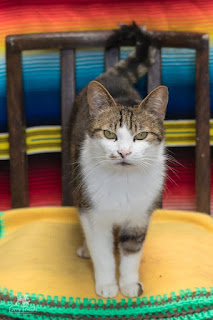 MW
Leslie tells me that he came to the Sanctuary in 2008 when Carol Reichert trapped a mama cat, who was named Caroline, and her three babies. Mama-cat disapproved of the whole thing, and excavated her way out via a vent in the Hill House (which has since been securely blocked). Two of the three kittens were recovered, but Caroline and baby III made a clean getaway. 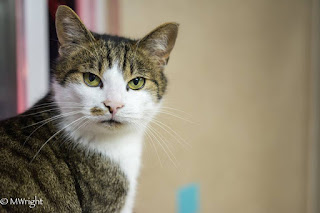 MW
Jamie was named for Leslie’s daughter Jaime, and initially it was thought he was a she, but the inevitable vet-check straightened that out and the spelling was adjusted.  Jamie’s sister is the pretty little grey and white Janine, who was featured in the 2015 calendar.

The love-puddle in the Hill House is usually led by ginger boy Daniel, who seems to be very popular. A variety of other cats get into it – tabby Cloverleaf, black Shady, grey Sarah. But Jamie is always there in the middle of the action, and accepts caresses from cats and humans alike with great enthusiasm.

Blog by Brigid Coult
Photos by Melanie Draper and Michele Wright; video by Carol Porteous
Posted by The Neko Files at 12:04 PM