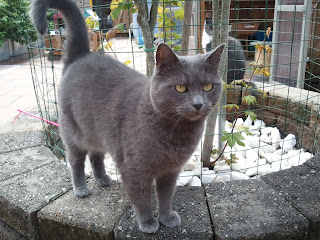 On Sunday afternoons, many of the visitors that come in bring treats for the cats, and in fact some of our furry friends are so blasé about food by the end of the day that we have to restrict the canned food we put out. Rather than commercial dry treats, I prefer to have a little bag of chicken bits in my pocket, and before I leave, they get shared around.  Many of the cats love chicken more than anything – “chickaholics”, I call them – and they’re desperate to get their share. Cheetah and Jake lead the charge, but Paulo and Latte are right there, Tommy and Dirky, shy Gilbert and Diamond, and many others. 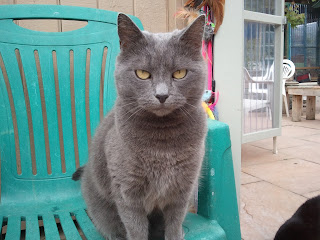 Often I will hear a little chirp from behind me, and find a small grey cat hopping from one foot to another in anticipation. For some time I didn’t know her name, until Leslie identified her for me as PETUNIA. It turns out she’s one of the egg-farm cats in the single-wide – from the crowd that includes April and Simone and Bantam, and she is probably a litter-mate to more than one of them.  At some stage she made a dash for the door and established herself in the front courtyard. 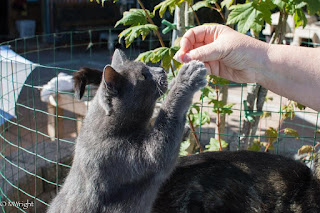 She’s a shy girl – she won’t allow more than the slightest touch – but is more than ready to take chicken from the hand. But the fact that she’s so food-motivated makes it more likely that the Kitty Comforters will eventually be able to tame her a bit more, and she certainly sees that there are good things that come from being around humans. 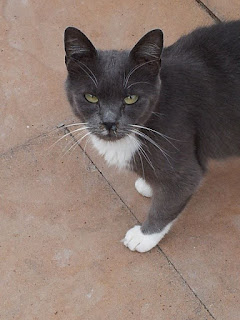 Another grey girl occasionally in the chicken crowd is SARAH. It’s interesting to me that Sarah actually used to be more active in the cat-crowd, and around people, and has now taken to hiding away in the feral cat area.  She is also very keen on chicken, and had no hesitation in swatting another cat out of the way if she thinks she can get away with it. 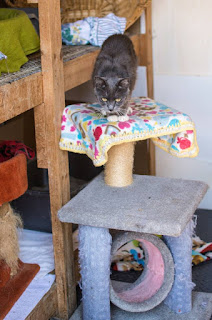 Sarah was one of a group of cats brought to us by volunteer Mary He from a feeding site she tended – others in that family included Fern, Fabio and Cyrano.  It may be that Sarah’s withdrawal from a more active courtyard life is part of staying connected with her “family” who also inhabit the feral area.  She’s still a very wary cat, and like Petunia, she shies from fingers that don’t hold food, but I think she’s another cat that, with a bit of work, could become more comfortable with humans. 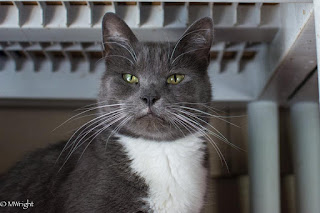