Spitz has come a long way since she arrived at the RAPS No. 5 Rd. shelter as a feral kitten. 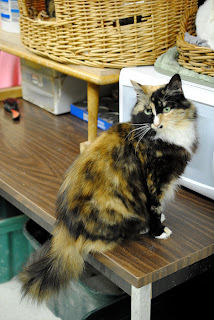 Scared of people and given to lashing out in response, Spitz couldn't be adopted out as a youngster. Instead, she was brought to the cat sanctuary where she could have a safe place to live without being obliged to have more contact with humans than she was comfortable with.

Spitz later got past feeling so threatened she had to lash out at people, and she opted to switch to simple avoidance tactics. She would allow staff to catch her if necessary, but vastly preferred to watch human activities from a safe place.

More recently, Leslie says in the last year or so, Spitz has become much more comfortable with people -- so much so that when I met her on Monday, I had no idea that she was a former feral and wondered why I hadn't noticed this pretty, friendly girl before. Not only did she not mind me patting her, but she actively encouraged the attention. 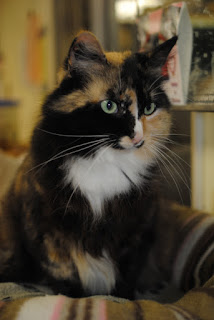 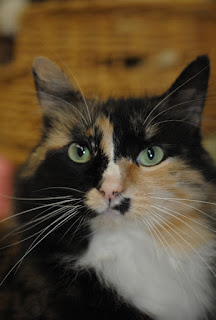