Val is a cuddly one-eyed tabby living in the front section of the sanctuary. On a nice day, she can be found sunning herself in the front courtyard and is more than happy to visit with anyone offering a nice smile and a gentle hand. 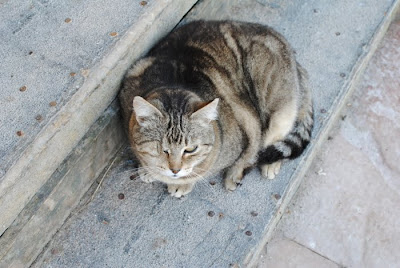 The missing right eye makes her easy to spot among the other front courtyard tabbies vying for attention, but what she's known for is being the mother of several other sanctuary cats: Fury, Foxy, Savannah, Latte and Paolo. What's truly extraordinary about her though, at least to my mind, is that when she came to the sanctuary she was totally feral. 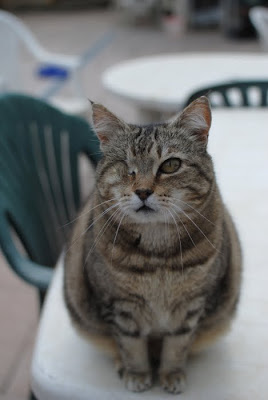 Val is named for Valerie Jones, former Vice President of the North Fraser Port Authority. Valerie had been feeding a colony of feral cats living on Port Authority property near where the then yet to be built Canada Line would connect to the Vancouver Airport. Concerned about the welfare of the cats once construction began, she called upon the help of RAPS to trap them.

Cat Val and her full grown offspring were among the cats trapped and brought to the sanctuary. Human Val would come on a regular basis to visit her former charges, who apparently did recognize her. Unfortunately, Val was diagnosed with ALS (Amyotrophic lateral sclerosis, a.k.a. Lou Gehrig's disease) in 2008 and passed away the same year. The Valerie Jones Memorial Garden, a new area of the sanctuary built with donations from Val's family and friends, was opened in the autumn of 2009 as a legacy of this great supporter of RAPS. 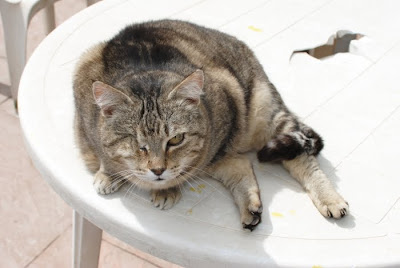 Cat Val, who arrived at the sanctuary boasting not one but two beautiful eyes, had an unfortunate experience earlier on in her time there with an eye infection that progressed so swiftly that there was no way for staff to save the eye. The good news is that it doesn't seem to cramp her style in the least. She continues to thrive and is so full of love that on the off chance she grabs at your hand, it'll probably be only so she can give it a gentle lick. 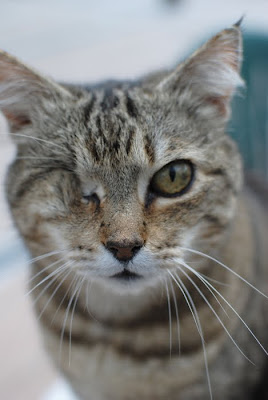 Email ThisBlogThis!Share to TwitterShare to FacebookShare to Pinterest
Labels: Val