A first meeting with Zulu quickly reveals the following information: Zulu is very skinny, very hungry and very loud. It's kind of a domino effect, with each one causing the next, although you could argue that the volume has as much to do with his breeding as it does with his desire for yet another meal. 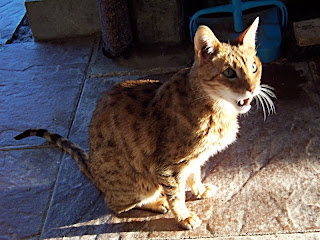 Zulu is a purebred Bengal. His owner must have parted with some serious $$$ for this striking cat and, one imagines since she then had him declawed, even more $$$ on her furniture. I heard that Zulu had developed a peeing problem which led to him being surrendered. This is different than PeeWee's case where she just can't help it; this was serious peeing with intent.

What I didn't know until I saw Barbara Doduk's Blog entry for Zulu, was that the inappropriate urinating culminated in a shot aimed at his owner's head. And the surrendering? Not to the shelter but to a vet clinic which was asked to euthanize the unmanageable cat. It was the clinic staff who asked RAPS to take him instead.

And we're all very glad they did. 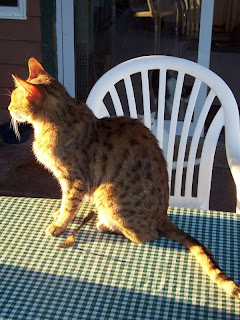 Zulu guards a fork, just in case it might find its way to a can

You may come accross Zulu snoozing or sunning himself, at which time he's a mellow guy, friendly without coming across as overly needy. What he's most well known for, though, is a will-yell-for-food miaow that feels like it must belong somewhere between "subway train" and "power tools" on a decibel chart. That said, he's not only motivated by food (just mostly). Sometimes he just wants to be a purring cat in a basket, softed by a sympathetic hand - though he's quite willing to make some noise if you're slow to comply.
Posted by Claire at 1:55 PM

Email ThisBlogThis!Share to TwitterShare to FacebookShare to Pinterest
Labels: Zulu